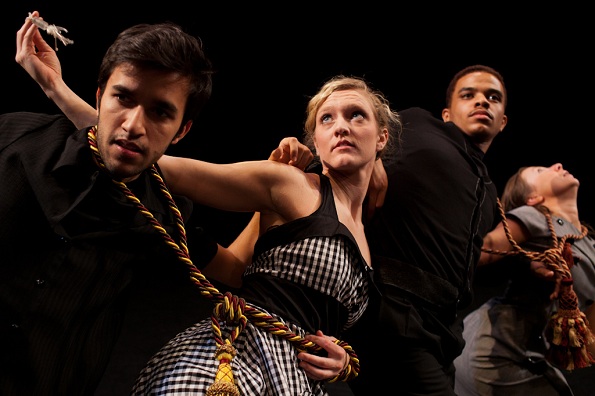 George Staib, Artistic Director of Staibdance, has been a player in the Atlanta dance scene for many years.  Dance Informa sat down with George and Staibdance Managing Director Kathleen Wessel to hear what makes Staibdance unique among Atlanta’s many contemporary modern dance companies.

From February 2nd-4th Staibdance will perform Name Day, presented by Emory University Dance. Name Day is inspired by George’s childhood experiences living in Iran and the identity he developed with Iranian, Armenian, and American cultures.  During the Spring 2011 semester George studied with the famous Batsheva company in Tel Aviv and says he and his work were transformed during that time. George shares, “It hit me over the head when I was in Israel. I realized a kinship with an Armenian guy in Israel”. George felt at home and ‘indigenous’ with the culture in which he was immersed.  “For so long when people asked, ‘Where are you from?’ George would answer ‘Pennsylvania’,” says Kathleen.  “I think part of this is because growing up in PA, he was very much made to feel like an outsider and was teased mercilessly for being Middle Eastern. After finally feeling validated in Israel, he came back a changed person and now embraces his cultural roots.” She adds that as an artist, and as George’s spouse, the “shift makes me happy”. 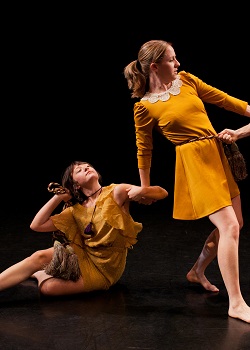 The transformation was personal and artistic.  Before working with the Batsheva company George rarely incorporated improvisation into his creative process.  After being immersed for five weeks in the highly structured Batsheva process for improvisation George admits to being “a totally different dancer with a totally different perspective”.  You can learn more about George’s reflections by visiting the blog he kept during his studies in Tel Aviv – http://movingtowardshome.wordpress.com/

While watching dance in Israel George discerned that “American [choreographers] are using dance to decorate their text.  It’s more about what I’m hearing than what I’m seeing and feeling about the dancers.  In Israel the text was little punctuation marks in the work.  Every [performance] I saw was in Hebrew and I had no idea what was being said though I had my own interpretation.  So often [American choreographers] have to be right and people have to ‘get it’ or we go so obscure that you don’t even want the audience to be with you”.

George, in his uniquely genuine and funny manner, declares that before his trip to Israel he had started to think of his work as “Beef Wellington – a classic dish that nobody eats anymore.  I was doing something that people had already seen.  What I’m working towards now is finding work that is not so political, that is more sociological, and personal.”  He strives to create “something that can be sticky, leaving something on your hands, but you can enjoy it too.  I want people to come away with a feeling and a connection, feeling something but not a political agenda.  It’s the human element.” George’s process and work have grown as a result of his reflections.  He says, “now I have permission to do my work, to go with my gut and not make work through the eyes of the Atlanta dance community”.

Name Day promises to be “a highly physical and theatrical jaunt through a much misunderstood part of the world”. Tickets for Name Day are available through www.dance.emory.edu.

The 3rd Staibdance Summer Intensive will be held this June 30-July 15 in Sorrento, Italy and registrants can expect “lots of individual attention in a very safe and international program”, says George. “It’s an intimate setting. They step off the plane and there’s a Staibdance sign.  From there they are not treated as tourists but are immersed in the culture as contributing artists.” 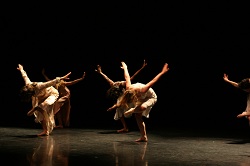 Tuition covers all classes, meals, and excursions and an exciting addition to this year’s class schedule is Gaga classes, which will be taught by a member of the Batsheva Company.  Dancers will also train in ballet, yoga, modern, and a blend of conditioning and Pilates.

“Classes are intense”, adds Wessel.  “Everybody sees what kind of dancer you are and there are a lot of individual comments and attention.  The ‘why’ is explored very deliberately. During the last couple of days we talk about what each dancer is working on and thinking about as a result of the two weeks.  Every dancer gets support.  It’s your time to work without worry about side jobs.  For two weeks this dancing is your job.”  Staib elaborates, “It’s such a gorgeous place right along the Amalfi Coast and for two weeks this is real life.  It’s so satisfying.  It’s also exciting to have new bodies from so many places. It’s a new challenge teaching wise.  We keep class sizes small and that, combined with good energy, makes us able to make shifts in scheduling according to the dynamics of the group.”

The Staibdance Summer Intensive also incorporates a culminating contemporary modern dance performance opportunity for all registrants.  This rare performance opportunity is made even sweeter by the fact that it takes place in Sorrento’s beautiful Parco Ibsen Amphitheater.  “We were brought to Sorrento to expose modern dance to an area of Italy that hasn’t seen this type of dance.  This free public concert is a gift back to the city”, explains Staib.  Performance pieces for the concert will stem from Staibdance’s repertoire and, for the first time this year, a piece created during the Intensive.

The ideal candidate for the Staibdance Summer Intensive is a dancer of any age over 18 who has dance experience of at least the intermediate level and who is open to learning about new cultures, taking risks and meeting new people.  For more information visit http://sites.google.com/site/staibdance/