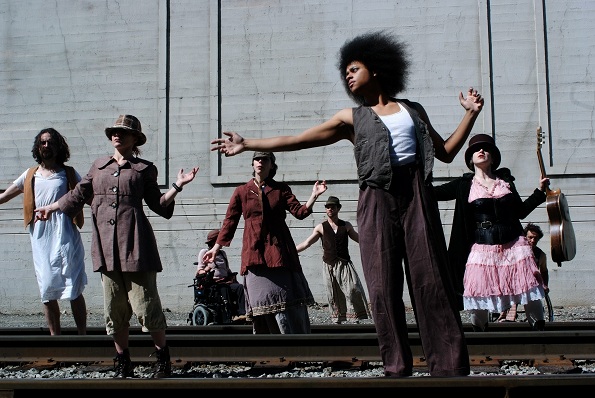 San Francisco-based Dandelion Dancetheater is a dance company that is doing something different.  Founded in 1996 by Eric Kupers and Kimiko Guthrie, Dandelion takes dance-theater experimentation seriously.  Lots of companies strive to be innovative, cutting-edge, state-of-the-art, etc. but they still tend to fall within the parameters of traditional dance.  There is a form and thus a function.  Dandelion Dancetheater doesn’t seem to think that way.  Their most recent performance, Radical Inclusion: Conversations at the intersection of art, spiritual practice, and social activism, brought together theorists from the realms of art, activism, and spirituality to discuss interdisciplinary experimental art that draws from diverse inputs.  Dandelion is known for using dancers who are untrained, differently-abled, old, young, large, small, and from every culture and background, in addition to formally trained dancers.

I had the opportunity to experience the company (and I do mean ‘experience’ and not simply watch) during their NYC residency at Baryshnikov Arts Center.  I was struck by Don’t Suck, a series of vignettes spanning a great variety of movement that at times had the dancers expertly wielding wheelchairs, crutches, voice, violin, puppet heads, and even a slew of tennis balls.  The piece culminated in a voting session where the audience decided a winner and a loser of the performance.  The results were announced and discussed in front of and including everyone.  I asked Eric and Kimiko, as well as classically trained company dancer Julia Hollas, to give their insight into how Dandelion Dancetheater is changing how we consider dance.

When I watched/voted in Don’t Suck, I was blown away because I’d never seen anything quite like it.

Eric
That’s my hope, that our work will act as a waking up device and jolt people out of their everyday consciousness. Whether they like the work or not, we hope they at least pay attention to what is unfolding in the present moment.

When incorporating elements that are absent from our traditional construct of concert dance, do you hope that the audience questions your choices?

Eric
Questioning is fine, but it’s more important to me that audiences bring some kind of fresh attention to the work and don’t lump what they are seeing into categories based on what they’ve seen before. 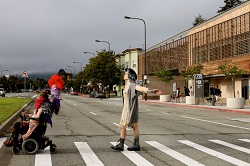 Kimiko
My hope is that all the elements used – be they traditional dance, song, words, non-trained dancers dancing, etc. – are not seen as separate, but rather experienced as integral aspects of the particular world of the piece.  That’s my hope for at least the actual viewing, which is ideally felt more wholly, like a wave washing over you.  Then later that evening or the next day, I think it’s great to question the work and why certain choices were made, because that always takes one closer to the core of a piece.  If those questions include ‘why are non-traditional aspects included?’, I would hope that person would eventually realize that they were included not to make a certain point separate from the heart of the piece, but because they were necessary to create the overall effect.  That’s why I don’t love that our company usually falls under the “dance” category; I think “performance art” is a better fit.

Do you hope that at some point a show with diverse dancers will not be something to discuss, but that these elements will be accepted just as well as the cookie cutter ballerina?

Eric
Actually I’m hoping that the kind of diversity we strive for will be even more accepted than the cookie cutter ballerina ideal. It’s not that I have anything against tall, thin, ballerina-type bodies. It’s rather that I want them to be appreciated as part of the wonderful diversity of human forms. There’s room for everyone.

Kimiko
Yes, I do.  One of the grandmothers of modern dance (maybe Duncan?) said something like “dance is always fifty years or so behind the other arts in sophistication because it has to do with the body and the body is the site of such baggage and oppression”.  One would never tell a visual artist her lines were just too fat.  We see dance as being “pretty” rather than expressive and interrogative.

Julia
I think that we’re after the same end: through performance, to explore our deep inner natures and share those truths with the audience.  The challenging part is that we have completely different methods of getting there.  We’re not just diverse in the fact that one person plays the guitar and has had some dance classes as a college student; someone else plays the violin, does yoga, and has never had formal dance training; one person has extensive modern dance training; and another has done mostly ballet – we’re diverse in that we each have incredibly different approaches to what it means to have an artistic practice.  Get that in a room, and you’ve got two things: absolute chaos and a deeply rich community with infinite possibility for expression.

If we get to the point where incredibly different performers occupying the stage together is no surprise, do you think there will still be a place for it?

Eric
Yes, definitely. I don’t see our commitment to diversity as simply a reaction to the oppressive and limiting trends I see in the dance world, but instead it is a vision of how I hope things to be in the future. The great thing about diversity is that it is infinitely interesting. There’s always something new as long as there is another person in the universe.

Do you discuss with your dancers what it feels like to be part of a non-traditional company composed of individuals outwardly different from each other?

Eric
We do a lot of discussing of this and other issues, and a lot of emotional processing as well. So much gets stirred up in every project I direct and I view the discussing of what has arisen for everyone as an essential part of the rehearsal process. Some of the ensemble members like that, but some find it uncomfortable and would rather just get back to movement and/or music.

Julia
As someone who would really rather just dance than process, I have to say that I am constantly challenged by being a part of Dandelion.  I simultaneously dread our “emotional processing” and find it incredibly helpful.

Was “inclusion” something you’ve had in mind since the creation of the company, or have these ideas of unraveling the norm and exposing social issues emerged over time?

Kimiko
I think we’ve always thought of dance as a tool to explore social issues, a means and not an end.  So in that way, we have always been committed to expressing ideas using whatever materials and mediums (sizes, shapes, colors, textures, etc.) are available and that best suit the work.  For me it’s more about not excluding what is needed for that particular piece of art than including it just for inclusion’s sake.

Where do you see the American dance scene heading in the next decade?

Eric
I hope we’ll see more companies like Dandelion in the future. A big danger I see in the dance scene is artists and companies striving so hard for financial stability and popular acceptance that the work becomes watered down with commercial values. These values (that are fed incessantly by TV and other popular media) are exclusive, self-hating, disembodied, overly focused on outside criteria, narrow-minded, and boring.

The one thing that I see as a positive effect of the economic downturn is that financial success is even more difficult to obtain for dance artists, which is leading some to return to what I see as the roots of modern dance: rebellion, innovation, truth-telling, complexity, mystery, and a priority placed on the process of creation. The best of modern dance has always been at the edges that are pushing into the unknown. It means the form never really has commercial success, and I don’t think it should. This form exists to lead the way through challenging times, to help us think about things in new ways, and to remind us to return to our bodies, the present moment and the ultimate “unknown-ability” of the universe.

Julia, you grew up with a classical ballet and modern background, even training in ballet at the University of Utah.  You have very classical roots!  What drew you to Dandelion?

Julia
I probably gravitated towards classical ballet and modern dance because I needed something that, through rigorous study, would allow me to unlock and observe myself.  I like the repetition of ballet, I like the purity, I like how exact it is, and for a long time all I wanted to do was join a ballet company.  One summer when I was home from college, I went to see a touring performance troupe.  This performance combined beautiful, fluid, movement, striking video, and theatrical elements which ripped at my heart.  It was the first “dance theater” performance I had ever seen, and the beginning of the end of me seeking ballet as an end unto itself.  I think it was a few months into working with Dandelion and Eric that I discovered that he had been in the dance theater performance I saw!

Years later, I now see ballet as an extremely valuable tool that allows me to both open my body to a wide array of expression, and a way of challenging and thus learning more about myself internally.