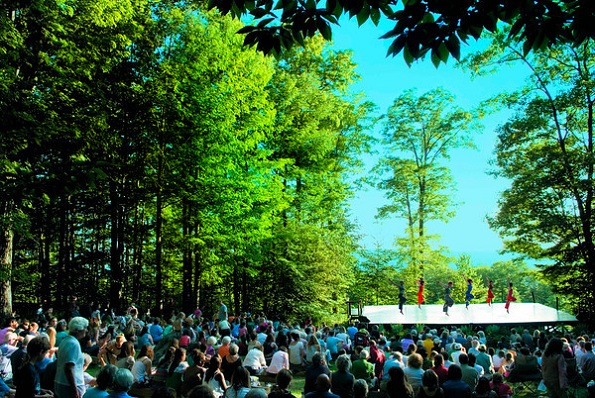 January 2012 will kick off the momentous 80th Anniversary of Jacob’s Pillow Dance Festival, a National Historic Landmark, National Medal of Arts honoree, and America’s longest-running international dance festival. Founded in 1933 by modern dance pioneer Ted Shawn as a retreat for his company of Men Dancers, Jacob’s Pillow has been a mecca of dance for eight decades. Nestled in the beautiful Berkshire Hills of Western Massachusetts, “the Pillow” is acclaimed for its rich history, unique and beautiful location and atmosphere, and forward-thinking international programming of the highest quality. The international celebration of dance, music, the visual arts, and culture begins June 16 with the 80th Anniversary Season Opening Gala and continues through August 26. 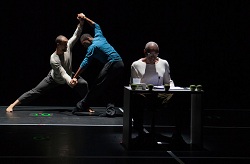 Executive and Artistic Director Ella Baff comments, “The 80th Anniversary Season celebrates Jacob’s Pillow’s history-making contributions to dance over eight decades, beginning with early 20th century pioneers Ruth St. Denis, Ted Shawn, and the Men Dancers. This year’s Festival also affirms the Pillow’s steadfast commitment to new and important dance-makers and performers, as well as unique presentations that give artists and audiences opportunities to discover new things about dance. There is no other place like Jacob’s Pillow; it is truly unique. It is a destination – a nexus for dance that generates inspiration and is enjoyed by people from all over the world as well as right down the road. We look forward to welcoming everyone to this year’s particularly special Festival.”

Baff affirms her dedication to presenting dance of many forms and styles from around the world with an 80th Anniversary Festival that features companies spanning nine countries and five continents: Australia, Brazil, Canada, China, Finland, France, Germany, Israel, and the United States. The Hong Kong Ballet, Morphoses, and Vertigo Dance Company are among many troupes that will make their Jacob’s Pillow debuts. Companies with historical connections to Jacob’s Pillow include The Joffrey Ballet, returning for the first time in nearly 50 years, and Canada’s Royal Winnipeg Ballet, which made its 1964 U.S. debut at the Pillow.

Once-in-a-lifetime engagements will also be presented. A weeklong homage to Ted Shawn and his Men Dancers will feature a 20-member cast of some of the greatest male dancers and choreographers of today including Lar Lubovitch, Jason Samuels Smith, Arthur Mitchell, David Neumann, Trent Kowalik, Cartier Williams, and Jock Soto, among many others. 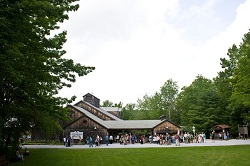 Three specially selected “Back by Popular Demand” productions will be discovered anew by audiences. Ella Baff comments, “I hope to encourage the public to consider more contemporary dance works as classics, to be revisited in the same way that we enjoy and deepen our appreciation for classic works of music, theatre, and the visual arts.” This series includes Tero Saarinen’s powerful Shaker-inspired Borrowed Light, which premiered in the U.S. at the Pillow in 2006; 2011 Jacob’s Pillow Dance Award recipient Crystal Pite’s stunningly accomplished work Dark Matters; and Doug Elkins’ insightful and hilarious Fräulein Maria, first performed at the Pillow in 2009.

While the Festival is a centerpiece of the 80th Anniversary Year, programming takes place year-round. Throughout the year, new additions are constantly contributed to Virtual Pillow, an ever-growing online collection including PillowTalks, educational resources, Jacob’s Pillow Dance Interactive, and contemporary and archival dance videos, which have amassed more than 800,000 views to date worldwide. Artist residencies bring the innovative Jacob’s Pillow Curriculum in Motion® program to schools, using movement to advance and enhance classroom learning for students and teachers. Visiting scholars and fellows from around the world use the Jacob’s Pillow Archives as a vast and unique resource for significant dance research. 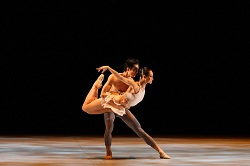 Year-round Creative Development Residencies support artists as they create new work in the Pillow’s retreat-like setting; these new works often premiere at the Pillow. On March 24 and 25, the Pillow and MASS MoCA will co-present Australian contemporary company Chunky Move in their newest production, Connected.

A signal Anniversary celebration includes the release of Never Stand Still, a feature-length documentary about dance, dancers, and Jacob’s Pillow by award-winning director Ron Honsa, narrated by Bill T. Jones. The film will make its New York City premiere at the 2012 Dance on Camera Festival on January 27.