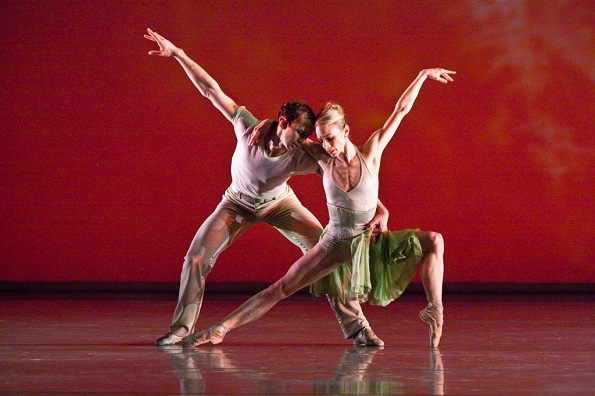 What a triumphant start to the new season for Atlanta Ballet. Although Georgia’s premiere ballet company didn’t present what I was expecting, I was pleasantly surprised and inspired by the evening of dance I witnessed.

Opening with James Kudelka’s modern take on The Four Seasons we were treated to exquisite dancing and difficult, yet flawless, pas de deux work.  With the familiar, time-honored music of Vivaldi I expected full tutus and large, grand traditional balletic numbers.  Kudelka’s sensitive and at times quirky choreography, matched with flowing modern costumes, was a welcome surprise.  The soft color palate and blank stage could have made for a very plain ballet, but the execution of Kudelka’s well-designed choreography made the seasons flow seamlessly and they took us on a breathtaking journey through Spring, onto Summer, Autumn and lastly Winter.

The ballet followed a central character of a man traveling through life’s seasons, until the bitter cold of Winter and his ultimate death.  Assured dancer John Welker played ‘The Man’ with grace and poise. Peng-Yu Chen in Spring and Tara Lee in Autumn were both stunning and a joy to watch. Summer brought on a more passionate and fiery dance with Christine Winkler partnering Welker. Christine was ravishing. She is a strong, committed and elegant performer.

The dancers displayed stunning lines, very neat, quick footwork and explosive jetés. Apart from a few minor stumbles and mistakes, probably due to opening night jitters, the dancers were brilliant. The audience was even treated to a dance performance by John McFall, Artistic Director!

Kudelak’s adaptation on The Four Seasons was light, airy and like the gentle changing of the wind. Each season brought beautiful dancing and stunning artistry to the stage. Honor must also be given to Atlanta Ballet Orchestra and talented violin soloist Lisa Morrison. 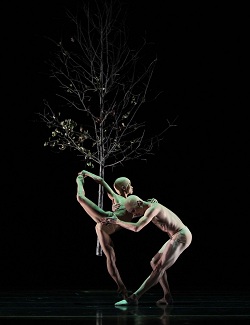 In contrast, we then witnessed Eden I Eden by ground-breaking choreographer Wayne McGregor. With the performers all in nude tones, dancing around an illuminated tree center stage, one felt as though they were being given a rare look into the Garden of Eden.  Opening with an intriguing, yet almost disturbing video projection entitled “Dolly”, which asked questions about cloning, genetics, natural selection and evolution, the audience were thrown into a discussion about life, its origins and the ethics involved in the manipulation of creation.

In a bold, unconventional performance the dancers brought McGregor’s themes to life as they contorted their bodies and showed us their strength, stamina and determination. In a non-stop performance the dancers proved that they are truly athletes as their perspiration literally flew across the stage. With the dancers all in nude, with nude head caps on for the beginning piece, it was hard to tell each performer apart.  However, as the piece progressed the individuality of each dancer began to shine.

In Eden I Eden McGregor raised many questions about the use of technology and the future of humanity, but he provided no answers or resolution and left us all speechless with his concept and unabashed, raw yet technically exquisite choreography. McGregor, however, left no questions about the talent of Atlanta Ballet Company.