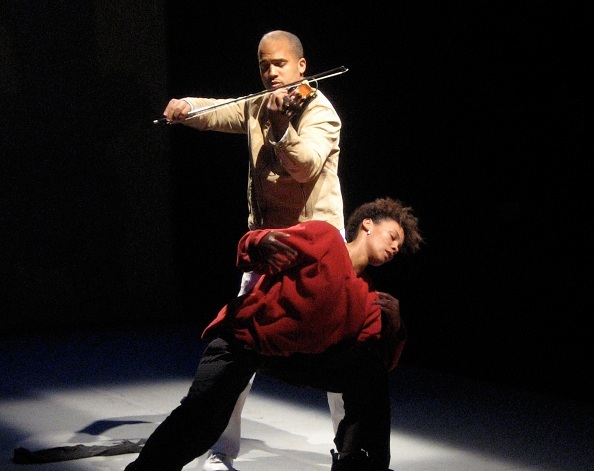 As a self-proclaimed dance geek, I regularly make a point to attend the myriad of performances and events that circulate around New York City. In my humble experience of seeing dance at every given moment I can, I rarely come across a performance like the one headed by Daniel Bernard Roumain in his world premiere of Symphony for the Dance Floor.

Roumain, also known as DBR, is a Haitian-American renegade violinist and composer who has shared the stage with everyone from Phillip Glass to Bill T. Jones and Lady Gaga. In his third commission by the BAM Next Wave Festival, DBR showcased his zeal for collaborative efforts, combining music, dance, video, and design in a fast-paced, high-tech showcase of talents. Video featuring photography by famed photographer Jonathon Mannion, known for his portraits of hip hop artists like Jay-Z and Eminem, and choreography by Millicent Johnnie of Urban Bush Women, made the show a whirlwind of urban energy. Nods to the landscape of New York City, hip-hop music, African dance, and Haitian culture came together in an exciting array of theatricality.

DBR has no formal training in dance, nor is he an aspiring choreographer or performer. In all fairness though, it should be mentioned that he is the former Music Director of the Bill T. Jones/Arnie Zane Dance Company and, I was told from sources close to the artist, that he once had a stint as the accompanist at the Martha Graham Company. However, it is evident that he has a deep appreciation for the form. He made a point to include Johnnie’s dynamic and kinetic movement in a show that would’ve been just as compelling without any dancers. DBR even included ‘dance’ in the title of his show, a telling quip for the emphasis he wanted to make.

In my humble, modern-dance-loving mind, it gave me hope that other artists are brave enough to branch out of their conventional performance equations and find something new to bring to the table. All artists can benefit from this approach, especially at a time when funding and venues are an increasing impossibility. Most importantly, I left the performance with a deeper appreciation of not only the art I am so obsessed with, but the other forms that were showcased as well. The music, the video, the fashion, the lighting were all in cooperation and, what’s more, in appreciation of one another. A recent New York Times article (found here: www.nytimes.com/2011/11/05/arts/dance) questioned this melding of live music and dance. I immediately thought of DBR’s Symphony after coming across this article. He is able to offer a completely different perspective on this conversation and I only hope it’s one the dance world continues to have.

What do you think? Is live music in dance necessary? When is it too much? Sound off! Leave your comments below or shoot me an email at tarasheena@gmail.com.