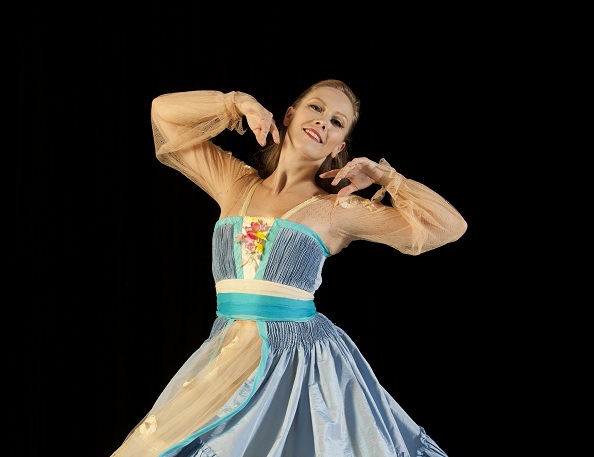 Last Friday night audience members packed into The Dance Gallery, New York Theatre Ballet’s in-house performance space, for this fall’s informal performance series, Dance on a Shoestring.  With parents seated cozily together on chairs, and children resting on plump purple pillows, the tone was set for an evening of cheerful amusement. The audience awaited the first unveiling of choreographer Keith Michael’s all-new Nutcracker, as well as other works performed by New York Theatre Ballet’s children division, company members, and David Parker and The Bang Group.

The program began with Parker’s  excerpts from ‘Misters & Sisters’,  an amusing, lighthearted,  cabaret of sorts.  Dancers Nic Petry and Amber Sloan began by performing an elegant waltz, which was shortly followed by a rendition of In My Own Little Corner, performed by Parker and Jeffrey Kazin.  Dressed in jeans and sweatshirts, they comically sang lyrics of love and fantasy while stripping off their clothes to reveal sparking gowns and, in Kazin’s case, pointe shoes.  The piece morphed into a hilarious interpretation of Sisters, complete with giant feather fans.

The program then altered course with Antony Tudor’s Tirolese from ‘Soiree Musicale’, a lovely duet performed by dancers Elena Zahlman and Mitchell Kilby.

Next, and my personal favorite of the evening, was The Ribbon Dance from ‘La Fille Mal Gardee,’ an ensemble piece performed by the NYTB children’s division.  These young ballet dancers performed with both abundant delight and determined precision, which exemplified NYTB’s commitment to honoring ballet classics while encouraging the talents of young, eager students.  The dancers performed enthusiastically and graciously, their love of dancing evident to all in the room.

Following this joyful piece was the sneak preview of Keith Michael’s new production of The Nutcracker. After performing Michael’s old version of this much-loved ballet for 26 years, NYTB felt it was time to revamp their production with new choreography, new sets, and new costumes.  Time will tell the success of this Nouveau Nutcracker, as NYTB is calling it, but from the excerpts seen last Friday, audiences can expect a delightful, whimsical, and romantic journey into the magical world that audiences have learned to love and expect from any production of The Nutcracker.

Petease, choreographed and performed by Yukiko Kashiki with dancer Joshua Andino-Nieto, was the most cryptic and melancholy work of the evening, but certainly an intriguing and physically beautiful duet set to music by George Gershwin.  Then, young dancer Benjamin Levine showed off both his performing and choreographic talent with The Stick, a playful, mischievous work developed during the 2011 Summer Camp organized by the NYTB’s LIFT Community Service Program.

Ending the program was A Rugged Flourish, choreographed by Richard Alston and performed by NYTB dancers.  The lead male hero was portrayed by Steven Mendelez, who danced with exceptional strength and precision while retaining the rawness of spirit that the role demanded. This moody, mature work demonstrated the dynamic range of NYTB’s repertoire and finished off the evening with a determined sense of accomplishment.