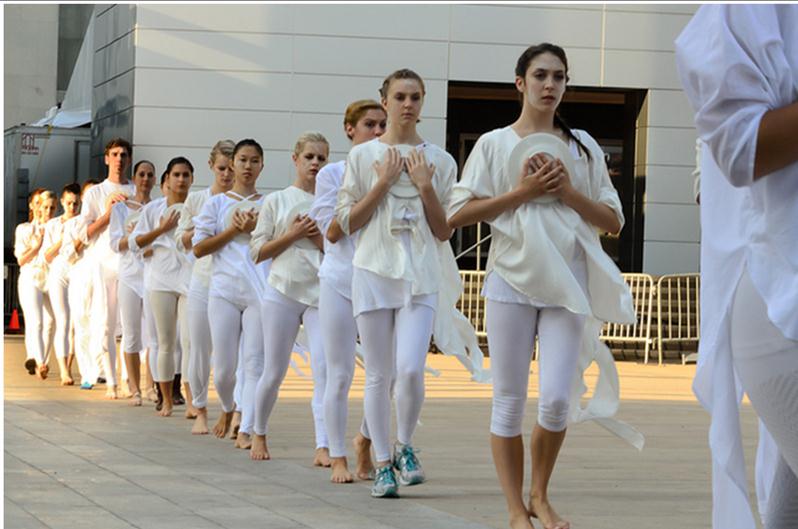 Honoring the 10th Anniversary of 9/11 in New York City

September 11th, 2001 was a tragic day we will all remember forever. Now, 10 years later, New Yorkers honored the anniversary of this tragic event in a myriad of ways. Some chose to stay home with their families. Others attended church services and memorial events. Artists of all genres produced work and organized their own events to reflect upon and remember 9/11, and the dance community was no exception.

Uptown to downtown, dancers and choreographers honored those who died on 9/11 with the movement of their bodies. Jacqulyn Buglisi, artistic director of Buglisi Dance Theater, orchestrated The Table of Silence Project at Lincoln Center Plaza in partnership with Dance/NYC and The September Concert.

Beginning at 8:15am on Sunday, September 11, 2011, 100 dancers from various dance institutions, including Buglisi Dance Theatre, The Julliard School, STEPS on Broadway, and several others, performed this site-specific work. The dancers, all dressed in flowing white costumes, moved in geometric patterns surrounding the fountain, using intermittent gestures of pain and prayer, until they finally found themselves seated with arms raised.  At 8:46am, the exact time the first plane flew into the World Trade Center’s North Tower, the dancers  were entirely still with their arms lifted to the sky.

The Table of Silence Project was a collaborative work between Buglisi and Italian artist Rosella Vasta.  Vasta’s sculpture 100 Terra Cotta Plates, a work symbolizing the banquet table that unites humanity, gave Buglisi inspiration for this piece. According to Buglisi, the dancers at Lincoln Center Plaza were intended to be the personification of the plates. “I wanted to create a work where people could come to the table to listen,” Buglisi said.

Buglisi hoped that through her movement, she could bring about healing energy to the community of New York and beyond. “I have a very strong, powerful belief in the universal language of movement to promote peace and tolerance,” she said.  “The energy we send out can change the world.”

Farther downtown, The Joyce Theater, one of New York’s premiere dance performance venues, presented two concerts at Nelson A. Rockefeller Park on September 10th and 11th at 5:00pm. These commemorative performances featured the Limon Dance Company with Voices of Ascension and the Paul Taylor Dance Company with the Orchestra of St. Luke’s. Also on the program were Alvin Ailey American Dance Theater’s Matthew Rushing, and a world premiere by choreographer Jessica Lang featuring dancers Clifton Brown and Jamal Roberts with musicians Yacouba Cissoko and Sam Dickey.

Lang said that it was an honor to have been asked by The Joyce to choreograph for this event. “I think it is a wonderful opportunity for the audience to recognize how important the presence of art is in the efforts to rebuild the community,” Lang said.

Lang mentioned that this piece was very important to her, and she also noted that choreographing a commemorative work like this had altered her typical approach to choreography. “I want to carry the message of hope, but I also want to be respectful to all the emotions that come along with the memories of that day.   Most of the time when I make a piece it might be something of a personal idea to me that carries universal images which speak to the audience.  But this time, it is a universal event that everyone experienced and there is a different sort of responsibility I am feeling.”

Taking her work all over the city, choreographer Sarah Skaggs presented “9/11: A Roving Dance Memorial” at Union Square Park, Washington Square Park and Battery Park. These 11-minute dance installations occurred at various times throughout the afternoon on September 11. The installations, based on a solo Skaggs choreographed after the attacks in 2001, also took place in Washington D.C. and Shanksville, PA.

Dance New Amsterdam, one of New York’s most progressive and prominent downtown dance centers, moved to their current location shortly following the 9/11 attacks 10 years ago. Part of their larger mission was to revitalize the Lower Manhattan community after 9/11. DNA commemorated the 10th anniversary by asking dance artists how 9/11 affected their work and then showcasing their video submissions on a flat screen in DNA’s lobby.

Dancers all over New York found ways to use their art form as a way to honor the victims of 9/11. Amalgamate Dance Company even honored working dog teams, veterinarians, and VMATs who served during 9/11 with their work In the Beginning at Liberty State Park.  Dancers and dogs alike were affected by the tragic events 10 years ago, and the anniversary offered an opportunity for dance artists to reflect and remember how their lives and their work has changed.

Jacqulyn Buglisi was in New York when the towers fell.  “Artists here in New York have a deeper appreciation of our freedoms since 9/11,” she said. “Art always reflects the time in which we live. We are making that imprint in many different ways. “