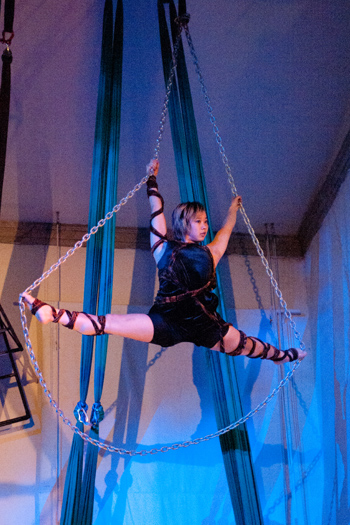 D’AIR only produces and performs one full length piece each year, focusing the rest of their time and efforts on after school teen programs, community classes and residency programs for local youth outreach organizations. With such a focus on teens, the aerial dance theater company incorporated their younger students into this year’s show as dancers, stage hands and even aerial artists. The teens, although not strong in their dance technique, obviously enjoyed the experience as they beamed from ear to ear and ran about enthusiastically. The inclusion of the local youngsters brought about a community atmosphere and although it gave the show at times an amateur feel, it was very sweet and well appreciated by the audience.

Untamed started off slowly, but grew in momentum and spectacle as the show progressed. The first act was humorous and a little silly as the performers set the scene for the story.  The younger members of the audience were very amused.  A jazz dance solo by Beth Del Nero was pleasant, but she lacked audience engagement as her eyes were down for much of the piece. She is, however, a technically strong dancer. 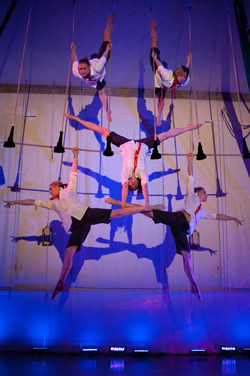 Both Acts 2 and 3 were quite outstanding and had the audience on bated breath. We enjoyed a soundtrack that included everything from music from Chicago to the Austin Power’s theme song, and even Love Is in the Air. Act 2 opened with two young teens performing a routine from a hanging hoop. They were very talented!

A routine called ‘Slight of Hand’, where all five lead female performers climbed a large trapeze and made daring shapes and patterns, was well choreographed and very clever. It showed the artists’ skills to not only perform on their own, but work as a team.  They displayed impeccable timing and grace, as they didn’t clamber about, but moved slowly and assuredly.  Although they made the routine look easy, I was a little nervous watching as with one slip, they would all fall – and they didn’t have harnesses!

Act 3 was the highlight of the program as the ensemble showed off the best of all apparatus. All artists seemed to take their performances to the next level and commit to their characters and execution. A solo by Saki Taniguchi with a chain was astounding. Saki’s slow extended lines followed by sudden attack and daring drops kept us on the edge of our seats. Saki was awe-inspiring and a standout performer.  Justin Evans on a rope showed us why he is an artist to watch. Executing tumbling skills throughout the show and then spectacular rope work, he seemed to have countless tricks up his sleeve. In Act 3 we also enjoyed beautiful silks work, a committed cage performance and even a hip hop/jazz style dance by the entire cast.

Untamed was a mixed bag of tricks. It was at times humorous and fun, and at other times mystical, daring or beautiful. D’AIR Aerial Dance Ensemble should be proud of their astonishing aerial skills. They are all strong, incredibly fit, flexible and brave! I was thoroughly impressed by the performers’ talents as well as their heart for teens and the local community.