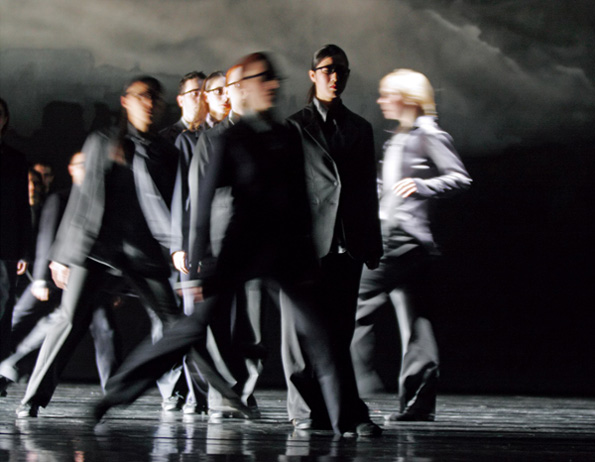 One of the leading contemporary companies, nay, dance companies in the world resides in Den Haag, Netherlands. Now under the direction of alumni Jim Vincent, Nederlands Dans Theater began in 1959 by 22 dancers from the Netherlands Ballet who wanted to create a style of their own. A half century later, NDT’s choreography, repetoire and dancers still reign as innovative, unique and rich with unparalleled athleticism, expression  and technique. Most notable are the company’s works of former Artistic Director, Jiri Kylian, a true pioneer in contemporary dance.

I was honored to sit in the audience of the Dorothy Chandler Pavilion, on a stormy Los Angeles eve, to take in the performances of Nederlands Dans Theater I. Their visit to LA was one of only a few stops in the US, so you can imagine how hot this ticket was! NDT’s highly anticipated repertoire included two works: The Second Person, a creation of the marvelous Crystal Pite and Silent Screen, the vision of dynamic duo Paul Lightfoot and Sol Leon.

The evening began with Crystal Pite’s The Second Person. Never once did my mind wander or question what was in front of me. I was mesmerized by the tale, the feelings, and the concept. First of all the aesthetic was seamless, and beautifully disturbing. How 24 dancers can move in effortless unison (especially while wearing mens suits) is beyond me! Their precision lent itself perfectly to the sometimes militant like formations and almost robotically sharp movements, executed to intense musical accents and a voice saying things like “this is your head, your neck, your back…”.  These large group sections were opposed by solos and duets, largely exhibiting fluid, controlled, technical movement, motivated by expressions ranging from comical to introspective,  to sad. The golden thread in this piece was a wooden marionette controlled by groups of dancers roaming the stage and even climbing on another at one point. I came away with the perception that the puppet was speaking as the narrator (the voice we heard), and it seemed to take us on a journey of what it’s like to act, feel and move differently from the rest of society and its norms. With small breaks of laughter, comedy and smiles, this dark tale concluded with the most breathtaking finale of one dancer as the life-sized marionette being controlled by the crowd.

There were so many inspiring and engaging moments. The in unison floorwork in the first scene, where the stage almost looked like it was shifting from side to side, and the audible laughter of the crowd during the ‘this is joy’ section were highlights. A female duet where the dancer’s limbs were constantly intertwined and supporting each other’s weight was loving and optimistic. The finale section was outstanding.  Pite showed her choreographic brilliance as 23 dancers controlled the live puppet with strings attached to her arms and head. Crystal Pite is truly an innovator! 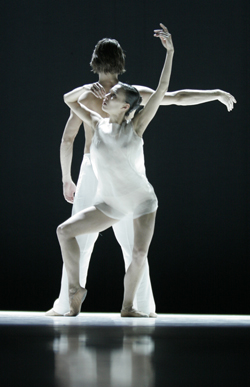 Silent Screen was a fascinating blend of dance, film and depth. By ‘dance’ I’m referring to the seamless blend of fast gestural movement, mixed with intricate partnering and a high degree of technical difficulty, as seen especially in a male solo and duo, and a pas de duex with the dancers dressed in stark white. By ‘film’ I mean the three screen panels spanning the stage projecting black and white footage of scenery and lone people during the opening and closing of the piece. And by ‘depth’ I mean both the literal use of space as well as a depth of the mind and heart.

My favorite section was the opening scene with a silent movie playing whilst a duo danced in and out of the story on the screen. Lightfoot/Leon chose to end this piece the way it began, but the film was reversed in order. Ingenious! The way the movie screens slowly floated upstage revealing another soloist and duet in the deeper portion of the stage was magical.  At another moment a woman slowly walked from the orchestra pit to the back of the stage while a man danced behind her. She wore a strapless dress with a skirt of delicate material that followed her from the orchestra pit and spanned the entire stage! What a clever use of material, space and movement.

My only criticism of Silent Screen is a very small one. I did not enjoy the ‘space scene’ shown in the movie. It showed a group of bright stars, but it reminded me of being on a Star Wars Disneyland ride – it just didn’t match the other footage.

The emotional tone of this piece was ever present, spanning the spectrum of feelings by the ten cast members. Silent Screen wasn’t pointing to a particular story line, but rather to ‘great themes of life’, as printed in the program. I truly fell in love with this one!