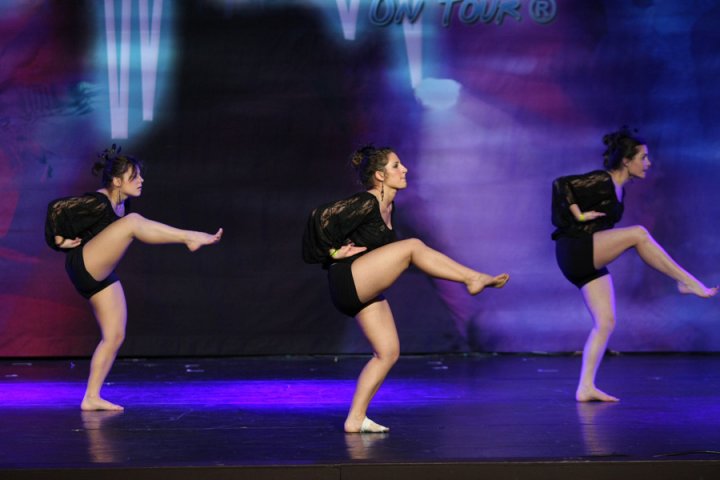 In today’s modern age we so often communicate wall to wall, instead of face to face. We chat through cyberspace with email, sms and facebook, and can replace genuine, intimate, in person conversation with a brief wall post or status update. In Wall-to-Wall Project 7 aimed to break through this mould and bring a raw and uncontrived dialect to the audience, speaking to us through movement, and sharing their passion for life, love and each other.

As choreographer Cherrise Wakeham explained, this showing was a look at Project 7’s ‘greatest hits album’. It was a display of their most powerful and award winning pieces from their short four year history.  As such, it was an eclectic mix of contemporary and commercial dance, with deep, emotive pieces mixed with the fun, fast and upbeat.

Act One was challenging and emotional. Every piece showcased rich contemporary choreography with themes of love and loss.  The dancers shone as strong and committed technicians with a raw and truthful energy. Be Your Love, which was chosen as a Top 25 finalist in the Capezio Ace Awards last year was the stand out piece, involving strong partnering with guest artist Taylor Bradley. The choreography was intuitive and used every element of the music. The dancers were flawless and lived every step.

The Letter by Mary Frances Doss was intimate and heart wrenching. As members of the audience sobbed, Mary Frances danced to the words of a letter written to her deceased mother. With no music and only words, coupled with beautiful and passionate movement, The Letter was a look into Mary Frances’ broken heart. In Act One every number brought something rich and powerful to the stage.

Act Two was a distinct change with more upbeat and fast, jazzy numbers. This was a much needed light hearted change from the first act. I believe the programming would have benefited from a different order of the dance pieces.  If at least one of the faster upbeat numbers was presented in the first act it would have brought some variety to the segment and a chance for the audience to breathe. Cherrise Wakeham has a fresh and distinct choreographic voice that is different, yet striking. However, the contemporary numbers performed contained several of the same types of gestures, motifs and movements, and although very interesting, it sometimes got a little repetitive for the audience as we watched similar contemporary pieces danced one after the other. Each number, however, was highly engaging and performed with excellence.

Creeper, with the use of rocking chairs, was ingenious as it brought a little ‘grunge’ to the stage and Freewave, involving a long wave like platform, was whimsical and creative. Dances Smile and Collapse were isolated, fast, dynamic and extremely entertaining. These were crowd pleasers as the audience grew distinctly more rowdy in the second act.

Renee Locher, a talented and expressive dancer, gave a wonderful solo to The Minnow and the Trout, but I was left wanting more. There were several moments of musical crescendo where she would run as if she was preparing to leap, but then wouldn’t. As she entered for the finale with a beautiful elevated jeté I wished we had seen this in her solo, as she is a technically strong dancer with wonderful extension and elevation. She gave so many snippets of brilliance, but I knew she had more in her and I wanted to she her push the boundaries.

A distinctive aspect of the evening was that the dancers themselves introduced each number. This made the works more personal and gave us the story behind the choreography and the dancers’ own perceptions. I appreciated the personal touch and felt that it worked well with the theme of communication and the building of relationships. The dancers grew more and more out of breath as the show progressed, so the later speeches were quite raspy, but this just added to the realness of the performance and brought a smile to our faces.

Project 7 boasts a talented group of dancers and a true creative genius in Artistic Director Cherrise Wakeham.  The company has a bright future ahead and is a testament to what hard work, dedication and a commitment to creativity can achieve.