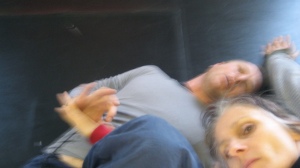 Philadelphia – FALLS BRIDGE: new movement, improvisation and performance festival is a weeklong festival focused on improvisation that will occur for the first time ever on January 10th-16th.

Is improvisation an obscure niche? Or is it a practice that trickles, gushes, and spills in all directions, saturating the work of performance artists of various aesthetics, generations, mediums, schools of thought, and career paths?
Falls Bridge festival, directed by improvisers and movement educators Curt Haworth and Nicole Bindler, will delve into these questions by offering classes and performances to the community.

Falls Bridge is partially supported by Philly PARD, a maturing organization dedicated to the creation and implementation of affordable programs that nurture and initiate discourse and experimentation in dance and movement-based art forms. It is also supported by The University of the Arts and Mascher Space Coop, an artist-run, non-profit home for new dance in Kensington.

Classes with K.J. Holmes, a New York-based dance artist who has been exploring improvisation as process and performance since 1981, will be held at The University of the Arts for free. Classes serve UArts students, the Philadelphia dance community, and beyond and are already at full enrollment. K.J.’s workshop will include training in contact, improvisational and experiential practices and performance that will culminate in a student showing open to the public.

In addition, performances at Mascher Space will be an opportunity for the public to experience the work of K.J. Holmes and Philly’s multifaceted improv. community. Falls Bridge performers run the gamut, and the juxtaposition of each artists’ work against that of his or her peers will make these mixed-bill programs infinitely more rich and intriguing. The lineup is as follows: