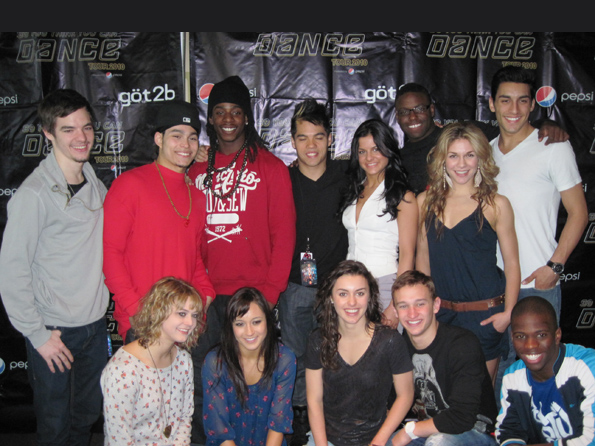 Fox’s dance phenomenon So You Think You Can Dance is already busy auditioning for season eight. After seven successful seasons the show that has brought high quality dance and choreography to our living rooms is still going strong and giving opportunities to young dancers of every style. The Season Seven Tour, also featuring Season Six winner Russell and a group of the All Stars, just finished visiting 40 cities across the US. Dance Informa caught up with the excited, yet exhausted bunch of dancers in Los Angeles.

All the dancers seemed to be having a blast on the tour. “It’s been incredible, just an adrenaline rush”, said Billy. “It’s a dream come true”, shared Robert. “When people say this is the best experience of their life, I can agree with them completely. I don’t think I’ll ever have something like this as a dancer ever again. When you get out there and there are thousands of people screaming for you and for dance, its mind boggling”.

The All Stars enjoyed being back on tour once again after several years break. “It’s been exciting to be able to be back and perform in front of everybody again” said Courtney.  “We all leave thinking it’s a once in a life time experience, so to be back is just crazy”.  All Star Kathryn concurred, “it’s been incredible. You tap into your deepest performance every night. We know the numbers so it’s not like we’re going to forget what we’re doing, it’s not stressful. We’re learning how to tap into the emotion of every dance and learning how to dig deeper and just really enjoy being on stage”, she explained.

The series stresses that the competition is about learning and the dancers’ growth. B-Boy Jose agrees, sharing, “before I went on I was just a B-Boy, but by going through the experience and the tour my whole style of dance has changed. I’ve learnt so much from all the other dancers and it’s opened my mind to another world”.  Ashley and Billy spoke about their growth also. “I feel like we’ve all grown up in a way and found who we were. It’s opened up my eyes”, said Ashley.  “And it’s opened up our personalities”, added Billy. “I feel like I’m more comfortable talking about myself now. Usually I’d push it aside and talk about my dance, hiding behind the dance, but now I’m not afraid to talk about myself”.

One dancer, who seemed to relish talking with the media was Kathryn, who shared that she will be moving into motivational speaking next, travelling across the country with The Revolve Tour. “It’s January through April, all over the country and for girls 6th grade through 12th grade”, she explained. “I’ll go on Fridays and perform and then on Saturdays I’ll have my own message that I’m sharing. I’m really excited. My biggest fear is public speaking, so it’s really huge for me”, expressed Kathryn.

But what has Season Six winner Russell been doing since we last saw him? “I’ve been putting together my own projects, going around teaching, trying to develop a name for myself and taking advantage of the opportunities that came to me for being recognized”, he shared.

So what will popular Season Seven winner, Lauren, do with her new found fame in the next year? “I have a couple teaching gigs here and there and then I have some charity events in Arizona before I move out to LA in January”, Lauren said. “Then I’ll start auditioning and trying to take over the industry”, she laughed.  And who would she like to audition for?  “I want to be in a Cirque de Soleil show”, she revealed.

Runner-up Kent, who is just as loveable and excitable in real life as on the show, is already making career moves. “I did a show on the Disney Channel, Shake It Up, and I got to act a little bit. It’s premiering on Dec 5th”, he said. So is Kent interested in acting as well as dancing? “After this I’m going to go more onto the acting route and audition for things on TV”, he shared, “and I’ll always keep dancing. I feel like this show has really helped me do things that I never thought were possible. I’m going to use that to catapult me into different things and try new things. I’m so ready and eager”.

Both AdeChike and Robert also expressed an interest in acting. “I’d love to act as well as dance and have a healthy balance with a successful career in both fields”, said AdeChike. “I want to start acting big time and also singing”, shared Robert.  “I would love to do something like Glee. It has a little bit of everything – acting, singing and dancing. I’d love to do a TV series or even a movie”.

Billy, on the other hand, wants to concentrate on choreography. “I’m doing a lot more with my dance company – Lunge Dance Creative,” he divulged.  “We are doing some shows out here in LA. The tour’s really inspired me to create, and I’m really excited for it. There may be a new project with Mia in the future too, fingers crossed”. But if he could dance for any company, who would it be? “Cedar Lake Contemporary Ballet”, he said without any hesitation.

All Star Allison also has big plans. “This Spring my collection of dancewear is coming out. It’s called Live by Allison”, she said. “It’s very exciting. I’ve always wanted to have a clothing line so now it’s actually happening and it’s definitely from the show. I had the exposure to get hooked up and make my dreams happen”.

And winner Lauren’s dreams came true, but did she ever expect such success?  “I just auditioned on a fluke” she laughed. “I would have never have thought that I’d get as far as I got, I didn’t even think I was going to make the show”. So how did she feel when she won?  “That was nuts. It still doesn’t really sink in. It feels like a dream come true. I’m just so honored. It’s humbling and uplifting at the same time”.

So You Think You Can Dance returns in Summer 2011 with 20 new dancers to grace our screens.
The last auditions will be held in Salt Lake City, Los Angeles and Charlotte, NC in February and March.
Check out the AUDITIONS tabs above for all the details.