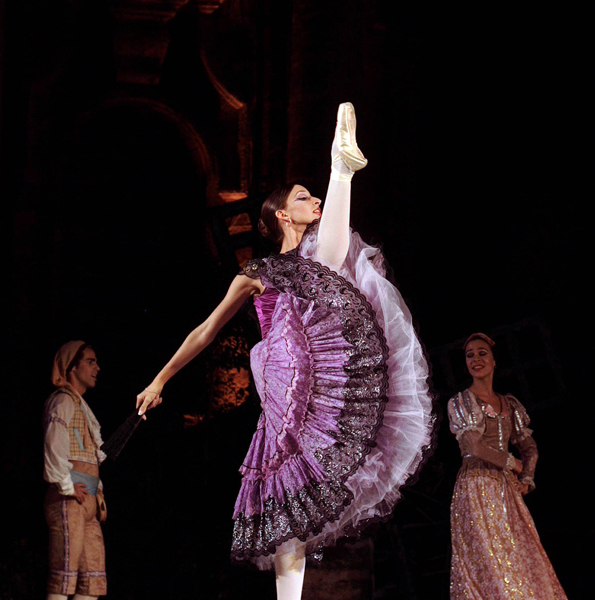 Originally trained at the provincial ballet school “Alejo Carpentier” in Havana, Arencibia won numerous awards in Cuba before joining the the national company in 1999. In 2002, Arencibia was awarded the “Villanueva” Critic’s Prize, granted by the Performing Artists Association of the Cuban Union of Artists and Writers (UNEAC) for her performance in the Agon pas de deux by Balanchine.

Though Arencibia has been much praised for her ethereal softness and sensitivity, the role of Kitri, she insists, requires something else entirely. “The most important thing is to give the role the ‘Spanish touch’ that it deserves,” Arencibia informs me. “That means vivacity, expressivity and happiness. Oh yes, and lightness!”

Choreographed by company founder and ballet icon Alicia Alonso, and based on the original by Marius Petipa, the Cuban version of Don Quixote reclaims the spotlight for the title character, who is often minimised in other productions. “This version of Don Quixote definitely treats the Quixote with more seriousness and more relevance,” says Arencibia. “The most important differences concern the relationship between Don Quixote and Kitri, and the character of Dulcinea from the novel. The dream-like nature of their relationship is quite important in this version.”

“Alicia Alonso has put her own indelible mark on ballet in Cuba and has a firm belief in the development of a very strong technique,” says Arencibia. “I have always tried to follow Alicia’s example myself. In terms of the interpretation of characters and detail, Alicia’s memory is quite important, and this is fundamental for any dancer to be able to do a good job.”

Thanks both to Alonso and Cuba’s free system of public education and training, ballet has been an accessible and important part of Cuba’s rich cultural life for decades. Like many children in Cuba, Arencibia was exposed to ballet regularly as a young child. “Since I was very little, I watched a lot of ballet on Cuban television, and that excited me. Equally importantly, my family used to take me to the theatre quite often, and I developed a curiosity for ballet and started dancing.”

Arencibia’s idol, Alicia Alonso, is by far the most important ballet icon in the history of Cuba.  Extraordinarily, despite being 89 years old and partially blind since the age of nineteen, Alonso continues to personally direct the Cuban Ballet. “Although I’ve only had interactions with Alicia in a professional way, as a person I’ve been inspired by her perseverance,” says Arencibia.

When asked of her favourite roles to dance, Arencibia expresses a love for the classics. “There are so many – Giselle, Odile/Odette in Swan Lake, Princess Aurora in Sleeping Beauty and many, many others. They’re my favourites because they are the roles that all principal dancers aspire to dance, some of which I have already preformed.”

Returning to Havana immediately after her time in Australia, Arencibia will perform at the International Festival from the 28th of  October to the 7th of November, taking full advantage of every opportunity – something which she encourages all dancers to do.