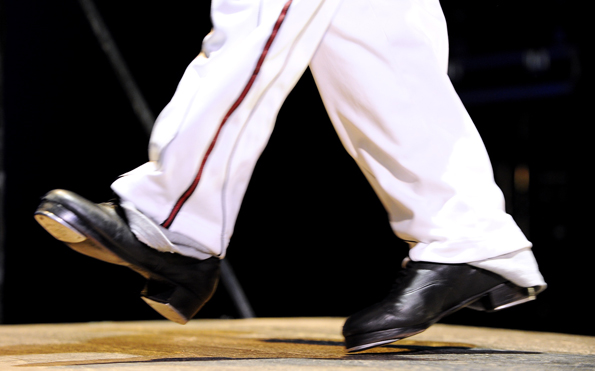 Savion Glover does not lie. He promised bare  sounds, and that is exactly what he delivered at the 2010 Spring Dance Festival at the Sydney Opera House.

Bare Soundz is 90 minutes of pure tap: no narrative, no props, no fancy sets. On stage there are simply three wooden platforms amplifying the beats of Glover, Maurice Chestnut and Marshall Davis Jnr. Reminiscent of a traditional jazz trio (bass, drum and keys), Chestnut and Davis start Bare Soundz by creating a consistent strong backbeat with their heel and toe taps, simply tapping with one foot to provide the strong bass. Glover takes centre stage, and with clearly articulated footwork he delivers a smooth melody, punctuated at times with strong staccato beats. When it comes to his performance it is evident that Glover’s rhythms permeate from within. At times he was clearly focused and performing in his zone, with eyes closed and a smile on his face that expressed sheer joy in the music he was creating with his feet. He captivated the audience to not only see the visual element of dance but to intently listen to the dance and be transported by the musicality of his rhythms.

Savion Glover’s rhythmical journey started when he was a young musician playing the drums. Growing up in a musically gifted family, Glover applied his skills to tap dancing. He is the talent behind the animated tap dancing penguin Mumble, in the film Happy Feet and is widely recognised today as the world’s greatest tap dancer. Privileged to have learnt his craft from revered tap legends such as Lon Chaney, Jimmy Slide, Chuck Green, Honi Coles, Bunny Briggs and Gregory Hines, Glover carries on today the legacy of these pioneering hoofers through his own works that push the boundaries of tap dance.

What makes Glover’s show extraordinary is that it is never performed the exact same way twice. Glover calls this, Improvography; a combination of choreography and improvisation. When all three dancers are tapping in unison the timing is impeccable, as if you are hearing one tap dancer. When each dancer in turn takes the lead, they show their own unique style through improvisation. Chestnut has a distinct groove where he performs with strength and conviction in his solo, while Davis is reminiscent of the legendary hoofers tapping with speed and control, letting his feet do the talking. Glover is a brilliant technician who wowed the audience with his power and fast footwork, delivering clear intricate beats that are performed effortlessly. Wearing traditional Capezio black tap boots, and not his usual trademark green, he made sounds using every part of his boot from the inner and outer edge, to the soles, heels and toes. His boots are his musical instrument and there was not one part of his boot that he did not use to create a soulful tune.

A highlight for me was the jam session, when each dancer in succession took 16 counts to improvise and outdo the performance of the dancer before them. Trying to impress, Glover, Chestnut and Davis pulled out all stops with complex wings, riffs, shuffles, toe stands, slides and turns while never missing a beat. It brought out their competitive side as they stole each other’s steps and did it one better than the last dancer, which had the audience amazed.

Feeling inspired by the show, I had the opportunity of honing my own tap skills at an exclusive Tap Master Class with Glover, and this is when it became really interesting!

Glover didn’t position himself at the front of the class and lead a traditional warm up, nor did he teach a combination as we had expected. He opened the class by explaining that he no longer taught ‘steps’ as we all have a vocabulary of steps. He challenged our thinking and approach to tap dance, which became the premise of the 2 hour workshop. Glover walked around the class weaving in and around the dancers as he posed philosophical questions in relation to tap. He explored the theory, technique and musicality of tap dance, discussing timing, accents and the structure of steps, all of which are important technique tools for improvisation. His class was a journey beyond the realm of a combination. It was unlike any tap class I‘d ever been to, and I was left to consider whether we approach tap as musicians, dancers or both. What I enjoyed most was when Glover demonstrated musical concepts such as half time, single time and double time, and taught us how to create our own combination using the structure of “3 and a break”.

Everything I learnt from the class became more apparent when seeing Bare Soundz for the second time. It is extremely rare for me to see a show twice in one week, but I could not help going back for more to experience the brilliance of Savion Glover – 90 minutes of nothing but tap dancing and wonderful rhythmic sounds at its best.

A true creative genius, Savion Glover is an artist dedicated to his craft. He not only delivered an incredible performance to Sydney audiences, but has also embraced the responsibility of carrying forward his art form, sharing the musicality of tap dance to the next generation of dancers and reminding me of what the Bare Soundz of tap dance is all about….creating music with your feet!