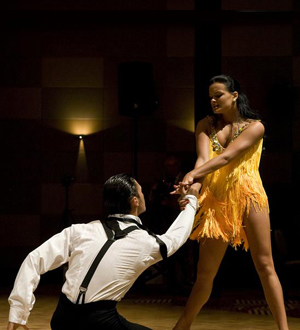 Zouk is the latest Latin dance explosion down under; whatever it is.

I confess; when I first saw the email headed ‘Zouk Championships’ I assumed it was spam. I mean, really – Zouk … what is that? Some kind of hockey?

Well no, dance fans, it ain’t. Zouk, it transpires, is a highly rhythmic and exciting dance form with its roots in the French Caribbean and its soul in Brazil; and it’s emerging now in Australia as one of the hottest new Latin flavours on the dancefloor.

However, before we get carried away, it’s worth noting that the jury is still out on what exactly Zouk is. Since its inception amongst the Creole speaking people of Guadeloupe and Martinique it has become popular not only in Brazil but in the Lusophone nations of Africa and in France and Quebec. Once it took off in Rio it quickly merged with Lambada; and here’s where much of the contention lies.

Gaspar Ribeiro, a Rio born Sydney based veteran of the dance and the organising force behind the Australian Zouk Championships, explains it thus. ”It originates from our world famous Brazilian dance Lambada and it’s important we refer to it formally as Zouk-Lambada or Brazilian Zouk, so as to not confuse it with Zouk from the French Caribbean.”

Ian Corbett from Smooth Latin Groove in Brisbane is a little more circumspect. “There are all sorts of arguments,” he declares diplomatically. “What some people call Zouk others say is just a variation on Lambada and so on; so it’s really still evolving. In a way though, that’s quite exciting.”

One thing, however, is uncontested. The word zouk means party or festival and as such it is a vibrant dance. “Brazilian Zouk is hypnotic,” Ribeiro enthuses. “It’s also very sensual … Zouk was definitely constructed for the woman.”

However, this does not mean that it’s ‘dirty’ dancing. Ian Corbett points out that although it is a free flowing “back and forward’ partner dance it has elements of contemporary. “Zouk is more about body movement,” he expands. “It keeps flowing; it’s more about circles and lines than just hip movement … It’s also a more grounded dance. People tend to enjoy it more in flat shoes than heels.”

In Zouk the man learns to lead with his whole body, incorporating head, shoulders and hips. For the woman it’s dips, fluid movements and sensual head tossing. This trend has emerged as the tempo has slowed. Brazilian Zouk, Love Zouk and Soul Zouk are all slower than the often frantic Lambada.

“What really defines Brazilian Zouk however, is the emotional connection between the couples,” says Gaspar Ribeiro. “When you connect with your partner, the dance becomes even more hypnotic.”

While the debate about what makes Zouk, Zouk continues, on the floor it’s burning hot. “Zouk is now the second most popular dance in the Australian Latin dance scene, second only to Salsa,” Ribeiro tells me.

Ian Corbett confirms, “It has had a bit of an explosion because it’s new and different and people are always looking for that. It’s a relatively simple dance too.”

Adelaide based dance student Tom Kenworthy agrees. “Zouk is pretty easy compared to some of the other styles I’m trying to learn,” he says. “The rhythm is pretty basic and I don’t feel like I’m locked into a certain way of doing it.”

Picking up on this, Ribeiro explains, “One of the most exciting things about Brazilian Zouk is the scope that exists for creativity in styling, to express feeling and personality and to always make the dance look different.”

One of the challenges facing Zouk devotees is finding appropriate music. Indeed, much of the current Zouk soundtrack is being generated by DJs remixing R&B and Hip-Hop.

“What’s happened,” Ian Corbett notes, “is that the dance has gone overseas and come back, and so it has absorbed all these other influences. We’re hearing that in the music now.”

Meanwhile, Gaspar Ribeiro is continuing to plot the dance’s ascendency in Australia. With a massive event, (Planet Zouk), slated to coincide with next June’s Australian Zouk Championships in Sydney, he is busy spreading the fever. “When I first arrived in Australia about four years ago,” he reveals, “I decided that I wanted to make this dance the most popular dance in the country.”

Over in Adelaide, Zouk novice Tom Kenworthy declares that although he is not yet dreaming of a star spin at next year’s championships, he and his partner are starting to see what all the fuss is about. “I reckon it’s probably the most fun of all the Latin dances; not that I’m an expert but I know what I like.”

And now that I know it’s not some bizarre hockey spin-off, I’m beginning to like the sound of Zouk too. (Now, where are my dance shoes?)