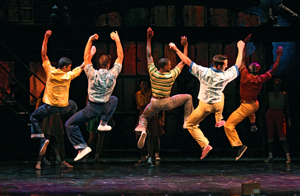 Amidst the plethora of tourists, bright lights, shows, and bustle of Broadway in New York, The Shubert Theater on 44th Street played host to Memphis , winner of the 2010 Tony Award for best musical. With summer heat rising from the pavement outside, the cool interior of the theatre was a welcome relief for the excited audience who filled every seat in the house to see the “biggest hit on Broadway”.  With advertising slogans such as “The story is American, the thrill is universal”, my expectations were high and I was not disappointed.

As soon as the curtain opened, the dancers burst on stage and the musical began with sharp, fierce and lively dancing from the chorus.  The women were sexy, the men were sultry, and their voices made my hair stand on end.  The first scene, set in an African-American rock ‘n roll underground bar in Memphis ,Tennessee, during the 1950’s,  made me long for that era of music and dance.

Memphis tells the story of Huey (Chad Kimball), a white man who cannot hold down a job but loves soul music, and Felicia (Montego Glover) a young African-American singer. Felicia is trying to make a name for herself in racist Tennessee where the “black music” she makes is banned everywhere except underground clubs, such as the one her brother Delray owns.

Through a combination of timing, charm, and skill, Huey secures a gig as a radio DJ, gets Felicia played on the radio, becomes the most popular radio presenter in Tennessee, and wins over Felicia.  Unfortunately, in 1950’s Tennessee, inter-racial relationships were frowned upon and Felicia is badly beaten.  With Huey reluctant to leave Memphis, Felicia travels alone to the more liberal New York to pursue her singing career and escape the prejudice of Tennessee.  Sadly there is no ‘happy ever after’ for Huey and Felicia, which is possibly the only disappointment of an otherwise brilliant production. The ending was slightly anticlimactic and the absence of a fairy tale ending was a bit of a letdown.

Kimball was born for the role of Huey and was nothing short of brilliant.  He was endearing as the potentially annoying Huey, and portrayed him as a cool and nuanced character.  Kimball’s presence on the stage was mesmerising.  Glover also brought the house down with her portrayal of Felicia.  Her voice and commanding performance elicited rapturous applause from the audience.  The two performers carried the show with ease and confidence, with a sense of genuineness and without any forced showiness that often pervades Broadway musicals.

Memphis had it all: laughs, surprises, outstanding dancing, fantastic sets, stunning voices, entertaining songs, interesting choreography and a message that stays with you long after the curtain has come down.  It showed that music has the ability to inspire change in people and it exposed the ugly impact of prejudice and racism.  Memphis put a spring in my step and a smile on my face, and after the show I could be heard uttering the words “musical of the year!”