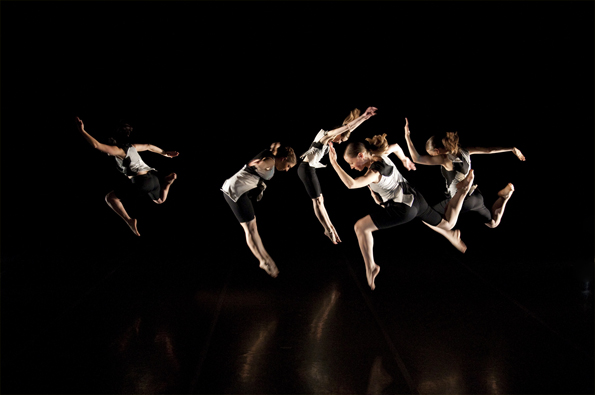 Seeing San Francisco based Double Vision perform in New York at the Merce Cunningham studios in the West Village was heaven for a dance lover like myself.  This was the ten-person company’s first appearance in front of a fickle New York crowd, but Double Vision impressed with its performance of the modern dance piece Hysteresis.  The production, an experimental work choreographed by Co-Artistic Director Pauline Jennings, premiered in California in April and was described as “70 minutes of non-stop, innovative dance, sound, lights, and costumes informed by a residency at the Museumsquartier in Vienna, Austria”.

The piece drew upon the theme of alienation, both one’s own feeling of being alien and that which is alien to oneself.  With geometric lighting and costumes, there was a sense of something unfamiliar, as the natural world is full of less structured shapes, however once the dancers began swirling around the performance space, a warmth and familiarity returned.  The industrial and percussive soundscape and sparse use of music kept the focus on the dancing and drew the audience in, as though they were a part of the performance, rather than separate from it.  Moments of silence and stillness came suddenly and with a large impact as they forced the audience to pause and think about what was unfolding before them Without a set narrative, we were free to interpret the show in any way we saw fit, or we could simply enjoy the performance as a pure dance piece.

The five female dancers in the piece performed Jennings’ choreography solidly and with great breadth of movement.  The movements were at once both angular and lyrical, with a continuation of the geometric theme through the use of elbows and knees to carve shapes in the air.  The dancers were technically proficient, and performed mostly individually, even when sharing the stage.  Occasionally the dancers would work in unison, with great effect, but mostly the space was a flurry of bodies and shapes moving independently – alienated from each other.

Double Vision is an excellent contemporary dance company that is not afraid to experiment and fuse sound, light, video and dance.  The performers are strong, capable and a delight to watch.  This is how modern dance should be: beautiful and edgy all at once.