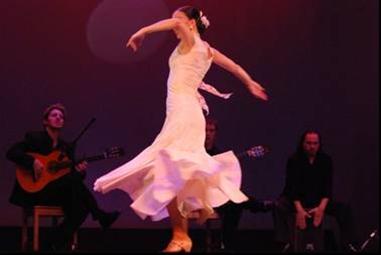 Flamenco star Paloma Gomez brings the flame down under.

Flamenco is a mongrel; a pulsing, vibrant, red blooded child of many sires. No wonder it’s so healthy.

Most agree that flamenco coalesced out of Gypsy, Moorish, Sephardic and Byzantine clouds sometime in the fifteenth century, finding its feet in the southern Spanish region of Andalusia. By the time the word flamenco first appeared in the eighteenth century the dance had already taken hold, with its robust peasant heartbeat and intricate Middle Eastern stylings, making it the signature dance of cities like Sevilla and Cordoba.

Today, flamenco is synonymous with Spain. However, it is by no means confined to the sunny shores of the Iberian Peninsula. Indeed, in Australia the dance thrives, a fact recognised by the Spanish government when they sent flamenco goddess Paloma Gomez down under to perform and teach.

“It’s totally amazing for me to see people so far from Spain who have the feeling for flamenco,” Gomez declares. “It’s beautiful. When I travel I see that through the flamenco you can connect with people around the world because they feel the same when they are dancing.”

For Gomez flamenco is truly in the blood; both her parents were dancers and she herself began to dance at four. Years later she became a principal dancer with both the Ballet Nacional de Espana and Nuevo Ballet Espanol. These days she runs her own Madrid based company.

The first stop on her Australian tour was Adelaide, where she teamed up with Studio Flamenco, who themselves are recognised as one of Australia’s foremost exponents of the form. For co-founder Emma Fernée working with Paloma Gomez represents a high point in her own flamenco odyssey.

Having done classical ballet as a child, Fernée came to flamenco by accident. “I saw some in a film and I thought, ‘that looks like something interesting, maybe I’ll just give that a go’.”

From there, she found herself drawn in. “There was something about me in flamenco that I wanted to express. Maybe I’m not really sure what that is but it certainly gave me the chance to express something about myself … There’s a freedom in flamenco to be quite individual. You’re not compelled to always put on a smile and project a particular image.”

Paloma Gomez certainly wouldn’t disagree. “It’s a way you can express every emotion you have inside,” she says. “You cannot dance flamenco if you don’t feel something very strong.”

“It’s more than just a dance form,” Fernée is quick to add. “It’s the music, it’s the songs; everything about it has a very deep history.”

As someone who discovered it from the outside Fernée is keenly aware of both the traditions and the emerging realities of flamenco in the twenty first century. “Outside of Spain it’s become a really popular art form and it’s kinda going through a bit of a transformation. It’s definitely got its origins in Andalusia but it’s becoming international.”

Flamenco was born of fusion so it is perhaps no surprise that it is readily taking on new influences. “The important thing here in Australia is that we don’t try to be Spanish,” Fernée contends. “I think you have to take the art form and use it in a way that has meaning for you and for the culture that you live in.”

As Paloma Gomez says, “You first have to know the roots, but after that you can use your own personality. So of course people around the world bring something new and this keeps the flamenco alive.”

And its popularity is growing despite the fact that it’s not the easiest dance to learn. Even though its birthplace was amongst the peasantry and for centuries it was performed without musical accompaniment (only handclaps) it has technical aspects that lift it above the usual simplicity of folk dances.

“The footwork is quite technical and there are very particular ways that you move the body,” Emma Fernée explains. “But having said that, I teach children and adult beginners who have no dance background, and by and large they get it and enjoy it … But the more you hone your technique the more freedom you have to express.”

Here of course is the point. Expression. Passion. Flamenco is anything but austere. It burns. Paloma Gomez laughs knowingly at this characterisation. “At the end it is all about human emotion; and we can all feel that.”

As if the point needs illustrating, she continues. “When I am teaching outside of Spain I like to try to speak English for the students so they can understand but a lot of times they tell me, ‘no, Paloma, speak Spanish’. They say this because the flamenco is a universal language.”

From its melting pot origins in ‘reconquista’ Spain to its globally popular standing five centuries later, flamenco continues to clap and strum out the beat of many hearts, its earthy power undigitised.