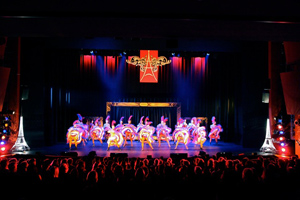 This razzle-dazzle cabaret could have been called Viva Las Vegas.

Imagine Esther Williams without the water; big chorus numbers with amazing costumes where pretty girls and beautiful boys do variety show routines with high energy excess. Ooh La La is like a buxom babe bursting out of a birthday cake. It’s a music hall-meets-Hollywood explosion of high kicking, family friendly, colourful cruise ship frivolity. And it’s not only French.

Yes, there are can-can numbers, Edith Piaf homages and illuminated Eiffel Towers but really this is a straightforward Anglo sideshow. (Not that there’s anything wrong with that).

The 31 strong ensemble cast are clearly talented creatures and they present the show’s dance numbers with ease and charisma. Whilst Rhys Bobridge elicited the most screams of delight from the audience, Ooh La La is definitely a team piece. The sheer energy and commitment of the dancers is something to behold. And boy, do they rattle through the costume changes!

Ooh La La certainly won’t frighten granny and being a cabaret, this show isn’t just about the dancing. Live vocals, the occasional burst of circus trickery and plenty of clap-along moments form much of the evening’s backbone. From the whooping country hoop-la of Queen of Hearts to the comedy of Men In Tights, the idea is to keep things pacy and upbeat and the effect is rather like a great box of chocolates. Everyone’s got their favourites.