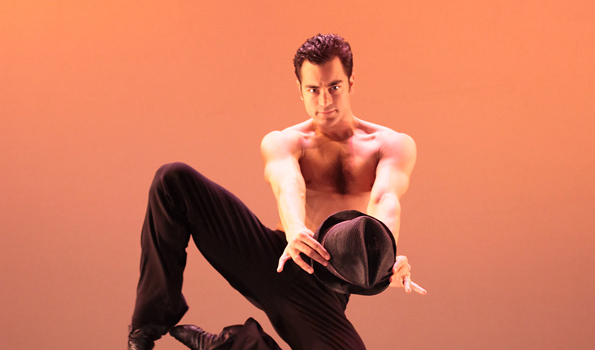 Rasta Thomas, the founder and Artistic Director of Bad Boys of Dance is definitely bad, in the good sense of the word. An award winning performer, Rasta has been in several TV documentaries, performed at the Academy Awards, appeared in the feature film One Last Dance, starred on Broadway in Movin’ Out and danced at the White House for the President of the United States.

An accomplished ballet dancer and all round performer Rasta made dance competition history as a teenager before dancing with Le Jeune Ballet de France, Hartford Ballet, the Kirov Ballet and Dance Theatre of Harlem. With a number of guest performances with some of the world’s best dance companies including American Ballet Theatre, National Ballet of China, Joffrey Ballet and Complexions Contemporary Ballet, Rasta brings a wealth of experience to his role as Artistic Director of Bad Boys of Dance.

In 2008 Rasta created Rasta Thomas’ Rock The Ballet with his wife Adrienne Canterna. As Bad Boys of Dance embark on a European tour of Rock The Ballet, after three successful weeks at the Joyce Theatre, New York, Rasta spoke with Dance Informa.

Funnily enough, Rasta started dancing under punishment from his father. “My father put me in ballet for misbehaving in martial arts class”, he said. Little did he know just how talented his son was, as Rasta took to dance like a duck to water. As such a successful dancer, I asked Rasta about his career highlights so far, as at only 28, he has many years ahead of him. “I have too many!” he exclaimed, listing off a string of achievements. “Receiving my black belt in Taekwondo, winning gold medals at IBC Varna and IBC Jackson, performing on the Academy Awards, dancing the great male ballet roles, guesting with the top dance companies, and working with dance giants like Mikhail Baryshnikov, Savion Glover, Carlos Acosta and Tetsuya Kumakawa are all highlights”, he shared. He also spoke on meeting Michael Jackson and working with Patrick Swayze. On the personal front Rasta noted “getting married and becoming a dad to an amazing little girl” as his greatest achievement. “And of course, starting Bad Boys and Pretty Girls of Dance”, he threw in.

Rasta and his wife Adrienne Canterna, a talented dancer herself, make a dynamic team, creating Rock The Ballet together. Rasta spoke of their special union and working relationship. “I met my wife in dance class when I was ten. We have been soul-mates ever since. I genuinely feel that it is a miracle that we get to do what we love to do and share it with the world one show at a time. We bring out the best in each other every day, on and off stage. We compliment each other’s artistic weaknesses extremely well”, he shared.

With Rock The Ballet enjoying acclaim across the globe, I asked Rasta about the show. “RTB is a dance show that is athletic, sexy, entertaining and fun”, he expressed. “It is a high energy dance show that was created for dance lovers and first time theatre goers. Our secret is simple – great dancing to great music”.

And the audiences have agreed. “Our audiences leave with smiles on their faces wanting to go out dancing! It is a magical thing when everything clicks, when all the hard work pays off. You are dancing your heart out to a packed theatre, and then at the end, you are appreciated. Nothing is sweeter”, he said.

Rock The Ballet is an attempt to revitalize classical ballet and bring new audiences to the theatre. “The stereotype that ballet is boring is very much alive and kicking. My mission is to change that with the Bad Boys and Pretty Girls of Dance”, Rasta explained. “Most people enjoy dancing themselves, but in my opinion ballet is not the type of dancing they like doing or even find somewhat enjoyable. The steps are appreciated only by dance fans and that doesn’t have to be the case. Rock the Ballet is the perfect example that a dance show can showcase exquisite technique and artistry but also be tons of fun!”

And who wouldn’t expect that a show called Rock The Ballet by a company of ‘bad’ boys wouldn’t be fun and entertaining? But what’s so ‘bad’ about these dancers in the first place? Rasta explained that it’s not that the dancers are badly behaved, but that they are so talented and exciting that they are ‘bad’ in the ‘cool’ sense of the word. “When growing up the word ‘bad’ was slang for good. Being a huge Michael Jackson fan only made it easier when I had to name the company”, he enlightened me. And Rasta’s dancers are good, to say the least. “The Bad Boys are hybrid dancers of the future that can mix many different styles of dance. This creates a vocabulary that is more accessible to people. We are the Bad Boys because we are breaking from the traditional dance path most would have followed. We are leaders and trend setters”, Rasta explained.

As the company is currently auditioning for new Bad Boys to join their team, I asked Rasta about his requirements for new recruits. “I look for versatility in dance vocabulary, personality, showmanship, technique and a deep passion and love for the art form. Also, a strong desire to improve and want more is important”, he made clear.

Teaching dance workshops across the US, to Bad Boys hopefuls, Rasta shared some advice for young dancers. “You get out what you put in. Dance is a way of life. Try and stick to the choreography, but if you get stuck, just improvise your way out”, he said. “Dance is very hard and the training is painful. You have to condition your body and your mind to a point that is extreme. If you’re not sweating, you’re not growing. If you’re not hurting, you’re not challenging yourself hard enough. In the end, dance is hard work any way you cut it. So in the end, give in and just love it every second you can”. Noting discipline as one of his major keys to success Rasta credited it to his martial arts training. “Martial arts gave me the discipline to set a goal and achieve it. These are two vital aspects to being a dance maker”, he revealed.

So what keeps Rasta creating at the pinnacle of his success? “What keeps me dancing are all the possibilities still to come that I have swirling in my head. How I can make audiences and people feel alive and happy? How can I raise the bar and keep people coming back for more?” he expressed. “My dancers, my wife, music and life in general inspire me to produce a better show every day I’m alive”. And Rasta is sure to achieve his goals. “I want Bad Boys to be the hottest and ‘baddest’ dance company the world has ever seen”, he exclaimed. “My job is to make that happen!”

The Bad Boys of Dance are currently performing a 50 show, 23 city, European tour, but will be visiting Australia this season with the dates yet to be announced.
For further information visit www.rocktheballet.com.au/main.html and www.badboysofdance.com