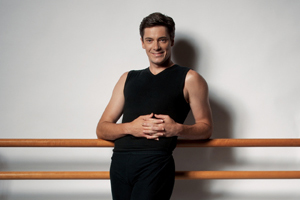 After 18 distinguished years,
Australia’s prince of ballet moves on…

Damien Welch, Australia’s prince of ballet, has announced that he will retire as a Principal Artist of The Australian Ballet. Audience members along with members of the company were able to express their appreciation of his wonderful contribution to ballet when Damien took a farewell bow on Monday November 30th at the final performance of The Australian Ballet’s Concord season.

This announcement does not mean we have seen the last of Damien on stage. Artistic Director David McAllister announced that Damien will continue to have an ongoing relationship with The Australian Ballet, returning in 2010 as a guest artist in a number of performances throughout the year. David reflects, “It has been such a joy to watch Damien join the company as a talented young dancer and develop into one of the most gifted artists of his generation.” “He has lit up stages across the world for the last 18 years and created roles with some of the world’s most respected choreographers,” he said. “Damien will continue to grace our stages in 2010 as he simultaneously develops his interests in creating and restaging works on the other side of the curtain.”

Damien is an extraordinary talent whose expressive and powerful style, along with his easygoing manner, have made him a critically acclaimed ballet star and a respected member of the company. The son of Australian dance legends Marilyn Jones and Garth Welch, and younger brother of star choreographer Stanton Welch, Damien had big shoes to fill. He has done so with the grace required of the ballet world’s elite. He has had works created on him by some of the globe’s leading choreographers Twyla Tharp, Jiři Kylián and Stanton Welch, partnered the world’s best ballerinas and performed many classical and contemporary works on the Australian and international stage.

In announcing this next step Damien says, “I am excited by the opportunities the future offers and am looking forward to a rewarding career behind the scenes.” Reflecting on his career Damien says, “The Australian Ballet has been my family and my life for over 15 years so there is no doubt I will miss it.”

2009 has been an exciting one for Damien, who made his choreographic debut in May in Bodytorque 2.2 with the work Chemical Trigger. In July he and his wife, fellow Principal Artist Kirsty Martin, welcomed their second child into the world, Matilda. They also have a son, Oscar, who is four. Damien has enjoyed a stellar career on stage and the company looks forward to an ongoing association with him.