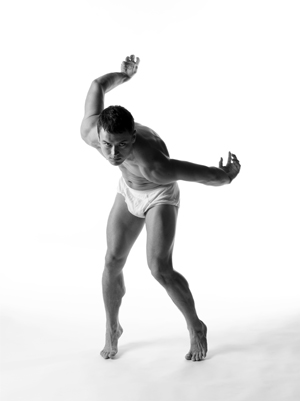 Spring blossomed at the Sydney Opera House with a four week celebration of dance. Spring Dance showcased free outdoor dance films under the stars, from the graceful Ginger Rogers and Fred Astaire, to the 1980’s dance hit FAME. There was the opportunity to get up-close and hear directly from choreographers and artistic directors of some of Australia’s leading dance companies, and witness dynamic contemporary dance performances featuring five cutting edge contemporary dance works by world class choreographers and artists.

New for Australia’s renowned choreographer Meryl Tankard, The Oracle takes on the conflicting forces of nature and man in a demanding solo performed by 2008 Helpmann Award winner, Paul White. Vaslav Nijinksy, talented dancer of the Ballets Russes, originally choreographed this futuristic work which premiered in 1913. He exceeded the limitations of ballet drawing upon the radically modern score of Igor Stravinsky’s The Rite of Spring. He shocked audiences with his violent dance steps which created uproar at the Theatre des Champs-Élysées in Paris, where it first premiered, making it one of the most controversial dance works of its time.

In this newly created work by Meryl Tankard, Paul White’s athleticism shines as he captivates the audience with his strength, skill and agility, executing the most intricate and fluid of movements. The Oracle begins with a film projection of ultra modern kaleidoscopic images of Paul White, set to the score Magnificant by Joao Rodrigues Esteves, which is both intriguing and mesmerising. White’s strong punctured movements are propelled by the harmonically adventurous rhythms of Stravinsky’s score in two parts; ‘A Kiss of the Earth’ and ‘The Exalted Sacrifice’. Showcasing his muscular strength, Paul White uses props including a velvet cape which whirls and flows with his cartwheels, creating a beautiful visual flare that complements his strong repetitive movements.

Almost 100 years after its premiere in Paris, Meryl Tankard’s The Oracle takes you on a thought provoking journey and delivers an enthralling work that pushes the boundaries of modern dance today.