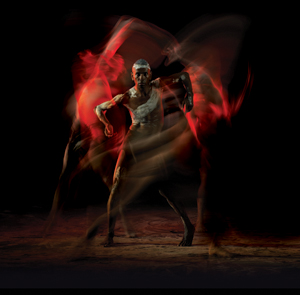 Happy Birthday Bangara! It is hard to believe that the company has now been performing for twenty years. At twenty, it is appropriate to pause, reflect and celebrate, and Fire is a ravishing, spectacular retrospective analysis of the company’s work.

The word ‘Bangarra’ means ‘to make fire’. The company was founded in 1989 by Carole Johnson, the first director of NAISDA, Australia’s Indigenous dance school. Stephen Page, a former dancer with Sydney Dance Company became Bangarra’s Artistic Director in 1991, forging a creative core development team with performer and cultural advisor Djakapurra Munyarryun and Page’s two brothers. Bangarra has evolved into one of the leading contemporary companies in the world, blending the traditional Aboriginal and Torres Strait Islander styles with cutting edge contemporary dance to become revered internationally. This distinctive style tells the story of Aboriginal and Torres Strait Islander people everywhere in a modern day Dreaming, fusing the sacred myths and traditions of the past with the present.

Choreographers for Fire include Page and Bangarra stalwarts Frances Rings and Bernadette Walong- Sene. It combines some dramatic traditional dances with sequences from several of the company’s major works (eg Ochres, Bush and Fish) in a glorious celebration of land, country and Aboriginal life.

The work opens strongly with a solitary dancer emerging, descending upside down from a huge woven basket set hanging centre stage. This leads to some traditional dances that move into a dream-like ‘Brolga’ section from the 2001 Corroboree. It is an extraordinary piece with similarities in some ways to Matthew Bourne’s Swan Lake. The female dancers wear Jennifer Irwin’s glorious floaty white dresses and dramatic red and black makeup. The dancers wheel, cavort, hover and attack in feeding groups. The Graeme Murphy influence is also strongly visible in the choreography. This is followed by sections from the 1995 Ochres with the dancers abstractly representing the land. In one section the women are in yellow and are like darting fish. A very strong, powerful sequence follows, somewhat Lloyd Newson in style, from works where the company has looked at social issues such as deaths in custody, drugs and petrol sniffing. The ‘Victims’ section by the men is bleak, harrowing and despairing. This was complemented by another terrific section called ‘Veins’, by the women, where one of them is under the influence of drugs. She is itchy, scratchy, urgently restless, haunted by ghosts and driven to suicide.

Act Two includes a spectacular bungee jumping elastic sequence. There are also wonderful insect like sand creatures in brown costumes with ochre lines, alien-like red and black eye makeup and long poles for hands. There is another section where the dancers are like hooded underwater creatures. The texture of the costumes and the makeup are amazing.

There are some wonderful passionate duets as well as a quite sculptural water-sliding sequence. I enjoyed the vivid traditional Torres Strait dances. The men adorn feathered head dresses and carry bows and arrows as if to attack the audience and the women dance with pretty fans .The cast obviously have great fun in this section, before it all ends exuberantly with a short, explosive contemporary style show-off finale.

I adored Jennifer Irwin’s costumes, the use of film, and the photos of past productions and former company members. I marveled at the various textured and coloured backgrounds by Peter England, Rochelle Oshlack and collaborators.

No wonder there was a thunderous standing ovation with numerous curtain calls!
Congratulations Bangarra. I am looking forward to seeing many more performances in the years to come.