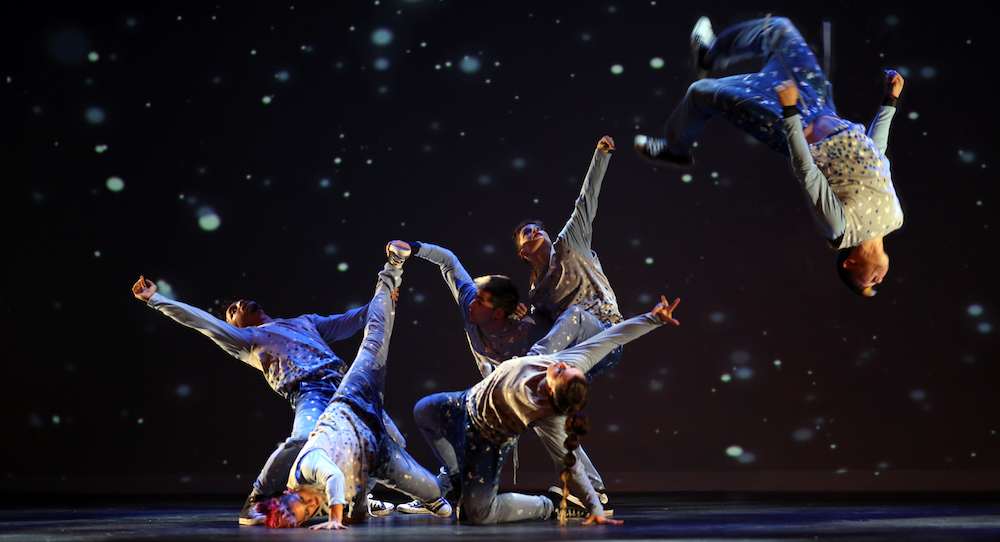 In its 10th season, the Emmy Award-winning The Hip Hop Nutcracker filled a Saturday evening in Newark with wintery, spirited delight. Guest MC and one of hip hop’s founding fathers, Kurtis Blow, starts the night off with a sing-along segment that ignites the crowd –– the energy is more like a stadium than a theater. Donning a graffitied white suit and bedazzled bow tie, he talks about a special kind of love that can defeat evil. There’s a DJ scratching records downstage left as Blow guides us through the history of hip hop. He pays tribute to Twitch, who recently lost his life to suicide, dedicating the show and the rest of the season to his memory.

A violinist enters and starts playing a virtuosic solo against a projected nighttime backdrop. A beat comes in behind the violin and dancers soon follow. Duets inspired by secret handshakes and creative scarf-ography fill the stage –– this must be the party scene. The choreography features a mixture of complex and simple movement that’s tastefully understated and musical. The performers’ facial expressions feel genuine, and they all wear black, white and gray street clothes.

Soon, Drosselmeyer, danced by Lisa “L boogie” Bauford, pops her way into the space, pulling a pocket watch from her cape. A breaker –– the Harlequin doll? –– performs an incredible head spin series before the Nutcracker enters with a shopping cart. Clara, danced by Ann-Sylvia Clark, enters soon after, carrying a boombox. She tries to teach him how to dance, and he gets very excited. When she touches him, he does the same excited dance and the audience laughs.

It starts “snowing” and a dramatic duet with krump and whacking influences is danced by Clara’s parents. They are in a fight. The dad, Bryan Longchamp, is a standout performer throughout the piece.

Soon, it’s time for the rats to lay their claims. The Christmas tree grows in the backdrop and the rats perform an energetic breaking section. The Nutcracker comes to rescue Clara from the rats with a big knee slide. When he fails, Drosselmeyer revives him. New red shoes fall down from the ceiling, and the Nutcracker eagerly puts them on. The soldiers enter, and led by the Nutcracker they defeat the rats once and for all.

Clara and the Nutcracker join in a romantic duet, and the music builds as the clump of “snowflakes” ripple in perfect sequence. A macro view of snowflakes falls in the backdrop, and it’s clear to see how their unique shapes influenced the choreography. A blizzard builds and snow falls on stage, marking the end of the first act.

Act II begins with the violinist playing beneath the illuminated streetlight accompanied by the DJ in the other downstage corner. Clara and the Nutcracker soon go on a subway ride simulated by the projection that takes them years back in time. Drosselmeyer once again shows her pocket watch as the cast reenters in vibrant costumes. We arrive “back in the day,” in the Land of Sweets. As a medley of solos, duets and group work (including a bonbons-inspired quartet) dances across the stage, the years build back up. The show concludes in a firework finale with a full group partner section and the violinist marching in step with the dynamic dancers.

The Hip Hop Nutcracker is undeniably a worthwhile take on the age old ballet. Its skilled dancers, diverse cast and fun-filled choreography come together to retell a classic story from an urban, New York City style perspective.