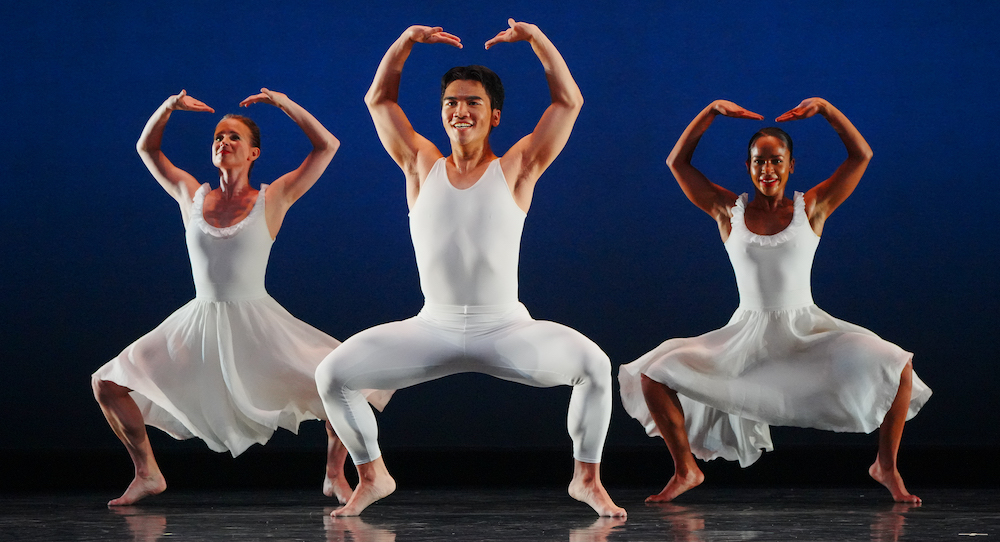 We sat down with Paul Taylor Dance Company (PTDC)’s freshman member Austin Kelly to talk about the company’s return to the David H. Koch Theater for its upcoming Lincoln Center season. While other Taylor dancers will feel right at home, it will be Kelly’s first time stepping on the renowned stage.

Kelly was hired in 2021, but had been around the company since 2018. He was an intern with the booking and touring coordinator at the time, and arranged to take company classes. He also attended some of the Taylor intensives. While he’s performed with the company a few times so far this year, this is his first Lincoln Center season with PTDC.

Was Paul Taylor at the top of your company list when you were looking to start dancing professionally?

“Yes. After my very first class taking Taylor, I thought, ‘This is the company I want to dance with for the rest of my life.'”

What connects you to the movement? What feels at home about it?

“In college, I had to take a lot of ballet, Graham and Limón, and those just didn’t feel natural to me. But I’m proportionate to a Taylor dancer; I have a larger back, my torso is long. That actually put me at a disadvantage in Limón or Graham, but it gave me an advantage with Taylor. Everything felt so natural. All of his Taylor-isms made so much sense to me – the wrapping, the scoops, the Vs… it just clicked.

What are some of your favorite Taylor pieces?

“So far, I’ve performed Aureole, which is what put Paul Taylor on the map. It sort of marked when he became the dance maker we know him to be rather than an avant-garde choreographer. I performed that at the Joyce Theater in June; that was the dream role.

A month later, I did Cloven Kingdom. There’s this men’s quartet in it where the gentlemen come out in tuxedos. It’s probably seven minutes, but it was the most athletic seven minutes of my life. The first time I performed it, I came off stage, collapsed and threw up. And the three guys I performed it with were like, ‘Oh, yeah, that’s normal. Welcome!’ For the Lincoln Center programming, Company B is one I’m really excited to do. I’m stepping in to Michael Apuzzo’s old role, who retired in March. It’s really humbling to step into such a big role within my first year. I love Company B. I loved watching it, and now doing it is the cherry on top.”

Do you see qualities or habits in older PTDC members that you want to adopt for yourself?

“Oh my gosh, yes. All the time. I cannot emphasize this enough: the people in this company are amazing. When they touch the stage, or even in rehearsal or class, they are performing. It is mesmerizing. Even in their stillness, I’m captivated by them, just standing there with purpose. They can hold focus. When they’re looking across thousands of seats, you can tell that they’re seeing something; their eyes aren’t just glazed over.

Another thing I’m working on is to absorb the moment. We assume characters, but they’re humanized versions. It feels like Paul was ultimately about the human condition and experience. So rather than putting on a façade, how can I amplify what this character is feeling in a humanistic way? These dancers do that so naturally. They’ve probably worked on it for years, but it feels natural. Paul was the master of light and dark dances, and these dancers can do the most beautiful things and then create most ugly characters. The dichotomy is fascinating.

Eran Bugge has been with Taylor since 2005, and we went to the same college. She taught a masterclass while I was there. It was so cool to dance with a Taylor titan like her while I was still a college kid. And now I get to dance with her on stage Lincoln Center? Like, come on. Come on! That’s insane. Sorry, I could go on and on about my co-workers!”

It sounds like you’ve absorbed so much of the Taylor history. You’re one of the first generations of PTDC dancers to join after Paul’s passing. How do you see the veteran company members pass on his vision and artistry to newer members like yourself?

“I came in after he passed away, which was unfortunate. I’m thankful for the people who’ve been here before me who really keep his ideas alive. People who got to work with him, and the stories they tell. Those stories piece together the character he was. I never got to meet him; I’d only read about him in textbooks. Although that makes me sad, it also makes me grateful for people like Bettie de Jong, who was his muse and is now our rehearsal director. She just celebrated her 60th year with the company. I just came from a rehearsal where I heard her explain – Paul wanted this. Paul did not like this. Without her, we’d drift off into interpretations. But the alumni come back and say, ‘Well, when Paul was choreographing this on me…’ and ‘Here’s what he was thinking about when he was creating this phrase…’ and that’s just so cool. I want to embody what they felt when they were in that creation with Paul. It keeps me tied to his legacy.”

See Austin Kelly and the PTDC members on the Koch stage at the Lincoln Center from November 2-13. Tickets start at $15 and are currently on sale. You can catch a seat on Opening Night on November 1 for just $10, on sale Monday, October, 17, at 12pm. Programing includes Art in Court, Company B, Gossamer-Gallants, Syzygy, Scudorama and others. For tickets and more information, visit www.davidhkochtheater.com/tickets-and-events/paul-taylor