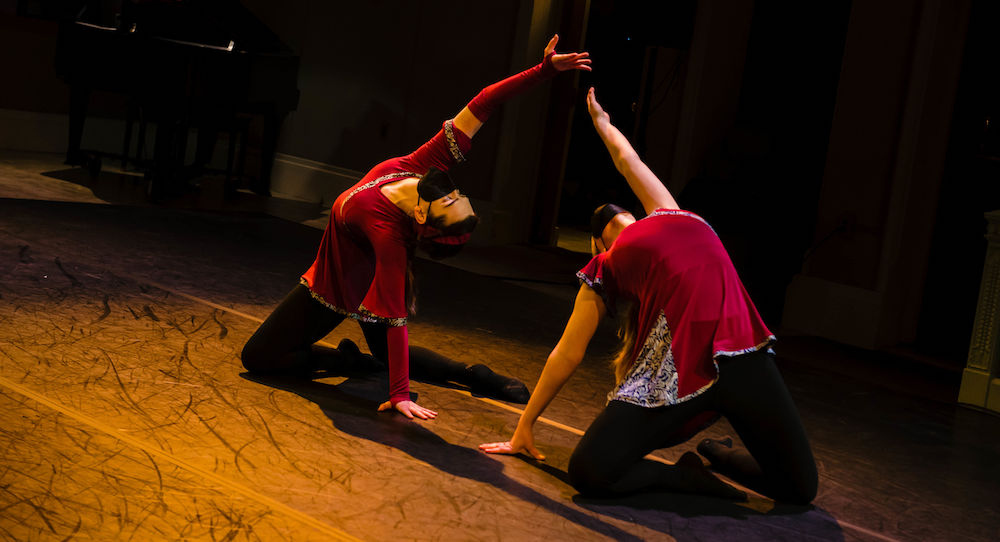 Art to spur social change isn’t anything new, and certainly not new to the work of Abilities Dance Boston – which “disrupt(s) antiquated ableist beliefs and disseminate(s) the value of inclusion through dance” (abilities.org). The company’s recent program Intersections, however, brought an even more concrete, actionable and locally-focused approach to their work and mission.

It was also the company’s first live show since early March of 2020: a hopeful turn, that hope found in the warmth and brightness of Abilities Dance Boston’s Director Ellice Patterson as she welcomed audience members to the show. The program shed light on activists and artists – both past and present – who have built bridges between various communities in their quest towards justice and flourishing for all.

These were human stories, those demonstrating that we don’t have to build walls between us as we work towards a more equitable world. That’s a conviction which Patterson underscored throughout the program, and which the program illustrated in movement.

The program also highlighted legislation that, if passed, will expand access and contribute to overall well-being for individuals with disabilities in Massachusetts. On top of the meaningful live art presented in the program, that aspect gave audience members specific ways in which they can help make a more just world – starting right in their own communities or their own backyard.

Each piece in the program was connected with a piece of disability rights legislation currently in the Massachusetts state legislature: making policy (which can feel dry to many) much more visceral and real, in a human sense. To set a baseline of understanding, at the beginning of the program, Director of Advocacy Harry Weissman described these bills and their potential positive impact. Other works in the program made more vivid the experience of life with a disability – therein making the potential impact of this legislation far more than theoretical or intellectual.

Memorable and meaningful to me personally, Patterson also encouraged audience members to let the company know if they have feedback on how they can more effectively and more assuredly work towards their mission of access and equity. That opened another door for audience members to be part of this work. It takes a village to raise a child, and it also takes one to make the world a better place.

Exemplifying the historical human stories illustrated in the program, the program kicked off with a duet (danced by Scynthia Charles and Caroline Bradbury) depicting the struggles and triumphs of activist Fannie Lou Hamer. In a video introduction to the piece, Patterson explained key aspects of Hamer’s life and work. Each piece in the program had such a video introduction, offering the sort of greater understanding which can bloom into greater appreciation for the dance art to come.

As always with Abilities, all pieces included audio description of movement, in order to build universal design – wherein all audience members, regardless of disability status, can experience and enjoy the live art at hand. As with the pieces to come in the program, these audio descriptions shared movement but also thematic and narrative elements – such as, in this piece, how Hamer fought for both racial equity and disability justice.

Original composition from Abilities Director of Music Andrew Choe added another auditory layer underneath the description, enhancing the narrative and emotional valence of both movement and audio descriptions. Costuming (by Laura Brody) in this piece was also something that established a theme for costuming in the whole program to come – variations on which enlivened each work.

This theme was full of cuts both Grecian and regal, forest greens and earth tones but also brighter spring pastels: both classic and cutting-edge. This theme and variations of costuming throughout the show also further instilled a sense of commonality among the stories told and told in movement, of a united movement for liberation of all.

Choreography began with slow and fluid movement, like a brook tricking steadily from its source. It moved with a weight to it, supported by low oboe tones in the score. Movement sped up before too long, but remained thoughtful. Charles and Bradbury offered lovely articulation of the spine as they rolled up to stand. They grounded into the Marley below them, without restriction or reservation, as they bent deep with feet wide and knees pointing to the wings (second position in dance parlance).

The duet partners remained attuned to each other as they moved in unison. I did wonder if some non-unison might have brought more visual and energetic dynamism to the stage. Yet thematically, the sense of the dancers remaining united felt poignant, emblematic of creating intersections of various marginalized groups and their allies.

At the body level, in the way movement found fresh shaping and thrilling kinetic pathways, the piece demonstrated a new level of sophistication on the part of Patterson and company members (as wonderfully intentional and committed what they offer has always been). COVID has strained our hearts, our minds, our bodies, our bank accounts, and so much else – yet, for many of us, it also brought new perspectives and new growth.

These past two years have brought unprecedented struggle and uncertainty, but also space for reflection and creation. Perhaps all of that has led company members to notably grow as movement artists. One would have to hear from them to know more there, of course – I can only say what I experienced, and thoroughly appreciated, as an audience member.

Following that was a piece illustrative of the works in the show that brought audience members into aspects of living as someone with a disability. Audio description brought that experience more specifically into Boston, even referencing the legislation described at beginning of program – making the picture even clearer through specificity.

As Patterson described in her introduction, the work drew in movement an idea that had intrigued Patterson in her own reading and personal development: reciprocal caregiving. Making that idea tangible right out of the gate, the work began with two dancers – Jamie Desser and Claire Lane – facing each other.

Dancers swerved through their spine, serpentine and supple, then just short of embraced each other. That mirroring, which resonated from there into the piece as a while, was visually compelling but also thematically meaningful – the seeing and holding of each other in selfless care. Arms floated like seaweed, evincing ease and connection with the truth of their bodies.

There was very balletic movement later on in the piece, and I did wonder if that could be softened and reformed more seamlesly blend with the more contemporary movement. Alone, these movement modes were lovely, and would be even more powerful if cohered together.

As another window into the embodied experience of disability, the next piece brought us kinetically into American Sign Language – with the physicality of ASL. Clever partnering brought memorable moments such as a dancer using a wheelchair turning her duet partner while she lengthened a leg backward in a lovely line (Erin Murphy and Kate O’Day).

This lightness and grace of such moments met those with more ferocity – such as meeting strong downbeats in the score by making percussion with their bodies. Reflecting that fiery energy, the audio description named “demanding” rights. All in all, this piece – like the program overall – underscored how movement doesn’t need to be a huge leap or a turn with endless rotations to be captivating and powerful.

Exemplary of the pieces in the program on the life and work of contemporary activists and artists was one illustrating that of Mark Travis Rivera. The choreography came right out and made itself known, immediately dynamic and multifaceted: with weight sharing, partnering, and turns with a mirror reflection in space.

Offering a captivating confluence of the two dancing bodies, canon was rhythmically on point and then seamlessly moved into weight sharing. Motif brought a cyclical feeling to that confluence, speaking to the ongoing struggles and experiences of families who would be affected by the legislation connected with the piece, were it to become law – therein poignantly uniting the worlds of art, social action, and public policy.

Another piece earlier in the program based on a contemporary activist was memorable, in particular, for its thoughtful and intriguing spacing and formations. Connected with legislation on making wheelchair repair more consistently accesible, formations and movement vocabulary reflected the spokes and wheels of wheelchairs.

Leaning on one another, the ensemble created a deeply visceral sense of support. Crossing one another in pathways through space, mirroring one another in space, they embodied a sense of reciprocity and the dance of relating. Sections of all them dancing their own movement vocabulary brought even further dynamism, that which I remembered far after the curtain dropped.

And that’s just the thing – art integrated with social action is designed to stay with you far past when you step out of the theater and back into the freneticism of twenty-first century life. Intersections added a local element to that dynamic, therein making its imagery, ideas, and values all the more relevant and impactful.

Seeing how Abilities Dance Boston continues to grow was also meaningful for me as well – and I’m excited to see the company keep growing. Most of all, I’m grateful for artists like these who understand the power of art for social change, and commit themselves to leveraging that power as best they can. The world that we know today is better for it. Let’s keep pushing it all forward!