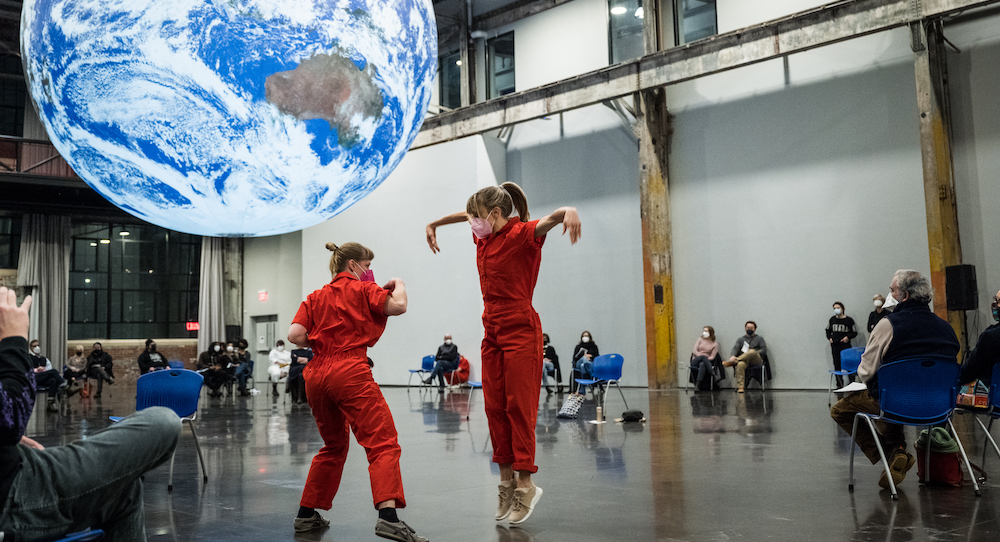 I (very happily) committed to review the 2022 Motion State Dance Festival, and it was one of those times when I didn’t quite know what to expect. It was my first time reviewing work from the organization, and my first time at Waterfire Arts Center. I walked in and delighted in the expansiveness of the space, with high ceilings and a wide, long floorspace. That all paled in comparison to the installation flying high above my head: a large globe complete with authentically-illustrated oceans, land masses, and clouds swirling above them.

Something in me knew that the works at hand would lead me to think deeply, but also feel inspired: to commit my mind and my actions to forces far beyond myself. I was right. The two works I experienced, Air Stream (conceived by Lila Hurwitz and Andy Russ) and Edisa Weeks’s 3 Rites: Liberty employed bold, enticing choices to make audience members reflect – and beyond that, to recognize the possibilities within themselves to act upon that reflection.

If that process might not have played out for any given audience member, the aesthetic structures and qualities at hand were more than enough to make their attendance far more than worth their while. The power of aesthetic force is not to be underestimated, even in – and, arguably, especially in – times that can feel as uprooted and tenuous as these do.

The first work in the festival that I took in was Air Stream, one as unconventional as it is curiosity-provoking. Upon entering, Motion State Arts Co-Producer Ali Kenner Brodsky told myself and another audience member that ”the rules are that there are no rules,” (both of us smiled). Andy Russ, who opened the work with an introduction and also provided the work’s sound score (and also served as another Motion State Arts co-producer), echoed that sentiment.

Chairs were spread throughout the space, underneath that big beautiful globe, facing in all different directions. We audience members were not only allowed to switch or move chairs within the space, we were encouraged to do so, Russ added. This was not your average proscenium-theater dance performance atmosphere. As some audience education (something I often advocate for), Russ also explained that the dancers were working by an improvisational score during some parts of the work and at others it was “anything goes”: 100 percent improvisational. I was intrigued!

With Russ saying “begin”, the dancers began to walk into the space, and the work commenced. The ensemble of six walked diagonally, in a straight line, all wearing orange jumpsuits. An old-fashioned train whistle rang out, and they all stopped. After a beat, they began to move out of the lines and in their own ways: angular and geometric, executing action and stillness.

Some dancers instead ran in circular or line patterns: building dynamic contrast, and diversity of aesthetic and energy, within the ensemble. The only score was the sound of their feet (some sneakered, some socked, some bare) moving across the floor. For now, they also didn’t connect – physically or energetically.

As beautiful movement in and of itself, I delighted in what was transpiring through the expansive area. Under the globe, and moving in their own ways after the initiation of a train whistle (a sound classically signifying the workday starting or ending), I also thought of the structure of all our lives, so often organized by our daily work: getting up by our alarm clocks, working much of our days, having a little time to ourselves when the day’s work is done, and doing it all over again the next day. And on and on it goes.

This pattern of the train whistle assembling the dancers, and then them moving in their own ways, repeated several times – fortifying that cyclical, day-to-day sense. Audio elements soon added another layer; snippets of newscasts, broadcasted prayer gatherings, and static in between those audio pieces filled the space. Indeed, there’s a lot of noise that can fill our 21st century lives. Movement evolved from there, arms emulating wings and – contrasting earlier disconnection – partners finding spatial relationships, curiously exploring each other.

A driving beat coming in, as a score, enhanced these explorations and added a sense of intriguing tension. Poetic speech from Russ replaced this driving beat. He spoke lyrically about a man working at his dream of building a flying machine. I thought back to those gestures and shapes of flight. In the context of the “work-a-day” world sense at play here, I also reflected on reaching for dreams and the realities of the labor-structured world getting in the way of that reaching – and ultimately in the way of touching whatever our dream may be.

The abstraction within the movement and the poetic lines of speech also seemed to encourage audience members to find comfort within uncertainty. The multitude of possibilities within language and movement can bring more questions, rather than answers – not always easy for us as citizens of this outcome-driven world.

Those possibilities are ours to treasure if we can learn to appreciate process just as much as product: “a little like a needle following a tapestry,” Russ said, allowing product to become its potential by allowing the process of creation to unfold. Russ’s final word was “and”, creating a clear sense of continuance and multiplicity.

It all goes on: a perpetual cycle of days and nights, work and rest, connection and disconnection. Works like Air Stream can add a little more thoughtfulness and creative possibility into that cycle of ours. If we think that we can’t reach for that vision of what our lives could be, such works can challenge us to ask ourselves “well, why not?”.

Edisa Weeks’ 3 Rites: Liberty came two nights later. It even more forcefully epitomized bold and thought-provoking – to the extent of potentially drawing up productive discomfort within audience members. The work is a work-in-process, and will ultimately be one out of three acts in a larger work from Weeks, to be presented in Brooklyn, NY, in the fall of 2023. Violet Asmara Tafari provided production direction and stage management, Marýa Wethers creative production, and James Scruggs creative advising.

It began with audience members entering through installation pieces of white tendrils hanging from the ceiling: rough, long but unpredictably shaped (set design by You-Shin Chen). Knowing a bit about the theme in the work of race and symbols around it (from the program), I wondered if this was an illustration of dreadlocks. There were aesthetic and energetic curiosities such as these to be appreciated from the absolute get-go.

Upon entering and finding our seats, we audience members saw Weeks: seated with clothing in watermelon colors and nothing but balloons covering her upper body (prop/costume design by Weeks). She was shaking, vigorously but with an internally-directed sense, bringing a feeling of deep but contrainsed unease. The vulnerability in the exposure and raw disquiet here hit me like a ton of bricks – and that was just the beginning.

Next I recognized how her braids, standing vertically, were attached to pulleys that had objects pulling downwards on their other end. As the program explained, these objects represented objects that typify narratives around African American culture and Black people more broadly: a Bible, a gun, expensive sneakers, a watermelon. The confinement that her body was experiencing was fully palpable.

Weeks began moving more vigorously, and also added deeply resonant vocalizations to match her turbulent movement: alternating betweens laughs and guttural screams. In strained speech, she asked an audience member to get her water from a pitcher and glass on a small table to the side of the space: beginning the audience engagement that would be a big part of the overall work. Yes, I was uncomfortable in my body and spirit – and my brain was telling me that was the point (or at least a big part of it). The threads hadn’t fully come together for me, however.

It all did begin to truly click for me in that way when voiceover described how pathologizing of Black people’s behaviors is inextricably linked with the history of psychiatry and mental health: a description complete with a nauseating real-life example of that playing out in one young man’s life (and therein forever altering its course, and not for the better). She soon also applied Blackface and clown makeup, deepening the sense of inauthentic portrayal and motivated misunderstanding. Nathaniel Braddock provided sound score, and Tin Cryan served as lighting designer.

Weeks’s strange movement and vocalizations, the symbols of narratives about African American culture, the discomfiting atmosphere arising from it all: it all made complete sense. But I wasn’t any more at ease. My comfort wasn’t the point. I was to be provoked enough to think and face hard truths, I do believe.

Hope soon began to percolate from underneath the heaviness here, however – beginning with Weeks finally untying her brains from the pulleys attached to those weighted symbols that were pulling her downwards. She could then get up from her chair and move freely. That was surely an improvement, but her work wasn’t done. She still had things to share, truths to underscore.

Weeks then involved audience members again, asking them questions about the history of race in the U.S. and engaging them in chance procedures (those that led to vivid and upsetting stories). She seemed to be taking on a different persona – more confident, more able to clearly communicate – but still with trauma impacting her intra- and interpersonal experience. Even as she described deeply saddening stories, she shared and connected: cutting up a small watermelon and passing a plate of slices for audience members to enjoy, for example.

Then the hope and joy truly arose, beginning with an inspiring sharing: every morning upon waking, she commits herself to dismantling racism, she shared. “But I can’t do it alone,” she affirmed. She then led us in a chant in which we proclaimed that “I will, we will, undo racism.” It was then our turn to share other things that we wanted to undo, she noted: audience members suggested sexism, income inequality, and environmental degradation.

We did our best to put those words into the rhythm of the chant, and some awkwardness in the rhythm had us laughing. Laughter connects us and breaks down walls of fear. Something had happened; we weren’t quite the same group that we were when we entered the space an hour ago. We had found threads of connection that we didn’t know were there. That’s one of many powerful things that live art can catalyze. That catalyzing often takes boldness of approach and the courage to guide audience members to a place of uncertainty, maybe even outright discomfort – and 3 Rites: Liberty brought all of that in spades.

However audience members proceeded from when they left the experience was up to them, but they had gained something: a new way or ways of thinking, of seeing, of understanding. Perhaps they even gained inspiration to create something of their own or to change something that needs changing. I didn’t know that I’d find that in Motion State Arts’s 2022 Motion State Dance Festival, but I’m so glad that I did. Thank you and brava to all involved artists and collaborators for making all of that possible. You can never quite know the meaningful ripple effects that you might initiate.