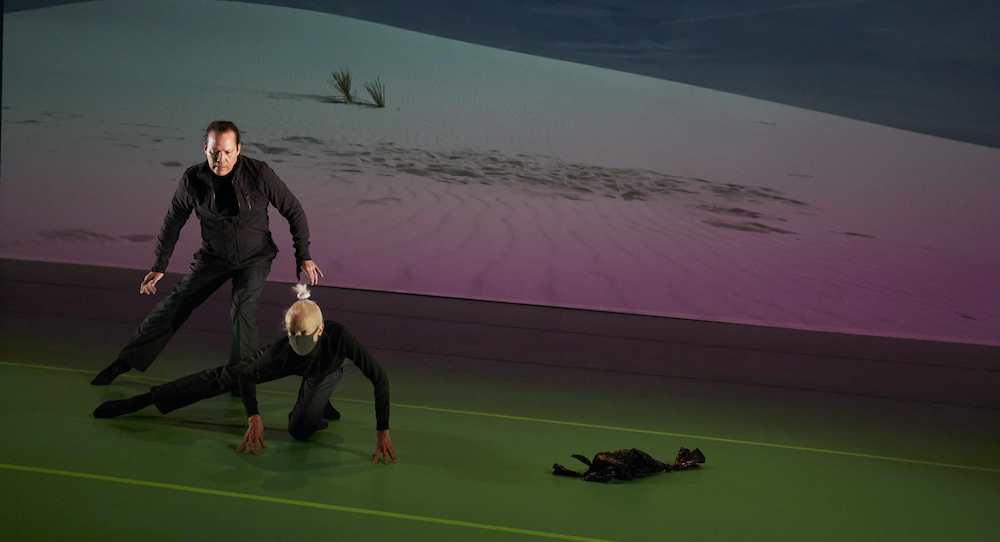 Armitage Gone! Dance’s A Pandemic Notebook is a series of short works that brings together screendance and live performance in an evening characterized by experimental costuming, a great deal of silence and leg flicks, and lots of green light. Nothing in the evening feels improvised besides the speech given by Karole Armitage about her prolific artistic history when the film projector tragically breaks down mid-show. Dancer Sierra French stands out for her impeccable technique and near flawless execution.

In the first piece, Beautiful Monster, two dancers wearing gold dresses, heels and caps that look a bit like thumb tacks perform slow mirrored movement with deadpan faces. The choreography is highly controlled, frontal but not showy with its tendus and swivels. A dancer in a black face mask and winglike (which gives the illusion that his arms are down even when they are lifted) jacket crawls in as the word “forever” is repeated in the operatic music. He pulls the dancers faces together and soon enough he begins to undress one of them. She then removes all but her undergarments (including her fake lashes), and it’s apparent that a power dynamic is being explored, but the stakes are not clear; the intensity is not felt. The piece ends abruptly with the undressed dancer donning sunglasses.

The next piece, Killer, was an anarchic film displayed on three identical vertical screens (evoking iPhone videography at its finest). We see the dancers (who each wear rabbit-ear hoods and black masks) reaching down at the camera –– reaching out at us –– performing virtuosic movements as well as neck and hand dominant choreography. The coloration is stark red, and crisscrossing limbs and camera-rattling stomps are interspersed with no shortage of crotch shots. As the film progresses, the bodies begin to look abstract, and distorted music featuring a stirring whine and hard accents add to this effect. The piece is geometric and creaturely, and as with Beautiful Monster, it ends abruptly.

The third piece, Head to Heel, left much to be desired; with its facial manipulations, quick circling fingers and pinkish organ-like costume appendages (meat wings?), the barefoot animalistic movement didn’t seem to communicate much.

Based on Roberto Rossellini’s film, “La Prise de Pouvoir par Louis XIV,” Louis was perhaps the highlight of the evening. An exuberant parade of royal power dynamics, both the king and his subordinate are mocked over the course of the piece. First, dancers enter the space wearing pastel character shoes and cream-colored bonnets. They set up the absurd scene (two chairs and two styrofoam mannequin head displays inexplicably covered in a pink sheet) with undue cautiousness and care, and courtly positions and movements, yawns, pets, and shakes dominate the performance. The movement is less intense than the music, but follows its rhythm, and several farcical vignettes take place; faces are covered by a dunce cap, heads are knocked on like front doors, and a cane is used to measure phallic length. Eventually shoes and adornments are removed and clothes are thrown at a distressed man. It is almost as though there’s an encoded narrative in Armitage’s composition that we might be able to glean more clearly if we watched the piece enough times to translate it into a language we can readily understand.

In Time/Times, we have the pleasure of watching Karole Armitage perform (alongside Jock Soto) for the first time in 30+ years for what she claims will be (possibly?) the last time. They dance in front of sweeping natural landscapes and the piece feels less outwardly performative and more internally charged than the other works in the show. While there is a gentle surprise in many of the movements, Armitage’s dancing feels controlled, almost as though she is balancing on a beam. It seems clear that the dancers are interpreting the scenes displayed behind them.

In 6’ Apart, one dancer functions more as a technological element than what we typically think of as a “performer.” There is an iPhone attached to the top of his black baseball cap and the iPhone camera captures the live movement of two dancers upstage. A rattling sound is produced by the shimmying of the observer and the timing of this shimmying seems to be agreed upon with the other dancers though it does not quite appear to affect their movement. He swivels in his chair, performing the watching of the other dancers. When he is still, the space is silent. While the eerie effect of a technological entity conducting and tracking the dancers is initially intriguing, by the end of the piece it feels stale.

We then see a demonstration of a filming session. Much of the piece is meant to be recorded from below, and we are told to imagine 8’ long limbs as the dancers slide across the space in various shots, one of which is referred to as the “shooting star.” The sound score swirls in a faintly ominous tone, and I imagine the demonstration holds more intrigue than the actual film might, though of course this is only speculation since the projector was no longer working by this point.

In the final piece, Marc Jacobs, a larger cast of dancers in a variety of costumes––some effervescent featuring pointe shoes and platforms and others quite plain––comes together in a celebratory groove that features much unison. The piece and the show as a whole felt more like hitting random notes on the piano than a “song,” and left me thinking that it must be fun to be Karole Armitage, to make bold choices without constraint or self-consciousness. Her work doesn’t seem to care much about what the audience thinks, and it is up to us to determine whether we like that about it or not.