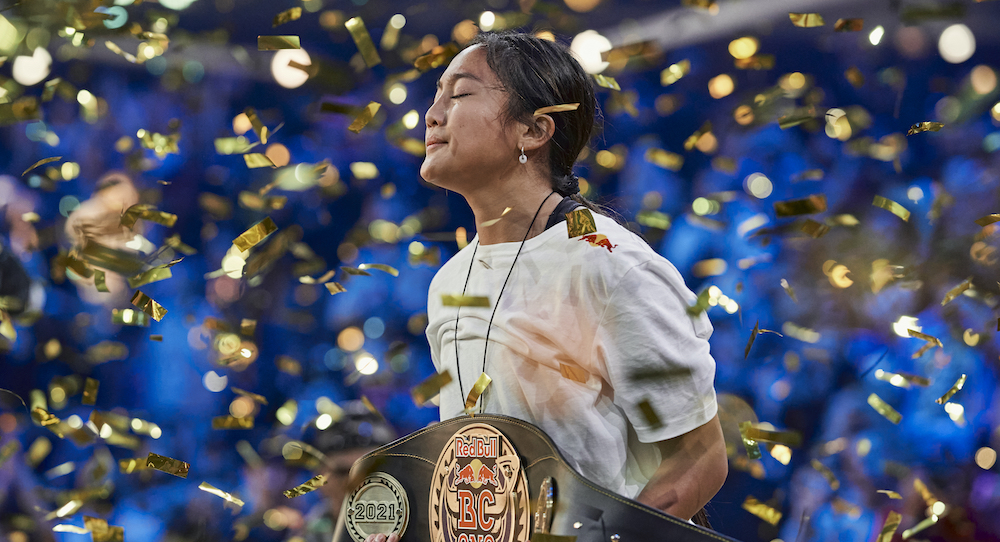 Every year, thousands of breakers compete for a chance to compete in epic breaking battles at the Red Bull BC One World Final, one of the biggest and most prestigious one-on-one breakdancing competitions in the world. This year, 16 B-Boys and 16 B-Girls earned the right to enter all-out battles on the BC One stage, but only one male and one female would be crowned the champion and be handed the championship belt.

California-native Logan Edra, aka Logistx, not only represented the United States in the finals on November 6, but was also crowned the B-Girl champion.

The 18-year-old, who is a member of the Underground Flow crew and BreakinMIA, previously won the 2018 Silverback Open B-Girl solo competition, as well as the junior breaking Seven to Smoke battle at the 2019 Radikal Forze Jam. This year was only her second time competing at Red Bull BC One.

Leading up to the battle, Logistx spent three months training six or seven days a week, as well as three or four workouts a week. Outside of training physically, she found it important to work on her mental health.

“It was kind of like making sure my nerves didn’t get the best of me, working on how to control my thoughts and emotions and energies,” she shares with Dance Informa during a Zoom interview.

This type of training came in handy not only when getting to Red Bull BC One but also in her final battle against B-Girl Vavi from Russia.

“I always get nervous,” she admits. “It’s really hard for me to not get nervous. I also deal with really bad anxiety. Honestly, I think just being aware of what’s going on in my mind and what my thoughts are saying, being aware of the nervousness and anticipation of anxiety, where it’s stored in my body.”

When she’s in the moment, however, Logan allows Logistx to take over her body.

“When we’re athletes or competitive artists, we can’t be in our human mind,” she says. “I changed my identity from Logan to Logistx, and that has to happen for me to perform at my best. I was telling myself I was going to beat [Vavi] and I was going to get the belt.”

Tuning into her “alter ego” on stage helps her become more strong and competitive instead of being her typical humble, nice and sensitive self. However, no matter how confident she can feel on the stage, she’ll always leave any “arrogant” energy on the floor.

“That’s the place where it’s allowed,” Logistx notes. “It’s a battle. It’s where you’re fighting. Once you’re done with the battle, that’s when it’s done and you’re not trying to beat the person, just turn back into your human self.”

When Logistx turned back into Logan, the emotion of winning the belt – a dream of hers – took over. It not only gave her a sense of validation, but it gave her more belief in herself.

“Being 18 and being a young woman, especially a young woman of color, it’s hard to get into a place of confidence where you feel not only accepted but also accepted for your personal choices and decisions,” she reveals. “This was almost another form of validation for my place in this society and this world.”

She credits spiritually tuning into her ancestors for her strength and protection. “I channeled my ancestors, higher guidance, my tribes/crew near and far,” she shared in an Instagram post after her big win. “These moments on stage were in my meditations, dreams and prayers. I set the intention with myself.”

Now that she has achieved her dream and won the belt, Logistx has her eyes set on her next goal: Paris 2024 at the Summer Olympic Games. This will be the first time breakdancing will be part of the Olympics.

“I think everything in my life is always preparing me for the next thing, especially battling at BC One and feeling so comfortable on that stage,” she shares. “Now, I feel like I can do so much more. BC One is one of the most intimidating competitions and one of the hardest battles I’ve ever trained for. The Olympics is going to be a next level for me in 2024. I’ll be ready for it.”

At the end of the day, it’s not the title, battles or wins she’s looking for; it’s the way she handles herself off the stage and lives her everyday life.

“What defines me is the goodness in my heart. My integrity. How I choose to treat other people. My relationship with God. All of these things are more than winning a title. If you continue to be a good person, the energy of karma will give you awards and accomplishments and all the things you deserve. I’m a firm believer in that.”

Logistx continues, “I want people to believe in themselves if they want to accomplish something. You know yourself best. You need to follow yourself and trust the universe and what God has to offer. Be a good person, always. The good energy you put out will attract back to you.”