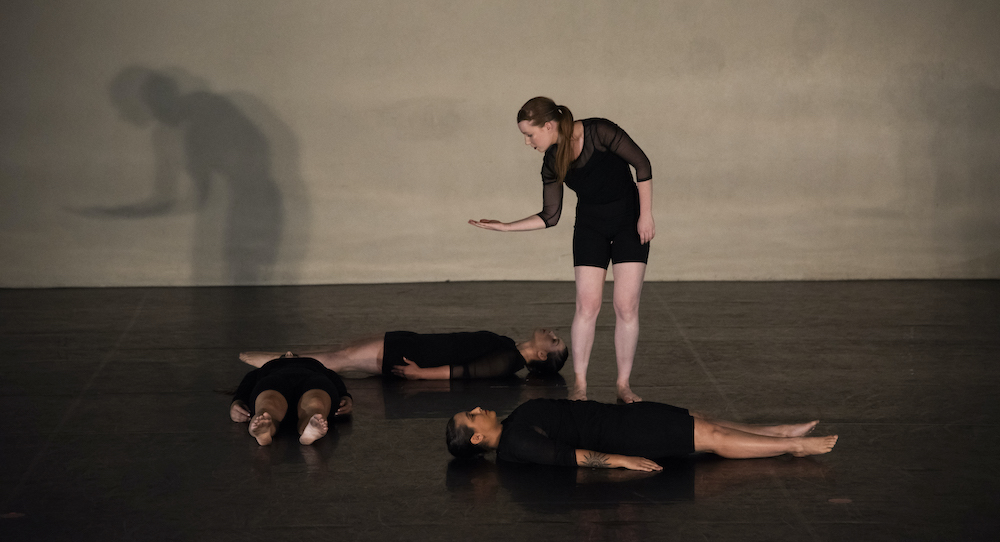 “Pivot”, in the metaphorical sense of shifting course to adapt — it’s become a bit of a dance world cliché over the course of COVID (and yes, there’s a sort of obvious pun there, too). All humor aside, Nozama Dance Collective’s N2 made me think of that sense of pivoting. For one, it’s the Boston-based company’s first program since leadership shifted hands — to the new Artistic Director Dana Alsamsam.

For two, the performance was to take place outdoors — in a park, lush with summer growth — but Mother Nature had other plans (namely, a storm). The company successfully, and quickly, moved the performance to a local studio with a suitable performance space. Through that night’s program, the company showed what it means for artists to not only make it work, but thrive and evolve, in the face of real-world shifts and uncertainties.

Kicking off the program was the thought-provoking and layered White Noise, choreographed by Juliana Willey in collaboration with the dancers. The dancers walked in patterns, wearing simple black costumes at thigh and elbow length. Gradually, purposefully, the choreography layered in more intricate and rigorous movement. A score of white noise, appropriately enough, accompanied them (Labrinth’s “Forever”).

In both unison into non-unison phrases, the movement became more expansive, accented and energetic. Traffic pathways, putting moving bodies in conversation with each other without touching, became increasingly compelling. That idea has been prescient in this last year and a half; how can we find connection and be in sync when physical proximity isn’t possible?

Building an atmosphere for such deeper thought, emerging in the score was a voice soulfully exploring its range, but repeating its notes — those becoming a mantra. The movement also reflected that soulful exploration, yet was also imbued with rigorous clarity.

Unexpectedly, at one point, the dancers together paused and shifted slowly sideways before returning to locomotive movement. I wondered what the effect of even more time in that slow shifting could have been — perhaps more dynamic, and effective, opposition in timing. Through a broader lens, I also pondered if that was what the piece was trying to create — a sense of polar opposites: black and white, night and day, dark and light. Elements of that were there to be found, as was so much more.

Later, the dancers fell to form a square formation with their bodies. Facing outward, they reached out and curled back in. Rising to their feet, they made their square three-dimensional — and then made it significantly larger by moving outwards towards the four corners of the space. This structure, and the stage pictures it created, was clear and satisfying. The ending was no exception; aligning with the tone and tenor of the piece, it conveyed a continuance yet also clear, precise boundaries.

Coming next was Madison Florence’s Duality, another piece building a sense of two opposites — through highly intentional design and choreography. With white and black in costumes, a segmentation of two pairs of dancers was clear from the very first notes of the score (Instrumental, Stateless’s “Song for the Outsider”). As they moved through formations, spacing segmented the two groups in various ways — one group to the front and another at the back, and one group wrapping around the other upstage and downstage, for example. That all added visual layers to unpack, and kept things fully dynamic.

The two groups also had different movement qualities, executed in alternating parts. Yet a shift came with them in unison together, their movement qualities meeting somewhere in the middle. I wondered, has one force influenced its opposite here — through proximity or some other kind of gravitational force? There’s a lot to chew on in this seemingly simple concept of opposites! That’s something this company seems to do well, finding the layers to explore in something seemingly mundane.

The score also had duality on several layers: more allegro and more adagio sections, harmony and melody lines with opposing qualities, continuous up and down beats that alternated in an early section of the music. It was all cohesive, evincing how thoughtful and rigorous their process must be — to discover and solidify all these layers to the point of performance-readiness.

Nora Le Guen’s Polyphony came next, featuring the dancers of Nozama Dance Collective and choreographed by Le Guen. The work is a memorable illustration of a musical concept effectively realized in movement. Through dynamism and intricacy, one could see polyphony within the movement vocabulary itself. Variously-colored costumes and — of course — polyphony in the music itself, also reflected the sense of multiple aesthetic parts harmoniously blending. More than just intellectually rigorous, it was also simply pleasing to take in.

Maria Napoli’s Lonely, Too was another thoughtful piece, exploring loneliness through both mundane and abstract elements — just as loneliness is an intangible feeling within concrete everyday experience. The piece’s design elements built a mysterious feel, dramatic and foreboding — some might even call deliciously creepy. As one clear and intriguing approach to that atmosphere, ingenuity of shape and accentedness in movement met the rasp in the score’s electronica beats.

As another crisp contrast, the five dancers wore pedestrian dress — juxtaposing the otherworldliness in the score (FKA Twigs’s “Home With You”). Also crisp was the stage picture, formations remaining clear even as they molded into new formations — something else at which this company seems skilled at creating.

Later on in the piece, the score took on a more mournful tone. The speaker sought to understand and empathize more than to express anger and grief, as they had expressed elsewhere in the score. In accordance, the movement became softer and the dancers’ presence more expressive and open. As did many other ingredients in the piece, this shift  brought together two juxtaposing qualities to be in conversation. Short of that aesthetic and structural intellectual interest, it was pleasing to experience as a piece of art.

Autonomy was a bold, poignant work illustrating both the shared female experience and the remarkable range within that experience. Alsamsam choreographed the piece in collaboration with the dancers (the full company). A score of voiceovers from various women supported the vigorous, purposeful movement. The women’s sharing was raw and vulnerable, yet also imbued with calm and thoughtfulness — qualities also present in the work’s movement.

The dancers’ costumes matched — skin-tone mesh over short black unitards. Along with unison in the movement, that illustrated shared experience. Just as much, dancers moved through their own movement vocabulary — reflecting the uniqueness of each woman’s experience. Making it all circular and cohesive, both those qualities were also clear in the voiceover. The title is also reflected in the voiceover — “what I most want as a woman is autonomy,” company member Allison Rebecca Penn said in one of her spoken segments, a sentiment that echoed through the voiceovers in general.

What exactly is behind that desire, one might ask? It’s to have the power of choice and freedom to freely live within one’s unique experience. The artists of Nozama demonstrated that through the clear, resolute voices evident in the works of N2. The power to adapt to unexpected challenges and to grow through change was also undeniable. Through both of those things we all can grow and prosper through the storms life throws our way — and artists can lead the way.