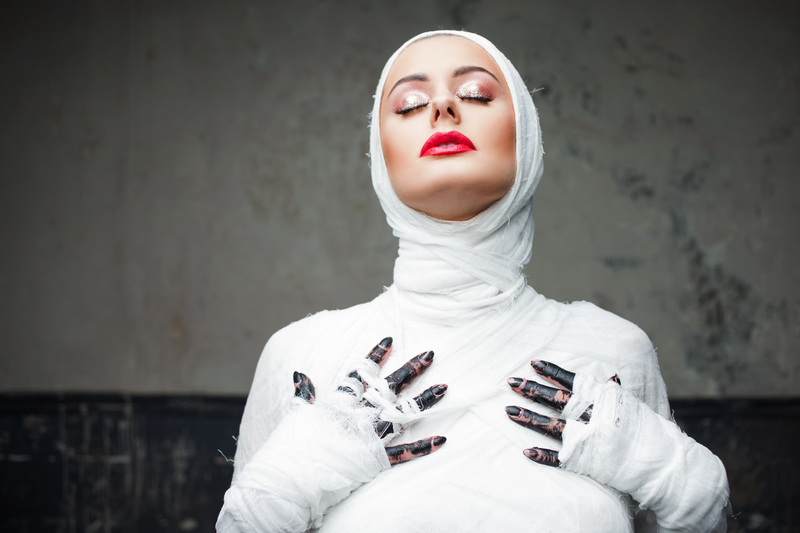 I was chatting with a friend recently who dances in a ballet company. While catching up, she complained that the dancers were being made to wear costumes none of them were in favor of. Now, dancers are no strangers to strange costumes. We wear what we’re told, whether it’s nothing but bubble wrap or a full fur suit. (Wait until you read some of the stories below.) But the dancers’ qualms with the outfits weren’t just that they were weird; it was that they were revealing, cheaply made and leaving the dancers prone to serious wardrobe malfunctions while performing.

I have my own similar experiences, and suspect just about every dancer does. I decided to send out the bat signal among my dance community, and ask others what their worst costuming experiences have been. In the torrential flood of responses, many dancers said that it wasn’t the strange or uncomfortable costume that upset them as much as their director or choreographer’s unwillingness to listen to their concerns.

The director of the aforementioned dance company was unwilling to budge on the issue, stating the choreographer’s artistic vision as justification. He reasoned that it’s industry standard for the creator to dictate what their dancers wear. And you know? He’s not wrong. Industry standard is the issue here. And there’s a difference between tradition and a bad habit.

With our studios reopening and industry reawakening, it’s the perfect time to inspect our accepted practices. Where are we going to draw the line between a director or choreographer’s creative vision and their dancers’ bodily autonomy?

Some of the anecdotes that rolled in from my research were funny, about dancers donning ridiculous costumes they’d have never picked out for themselves, and that only very debatably added to the artistry of the piece.

But other anecdotes were examples of that same creative freedom going too far, stepping on dancers’ sexuality and safety. Dancers told to tumble in masks with restricted vision, told to dance in stilettos (without training) on grated flooring, told to wear sheer unitards at elementary school lecture demonstrations under fluorescent lights. Classic tales of young dancers put in age-inappropriate costumes for competitions, and adults being pressured to perform nude.

Despite the obvious issues in the situations above, where to draw the line isn’t necessarily an easy question. A rule of thumb might be: don’t put your dancers in costumes that impedes the choreography, whether physically restrictive or mentally distracting. (It’s hard to focus on what you’re doing when you’re afraid of flashing the audience.) But the nature of our art form is being told what to do with our body. There’s an inherent power dynamic centered around physicality, so often linked to a dancer’s sense of self. That’s why eating disorders and other mental health issues run rampant in many dance contexts. It’s also why open communication and trust between company dancers and management is so vital. It’s the only way to avoid blurry lines.

If a dancer is game to use nudity or other artistic choices – note I say choices – to further an artistic vision, great! But if a seasonal contract that holds no mention of the costume in question (or even costuming generally) is being used in place of consent, let’s question that standard. A dancer should be able to raise concerns without fearing ramifications. Even if a dancer is hired for a show that is purposely sexual in nature  – say, a burlesque show – costuming expectations should be established first, and not used to hold the performer’s job hostage after being hired. We also need to uproot commitment shaming; in no way does refusing to go nude preclude you from being a ‘real artist’.

When a dancer says a costume isn’t going to work, believe them. Work with them. Unfortunately, that’s not what happened in the mentioned company’s case. When two dancers gathered the courage to speak up, they were removed from the piece and told they wouldn’t be needed for future dates.

As a creator, wouldn’t you want to work with artists who see your vision, and are after the same artistic questions as you? When hiring the dancers you’ll work alongside, to what extent are you evaluating your artistic compatibility? Are you seeing them as artists themselves, or are you simply seeing them as bodies to place your art on? The latter is all too ingrained, no wonder we end up in these situations.

Moving forward, maybe we can look to the standards film and television have in place for actor costuming. We can implement nudity clauses into our contracts and require increased fees in those circumstances. And let’s address not just nudity but safety and practicality as well. We can promote open communication between dancers and directors, and rewrite the norm for what dancers are told to put on and put up with. Let’s create conversations rather than expectations, and remember that our dancers are artists and people.