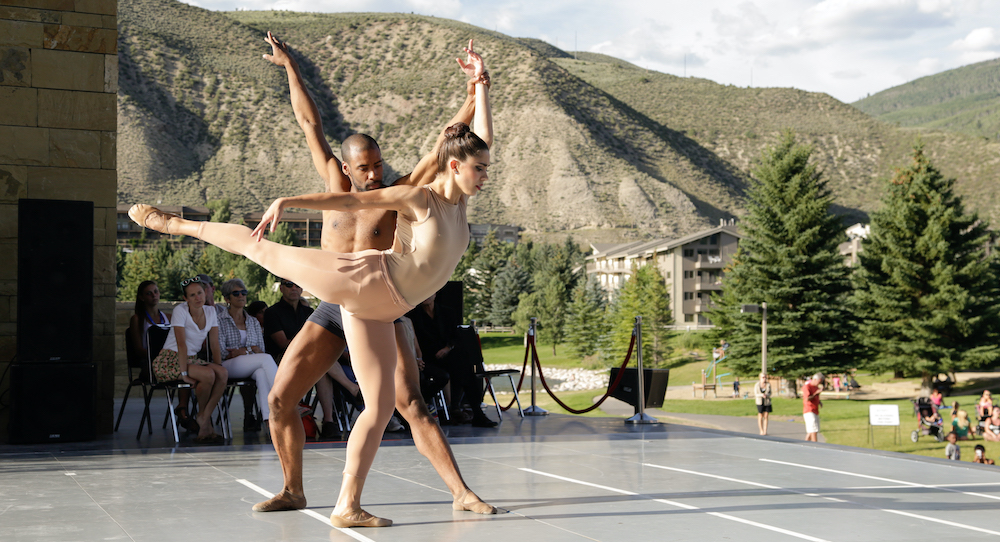 The Vail Dance Festival has announced plans to return in-person for its 32nd season July 30-August 9. Under the artistic direction of Damian Woetzel, the 2021 summer season continues the Festival tradition of creating innovative opportunities for artists and audiences as it brings together dancers, musicians, composers and choreographers for nine performances and numerous public events.

The 2021 Vail Dance Festival will feature American Ballet Theatre’s Calvin Royal III as Festival Artist-In-Residence, which will see him taking on new challenges as a dancer, including the principal roles in new works choreographed for him by Tiler Peck and by Jamar Roberts.

The Festival brings together annually a cast of established artists and promising newcomers, and among the dancers scheduled to appear for the first time as individual artists are the New York City Ballet (NYCB)’s Mira Nadon and the tap dancer Byron Tittle. They will join returning artists including Isabella Boylston, Herman Cornejo, Michelle Dorrance, Lil Buck, Joseph Gordon, Lauren Lovette, Roman Mejia, Ron Myles, Dario Natarelli, Tiler Peck, Unity Phelan, Cory Stearns, Devon Teuscher, Melissa Toogood, James Whiteside and more to be announced. Returning to the Festival after several years absence, are NYCB Principal Maria Kowroski who is in her final year with the company, and ballet and Broadway star Robbie Fairchild. The Scholar-In-Residence for 2021 is ballet dancer Philip Duclos, an advanced student at the School of American Ballet. Festival programming features these artists and many more in role debuts, new partnerships and new works, fulfilling the mission of providing new opportunities for artists at all stages of their careers.

This summer’s season will feature seven commissioned world premieres with choreography by Michelle Dorrance, Lil Buck with Lauren Lovette, Justin Peck, Tiler Peck, Jamar Roberts, Cleo Parker Robinson, and James Whiteside. New music will be composed by Composer-in-Residence Caroline Shaw, Christina Courtin, Rhiannon Giddens, and Tyshawn Sorey. Shaw is working with Justin Peck for a premiere featuring Tiler Peck and Herman Cornejo; Courtin, Giddens and Sorey are creating pieces expressly for the violinist Johnny Gandelsman, and those solos will serve as the scores for new dances by Michelle Dorrance (Giddens), Lil Buck and Lauren Lovette (Courtin), and Jamar Roberts (Sorey). In addition to formal premieres, the Festival will continue to foster informal new collaborations in Vail’s lab-like environment. Musicians for the 2021 season will include the Festival’s Quartet-In-Residence Brooklyn Rider, pianist and music director Kurt Crowley, and singer/multi-instrumentalist Kate Davis. Beyond new works for 2021, revivals of past Festival commissions are planned including Tiler Peck’s 1000th Orange from 2019 danced by its original cast of Cornejo, Boylston, India Bradley, Mejia, Lovette, and Christopher Grant.

NYCB launched its touring company MOVES at the 2011 Vail Dance Festival. Now, in 2021, NYCB MOVES returns to Vail, bringing extraordinary works from the NYCB repertory. BalletX, Philadelphia’s premier contemporary ballet company, will return to Vail as Company-In-Residence with performances at the Gerald R. Ford Amphitheater, as well as in a free performance at the nearby Avon Performance Pavilion at Nottingham Park. In addition to NYCB MOVES and BalletX, appearing at the Festival this year is Cleo Parker Robinson Dance which is celebrating its 50th anniversary season, and will present a world premiere by its founder Cleo Parker Robinson.

Beyond its full-scale performance evenings, the 2021 season will feature numerous free Fringe Events including the Dancing in the Park performance in Avon, Colorado, and the interactive Dancing in the Streets performances in Vail. Educational work will take place through master classes with Festival artists, and through YouthPower365’s Celebrate the Beat dance and music education camp which is provided to local children at no cost. Lectures and locally recorded episodes of the popular podcast Conversations on Dance round out the expanding ways that Festival artists interact with the public beyond the stage.

Organizers at the Vail Valley Foundation plan to provide ticketing in tiered waves due to potential changes in capacity limitations at the Gerald R. Ford Amphitheater. The donor pre-sale will begin at the end of April, and the public on sale is currently scheduled for the end of May. The Festival will strictly adhere to all local and state public health guidelines throughout the event, and asks participants to be aware that adjustments to schedules and programming may occur, but will be communicated ahead of planned events and performances.

For more information on the Vail Dance Festival, visit vaildance.org.