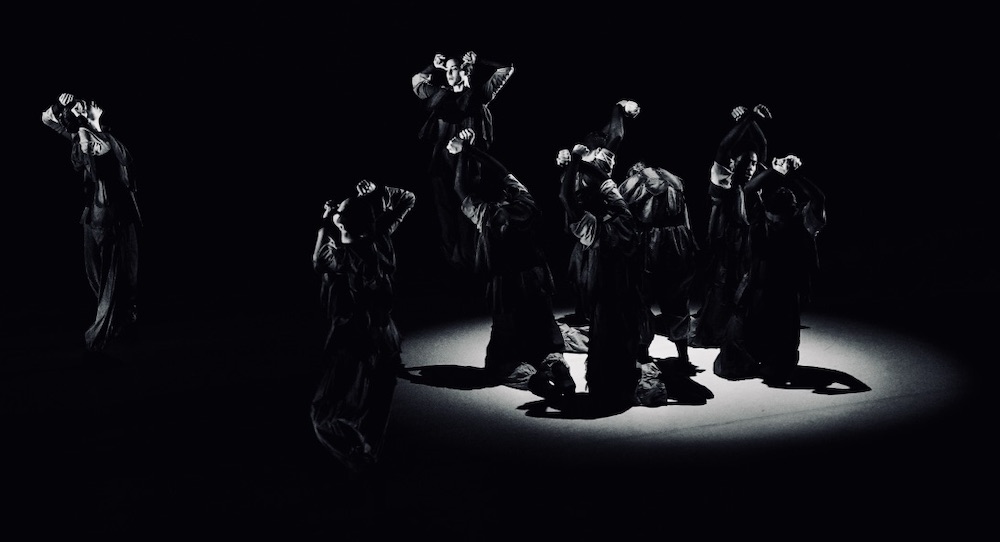 To make art and present it to an audience is taking a risk. It calls for courage. That’s often all the more the case when the work focuses on controversial issues out there in the world and in public discourse. Artists presenting such work often bring to bear conscience, commenting on the wrongs they see in the world and pushing to see them addressed. All of these considerations were in the air at Tabula Rasa Dance Theater’s Inside Our Skins, centering on mass incarceration and how it furthers a history of socioeconomic and racial injustice in this nation.

The New York City-based contemporary dance company, with Artistic Director Felipe Escalante at the helm, aims to “ignite an explosion of artistic productivity and social awakening” and “believes choreography must elicit powerful and sometimes disturbing emotions.” Inside Our Skins felt fully in line with both those points.

The second work of the night, Inside Our Skins –– Qui Pro Domina Justitia Sequitur, was the main meat of the show (on which this review will focus). The first part of the title is derived from a line of playwright Tennessee Williams: “We’re all sentenced to solitary confinement inside our own skins, for life.” One can roughly translate the second half of the title from Latin as “who prosecutes on behalf of justice”. It’s the motto of the Department of Justice within the federal government. This title is layered and meaningful, just like I would see the work is.

Its beginning was quite compelling — dancers slowly rose from a clump, and the very low lighting made it a bit puzzling for me as to what I was seeing. I did wonder if your average viewer could stay with the molasses-like pace of the movement, or if their mind would be traveling elsewhere. An inner and outer circle developed, with movement that was smooth but weighted, evoking a carrying of a heavy hardship.

A siren noise went off as two dancers in gas masks entered and moved with mysterious gestures. One dancer rose in a center spotlight as others below them moved in rippling waves through their joints. The dancer above, through risen above others, had a weightedness to their movement. That heaviness of hardship was evident. Adding to that feeling of hardship, the costumes of green/grey with raggedy frays also conveyed that sense of carrying something weighty (more inventive than stereotypical prison jumpsuits would have been).

After that section, dancers rose higher to execute strikingly beautiful movement vocabulary in a circle; long lines from legs extending backwards out through the top of the head shifted into a grounded turn and then into a higher one. There was a sense of forced confinement and sameness in this movement and structure. The sweeping, dramatic classical score fit well with that sense.

This circling section shifted into another of dancers facing back, and cyc turned to blue. A soloist came on, wearing a white unitard (a color of light and purity), moving with more sense of hope. Yet there was a feeling of control and a strictness in her demeanor and movement quality. Was she an angel of cautious optimism?

A next most memorable section was dancers moving forwards and backwards in their own sections of light, as if through prison bars. The stage picture that this choice created was powerfully evocative, and felt conceptually brilliant. Yet its effectiveness began to fade as dancers moved out of these bars of light, and thus seemed to break the idea of the image.The bars disappeared one by one, many of the dancers having already moved out of their sections of light. 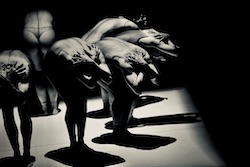 Tabula Rasa Dance Theater in ‘Inside Our Skins’. Photo by Jared Siskin/PMC.

It might have reinforced meaning more to black out the lights one by one, with the dancers still moving in the space they had been. The program notes spoke of continued mental trauma from incarceration, and the idea of moving the same way even with the bars of light gone could have perhaps helped convey that idea.

A following section seemingly featured the whole cast, moving from solos to quartets to trios — in and out of different groupings. The movement was chalk-full of technical mastery and more lifted movement. Dancers also began to shed away costume parts, particularly their tops, to reveal cream-colored unitards. The section felt long, as if becoming about the technical mastery. The question then becomes what the objective is.

Nevertheless, there was much that was visually compelling here. Such visual interest continued with a section of a dancer lifted upside down by several other dancers, and pedaling their legs, which had chains and bells on them. Shadows fell behind the group, hauntingly dancing across the back of the stage. This section also felt a bit long for the attention span of the average viewer, though some audience members could have found it beautiful in its meditative and aesthetic quality.

Before and after this section dancers faced back and moved like they were washing themselves, elbows up and to the side while their hands worked. These movements were slightly different for each dancer, and were beautiful in their intricate quality. It brought to mind the significance of simple, everyday actions and necessities, something which becomes exaggerated during and after incarceration.

In another group section following that section, dancers all began in a square. There was again a sense of confinement and sameness. They moved out of this square with more virtuosic movement — a feast of lifts, leaps, and turns that were contemporary ballet in flavor. Screams later on seemed to convey mental illness struggles. I wondered if this idea could have been delivered through the body in a way that might be more digestible to wider audiences.

The contrast between the lifted, energetic movement in and those screams also stuck out to me. I could see in this an illustration of the balance of the presence of hope in hard times. For the ending, all moved in a clump towards stage left, towards a source of light — slowly, yet not so slowly as to challenge the attention of modern audience members. There was a gorgeous continuity to the slow movement, in a lovely way of conveying a moving to light and hope.

A couple other elements in the performance are of note. First, all throughout a person sat and typed away on her phone, sometimes “selfie-ing”. This was an astute depiction of how we go on with our lives as all of these injustices within mass incarceration happen. I wondered if this clever choice might have been more successful if mirrored on other side of stage, perhaps by a male-presenting person. Second, tickets cost sixty-three cents — the average daily wage of an incarcerated person in New York City. Ticket envelopes for donations were in each program, and a message over a loudspeaker encouraged audience members to donate considering the very low ticket cost.

That was a choice aligning with the overall courage and conviction in the work, one on a controversial sociopolitical issue; Escalante and other decision-makers in the company trusted that audience members would appreciate the work and its strong message enough to give, in total, enough to cover production costs. They trusted that their message would resonate, perhaps even enough to move audience members to action. Maybe it was conscience spurring them to make work on an injustice they see out there. Perhaps there was some of both. Either way, I am glad that they did and that I could experience this multi-faceted, courageous work.