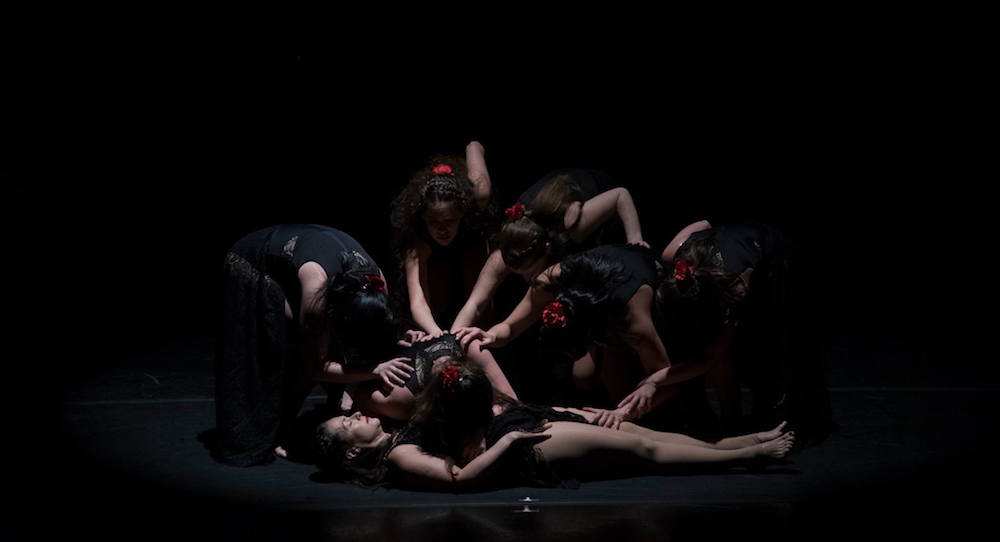 As far back in human history as we know of, we’ve danced together in communities. That’s shifted and changed along with the world at large, but the elemental truths of people moving together in space have remained. In OnStage Dance Company’s Season 15 performance, it was clear that the company is a strong community in movement. Creative diversity, as well as well-constructed ensemble work, demonstrated the fruits of community for dance art. 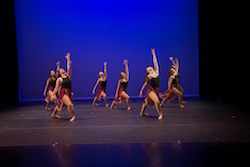 Bang Zoom, sixth in the show and choreographed by Catherine Shortliffe, was an inventive depiction of lighthearted tropical fun. The music (by Bobby McFerrin) had a breezy Afro-Carribean feel. Silky, light and plain-cut skirts and tops matched that feel. A dappled lighting pattern (from Technical Director Carter Miller) lit dancers moving in a technical vocabulary, but one pedestrian ease and nonchalance.

In one memorable section, they moved around one another in pairs and snaked through spines – a primal feel of animals at play. Lights later came down to spotlight a duet – full of spatial tension through one dancer down low, and another executing movement that swept over her. One danced off to leave another alone. She had a contemplative look as the lights faded down. The piece was full of light-heartedness, but moments like these moved into deeper, more nuanced questions of relationships with others and with ourselves.

Shake, Señora!, choreographed by Lisa Norcross, came next. A conga line formed early on, and – along with the iconic song of the piece’s namesake – it was obvious right away that the piece would be a great time. Bright colors in the costuming and lighting further signaled a joyous feel. Shoulder shimmies and bum shakes conveyed physical pride and comfort, all across the large group. Classic jazz footwork, such as pas de bourrées, “sugarfoots”, and kick-ball-changes, framed all those shimmies and shakes well. 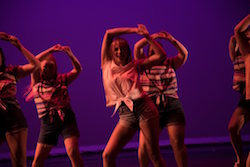 The movement was all relatively simple, crisp and clean. Virtuosity came in stage presence and consistently on-point timing. There was also a clever call-and-response section, two groups split down center stage. They all uniquely posed in center stage, facing out to the audience with pride and joy. While this ending felt less inventive than many others in the night, it did fit the work. All throughout, the joy in their bodies and spirits was so very clear.

We Come Running, choreographed by OnStage Dance Company Founder/Director Jennifer Kuhnberg, began with a blank, dark stage and voiceover of a speech from Emma Gonzalez, the now-iconic teen gun/school safety activist. Right away, I knew the work would be (at least for me) emotionally stirring. The voiceover faded and music came up, with two dancers spotlit upstage left. One put on a backpack and reached up to hug the other (taller) dancer. The intent was clear enough – a mother sending her child off to school and hugging her goodbye.

Lights came up on center stage, and a larger group of dancers with backpacks began to dance – with conviction and strength, but also wide smiles and innocent joy. Double attitude leaps and chainé turns were technical staples. Arms reaching up, over the head and down, as well as pointing fingers to the beat, were repeated gestures. These gestures could have felt immature or “kitschy” in other dances, but – in context, as well through the genuine joy within their execution – they instead added authenticity and emotional weight. 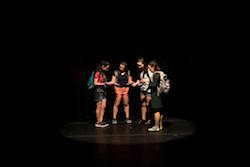 The musical lyrics (from Youngblood Hawke) were also meaningful, describing standing up in a demand for solutions – as a force to not be underestimated. “Tell me what you’re waiting for? Look across the great divide….and we come running!” The voices were also youthful. The clarity and size of the dancers’ formations (with 16 dancers in the piece) conveyed strength in numbers and overall unity. For instance, a long diagonal line in which dancers moved in crisp unison was impressive simply in its grandeur.

Toward the end of the piece, they began throwing their backpacks in a pile at centerstage. Lights came down, except for a spotlight on the backpacks. In the context of the piece, and the sociopolitical events seeming to inspire it, this was an incredibly powerful ending. The work was a model for a powerful sociopolitical message in a concise, digestible and enjoyable work. That message wasn’t Democratic or Republican, Liberal or Conservative but rather seemed to be the voice of teenage school/gun safety advocates asserting “we are here, we matter, and we will be heard.”

Also reflective of unity in message and emotion was A Brand New Day (choreographed by Tracey Roberge), a theatrical dance depiction of The Wizard of Oz. There were two Emerald City residents (dancers dressed in green), Dorothy, the Scarecrow, the Cowardly Lion and the Tinman. The Wicked Witch was present, but only at the beginning because Dorothy melted her down (as occurs in the iconic film). 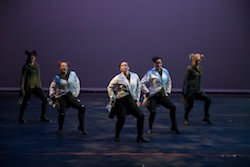 Both tap and jazz technique were present. This amalgamation brought a classic Rockette/Broadway feel of melding classic technical forms with accuracy and technical command. In that classic tap style, the dancers involved the whole body (in contrast to more footwork-focused Rhythm Tap, in a more postmodern/contemporary vein of origin and popularity). The dancers also impressively kept their tap shoes silent when walking in formations and pantomiming.

Unforgettable movements from the film also made their appearances, such as “bell kicks” (leaps with knees forming a sideways diamond and the heels meeting) and Dorothy’s heel clicks. The story the movement conveyed felt more meaningful than the movement itself, however. All rejoiced at overcoming a menacing force. Throughout, joy oozed out of their every movement and facial expression.

It also felt like an homage to the days when dancing as pure entertainment reigned – which was refreshing and somewhat unique in a show of overall inventive, forward-thinking, contemporary-leaning work. All the works had value in their own ways, and seemed to own it. A large part of this “owning it” was the company’s embracing of their dancing in community together. This feeling carried through to the end of the show, with honoring of five, ten, and fifteen years dancers as well as supportive staff. 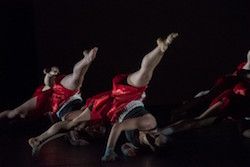 Rather than feel as if I wanted it all to finish up, I was warmed by this honoring and sharing. I felt as if audience members had a window into their community; I could imagine sharing hugs, advice, and snacks to get through late nights in the studio. If we don’t dance together, we dance alone. I personally would much rather do the former. Onstage Dance Company’s Season 15 performance show made me feel that all the more.