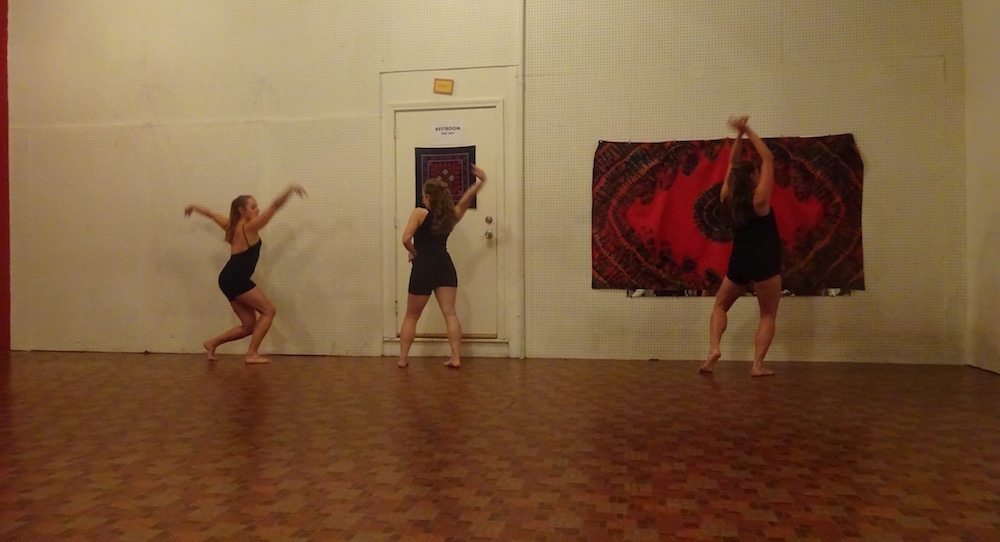 Where and when was postmodernism born? Arguably, it was more than 50 years ago in a little church basement on New York City’s Judson Street. Their movement wasn’t about pleasing an audience or anything technical. It was about letting their bodies speak their own truths.

Their legacy lived through dancemakers such as Trisha Brown and Yvonne Rainer, and on through those like Elizabeth Streb and Mark Morris. We saw a similar real, raw and truthful style in the Third Life Choreographer Series show at Third Life Studio in Somerville, Massachusetts (yes, from which the series got its name). Yet there was also multiplicity reflective of dance in 2017. 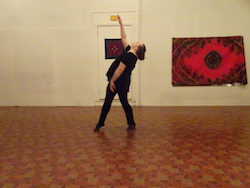 Audience members walked into a stage space (not above or below audience seating, as in a traditional proscenium stage space) with dancers stretching, chatting and marking movement phrases. It was an interesting glimpse into their performance process. No backdrop, no lighting. It could have been anyone’s living room (with a couch or two moved elsewhere, perhaps). This atmosphere felt authentic, and somehow quite comforting. There were no frills, to the point that we really could have been back in that Judson Church basement.

The series Founder and Director Kelley Donovan reminded us that we’re in 2017, however, by announcing that successful live streaming of the show to YouTube was happening. She then took the stage with a solo, “Integration of All the Invisible Forms of Radiance”, to open the show. Her movement began slow, taking her time exploring different levels and nuances. There was an element of Butoh – granted, a good deal faster but with the same quality of richness in slow speed.

She picked up speed but maintained a thoughtfulness in movement. There was spiraling, inward and outward rotation, moving through different planes – an exploration of the body’s possibilities, without kicking high or turning countless times. A few times, she released and regained balance. This might be a compelling theme to build further. In what she did offer, however, she was a graceful and strong woman moving alone in her own truth, in a costume of a simple black dress. It was more than enough, and allowed itself to be that. That was refreshing to experience.

Cambridge Dance Company followed with “Allow the Air to Pass Through”, a piece in the vein of socially conscious dance, of work from artists such as Bill T. Jones and Kyle Abraham. The concept was a depiction in dance of how difficult it can be for someone with Cystic Fibrosis to simply breath. The dancers had clearly audible breath throughout the piece, sometimes smooth and deep and at other times in panicked gasping. The quality of breath matched the movement quality, fluid with smooth breath and punctuated, frenetic with moments of gasping.

At all times, however, there was a weightedness – contrasting the almost floating ease in Donovan’s movement. This could convey the emotional weight of fear as one struggles to breathe, or when breathing is easier that the struggle may very well come again soon. In this weighted quality was powerful and clever phrasework. A motif was a hand on the shoulder of a dancer in front, and a forced arch lean back.

This conveyed a sense of struggling through uncontrollable hardships but struggling together. Also thoughtfully crafted was spacing and facings. The dancers moved and faced either sideways or diagonally. There was progress forward, but which was slow and diverted. There were so many layers of meaning and complexity in this piece, just like living with a chronic disease. Neither should be simplified, both containing far more than this review can fully reveal.

“What’s the least you can move and still be dancing?”, from the Slow Motion Dancers, returned to that classically postmodern vein. It was an intriguing exploration of pedestrian movement as dance, peppered with more technical movement. There was also live music of unique instruments and vocalizations (from Glynis Lomon).

Graceful weight shifts and extensions joined simple stepping, running and bending. There were genuinely funny moments, nuanced and clever such that words can’t accurately illustrate them. Yet there was somehow also a wonderful simplicity to them. In a hectic day and age, we could all use some humor and effective simplicity! 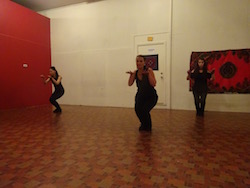 A change in tone and energy came with Honey Blonder’s “High”, the namesake of the piece’s music (Phantogram’s “High”). Blonder identifies her style as “Jazz Funk,” and this piece’s movement fit that. There were smooth weight shifts, reaches and pulls, and jazzy turns. The dancers moved mainly in unison and canon.

More exploration of non-unison, such as in manipulating phrasework to create different variations, could have made Blonder’s enjoyable, compelling movement even more of a pleasure to behold. The dancers (dressed in black costumes with styled rips) delivered the piece with punch and power. It was an invigorating energetic shift in the overall show.

On Stage Dance Company’s “Excerpts from Selichot”, choreographed by Jennifer Crowell-Kuhnberg, followed, a striking depiction of human connection in a movement duet (danced by Sandra O’Donnell and Marisa Cohen). Weight giving-and-taking, combined with grounded and easeful movement based in codified contemporary technique, ate up the stage.

In an indescribably poignant moment, one only truly felt in real time, one dancer shifted the other’s torso side-to-side with her forearms bracing her partner’s shoulders. In a gorgeous and wow-worthy lift, one dancer cartwheeled and the other held onto one of her legs. She landed smoothly, her partner still holding on. Just like the piece overall, this moment managed to speak volumes about the power of human connection in a beautifully simple way.

Evolve Dynamic’s “Cold Brew” brought this thoughtfulness and layering of nuance into something with a bit more color and energy. Dancers in tye-dye shirts began at the back wall, moving through levels and other movement dynamics. They eventually moved away from it, daring to part from its security. They had the safety of each other, however. The dancers created and shaped negative space  such that they seemed to draw and repel each other. It was almost breathtaking to behold.

Also effective was contrast of qualities, some dancers moving more quickly than others at the same time – and the same with aspects such as levels and flow (versus a more bound quality). Some moved back towards the wall at the end. Wherever they might be in the space, there was a sense that they were together (if even physically apart). The ending reinforced this idea of unity and support, an embrace of two dancers center stage.

The final piece, “We’re all dancing on a cliff together”, experimented with sound and bodies in space. It was a duet danced by Sean Thomas Boyt and Dr. Andy Thierauf of stb x at. One dancer moved Gumby-like, seemingly with no bones. His movement was momentum-driven, a turn evolving from an inwards curve or shift of a hip. The other mover provided dynamic, intriguing percussion. He used every imaginable surface, from the floors to the walls to his own body.

They moved all around the space, and together created stop-and-go dynamics. Just like a fun piece of music, there were all sorts of rhythmic dynamics to enjoy. In the scope of the show, it had something quite unique to offer, as did every other piece. In the grand scope of contemporary dance, the show was a representative microcosm of what our dance and movement can be. We can embrace and further tradition, while also shaping and pushing it into our own times. The possibilities are boundless.