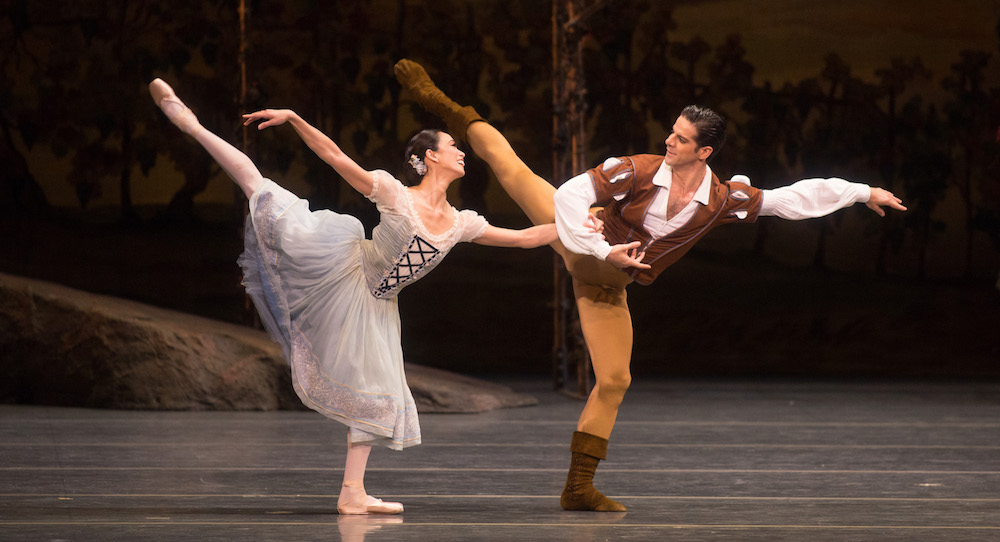 The house roared with a prolonged standing ovation. Over 170 years after its premiere, the iconic romantic ballet Giselle, performed tonight by American Ballet Theatre (ABT) in New York City’s Metropolitan Opera House, continues to delight and devastate enthusiastic audiences around the world. Giselle premiered in Paris in 1841. This first production starred internationally renowned Italian ballerina Carlotta Grisi in the title role created for her, Lucien Petipa (brother of the choreographer Marius Petipa) in the role of Albrecht who steals her heart, and French romantic ballerina Adèle Dumilâtre as Myrtha, Queen of the Wilis. They performed choreography by Jean Coralli and Jules Perrot, to an iconic score by Adolphe Adam, in what was an immediate success, due not only to the triumphant combination of star dancers, choreography and music, but also because of the wave of popularity for art that represented the common people. Following the French Revolution, theatergoers no longer wished to see so much of deities and aristocracy on the stage, and by the 1830s, the greatest hits brought populism and pointe shoes to audiences in Paris.

Giselle first reached American audiences in Boston in 1844. Almost 100 years later, the ballet premiered with ABT (then Ballet Theatre) in New York City in 1940, and they have staged six different versions over the decades since. The current Giselle performed by ABT is based on notes of the original choreography, as well as the re-staging and choreography from around the turn of the 19th century by Marius Petipa. Tonight, the eponymous character was danced by Stella Abrera, who made headlines worldwide when she reached the rank of principal in 2015, the first Filipina- American to do so at ABT. Abrera had been lauded in this role when performing it as a guest in other parts of the world well before her debut as ABT’s Giselle in 2015, a role that certainly led to her promotion, along with accolades from the press. Her devious lover was played by Marcelo Gomes, who is celebrating his 20th year performing to great acclaim with ABT, the last 15 of those years as principal dancer. 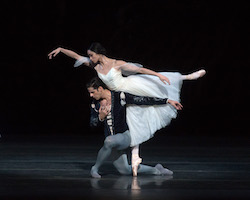 Sitting in the austere opera house, we are transported to Giselle’s rustic cottage, set under a canopy of trees with golden fall foliage. A hilly countryside stretches out far into the distance beyond. When Abrera appears as the young maiden Giselle in a light blue peasant dress, her movement is bright and effervescent. With lightning-fast piqué turns, and the complete lightness and sureness of her presence, Abrera’s Giselle is perfectly portrayed as playful and innocent. In a delicious contrast, Gomes’ Albrecht had a different type of confidence, one borne of power and partnered with a commanding presence. Simply walking on stage, he held our attention and demonstrated his elegance with strong lines and soaring jumps; no wonder Giselle noticed him!

Other characters graced the stage of course. The courtiers wore magnificent stately costumes in what appeared to be taffeta and velvet of beautiful design in rich colors. The costumes, designed by Anna Anni, were originally created for the segment of Giselle performed within the 1987 film Dancers and later used in ABT’s staging of Giselle that same year. The courtiers’ stately movement and style contrasted nicely with the simplicity of the villagers’ looks and demeanors. Attire plays an important role in defining character in multiple ways, as Albrecht also changes his in order to fool Giselle about his identity and intentions.

In Act I, we also find the Peasant Pas de Deux. This dance was not a part of the original 1841 production but was quickly added using music by Friedrich Burgmüller, and has traditionally been a beloved part of the ballet ever since. Tonight’s pas was performed by a wonderful pairing: Cassandra Trenary and Blaine Hoven. Together, they were delightful in their precision without losing graciousness in their steps. Trenary was a delight to watch, almost bird-like in her light and precise movement. (She was also literally bird-like and tremendous in her role as The Golden Cockerel in the Ratmansky ballet of the same name; her dancing, as well as that of Skylar Brandt, who also played the cockerel, being the highlight of the whole production.) Hoven demonstrated mathematical musicality and generous strength in his jumps. They were a great pleasure to see.

The scene ends in tragedy, however, when Albrecht’s true identity and betrothal to another are revealed and Giselle goes mad with his betrayal. Abrera convincingly portrayed her descent, her hair coming loose and tumbling about her just as the sureness of her love falls apart. Her frail heart cannot handle its aching or her delirium, and she dies in her mother’s despairing arms as Albrecht flees.

Act II reveals a complete transformation, both in set and in character. We find ourselves in a clearing within the dark and mysterious forest that houses Giselle’s grave, as an ethereal beauty floats across the stage, her presence dreamlike yet demanding. This commanding ghost was Myrtha, Queen of the Wilis, portrayed tonight by soloist Christine Shevchenko, whose graceful and powerful movement throughout the forest scenes appeared entirely effortless and unearthly. Her carefully crafted composure exemplified the Wilis’ merciless purpose, as she brought Giselle forth from her grave to join her army of vengeful spirits. While the Wilis have become as iconic as any sylph of the romantic ballet period, they have relatively modern origins. The ballet’s librettist Théophile Gautier discovered these spirits first described in a work of prose by German poet and essayist Heinrich Heine. As a Wili, Abrera was exquisite in her control and composure, creating a compelling and distinct contrast with her dancing from Act I that had been so full of gaîté. Abrera’s dancing so succinctly revealed a transformation from the naivete of her energetic youth and simple love to a cruelly broken and betrayed ghost of her former self, that the beauty and purity of her diminished hope and loss was palpable and devastating.

The army of Wilis in their pristine white tulle appeared to move in perfect synchrony, creating an atmosphere that was as unsettling as it was breathtaking for us who know that their unrequited love had left their unsatisfied spirits behind to exact revenge on the men who dared cross their path. Their composed facades revealed not a single note of emotion, even as they forced the honorable Hilarion, played by soloist Thomas Forster, to dance to his death for the crime of visiting the grave of Giselle. The Wilis would do the same to Albrecht, but there was still something different inside Giselle, a shred of that love she held so steadfast and unmarred. When Albrecht visits Giselle’s grave, broken by the guilt of what he had done to her and filled with remorse, the Wilis begin their work to destroy him, but Giselle breaks through their influence and prevails in protecting him with her love, which in turn frees her from their hold. The intensity between Abrera and Gomes was so great that it was easy to believe, watching them, that love could bring one back from the brink of death.

By Leigh Schanfein and Madeline Nero of Dance Informa.