Two months ago, the city of Atlanta played host to EXPOSED, the most ambitious festival of contemporary Israeli dance ever produced in the United States. The sheer scope was unprecedented: a partnership between five major institutions and organizations – Georgia State University’s Rialto Center for the Arts, Emory University’s Candler Concert Series, Kennesaw State University Departments and Dance and Theater and Performance Studies, CORE Dance, and 7 Stages Theatre – to bring over 20 Israeli artists for a six-week festival of performances, classes, workshops and creativity conversations. 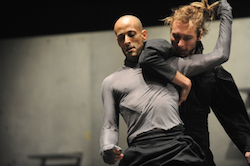 There was a time, not too long ago, when Israeli contemporary dance outside of Israel was all but defined by one man and one company: Ohad Naharin, artistic director of Batsheva Dance Company and creator of the Gaga movement language. The bold, highly virtuosic style seemed to laugh in the face of American post-modern minimalism, redefining the “rules” of contemporary dance to include, for example, lip syncing, pop music and heel stretches. It was audacious and compelling stuff, no doubt a catalyst for the growing international popularity of Israeli dance.

But Israeli choreographers have been breaking rules for decades. In the bright light of Batsheva, smaller companies can have a hard time getting global recognition. Enter the International Exposure (from which, presumably, EXPOSED got its name), an annual five-day festival held in Tel Aviv that showcases the best of Israeli contemporary dance for an audience of international presenters and journalists. Sue Shroeder, artistic director of CORE Dance in Atlanta, attended the Exposure in 2013 and came back armed with a list of companies and choreographers she thought Atlanta audiences should see. She says she was drawn to the work’s “sense of urgency and uncertainty”, as well as its political engagement and “sense of place.”

With support from the Israeli Consulate and its powerhouse Director of Cultural Affairs Yonit Stern, Shroeder put the wheels in motion and enlisted other presenters for additional resources and input. Rialto director Leslie Gordon attended the Exposure in 2010, when she discovered the Jerusalem-based company Vertigo; she brought them to Atlanta for the first time in 2014. Gordon says she loves that Vertigo, under the artistic direction of choreographer Noa Wertheim, doesn’t have the ubiquitous Batsheva look and style. Wertheim’s work, says Gordon, has an “ability to touch you deeply;” it’s “whimsical” and “theatrical without being overbearing.” For EXPOSED, Vertigo returned to the Rialto to perform Vertigo 20, a retrospective of the company’s first 20 years that combines images, music and other elements from past works. Although the work felt a bit disconnected, the dancers captivated with piercing stares and controlled yet relentless physical power.

‘Come Jump with Me’ by Yossi Berg and Oded Graf. Photo by Gadi Dagon.

In fact, many of the presenters cited fearless athleticism coupled with a near obsessive attention to detail as the most compelling elements of Israeli contemporary dance. In Come Jump With Me, one of the festival’s standout performances, dancers Yossi Berg and Olivia Court Mesa of Yossi Berg & Oded Graf Dance Theatre jumped rope in side-by-side, near-perfect unison for almost 10 minutes while discussing their concerns about the current state of Israel. Later, the captivating Mesa, who immigrated to Israel from Germany, confessed a deep love for her new country, raving about its healthy food and natural beauty while ravenously stuffing her mouth full of pink lollipops. A moment that began innocently descended into the gluttonous and grotesque, evoking a sense of impending destruction. It was an image I won’t soon forget.

Other highlights included Niv Sheinfeld and Oren Laor’s Two Room Apartment, which they performed in an informal setting for a group of Emory students, as well as a weekly workshop the duo taught at CORE’s Decatur studios. In both their classes and their work, Sheinfeld and Laor, who are longtime artistic and life partners, bring a fresh approach to performance practices. In the studio, they worked with “action” as a vehicle for communication (ultimately the goal in every kind of performance) and led exercises meant to communicate ideas through identifiable ways of moving like “blocking” or “seducing.” Shroeder, whose company performed a new work by Sheinfeld and Laor aptly titled American Playground, says their work “expands the landscape of possibility” and redefines “what is out there and how it’s made.”

Sheinfeld and Laor’s 2015 piece Cowboy, which made its American debut at 7 Stages Theatre as part of EXPOSED, used the iconography of the America cowboy as a framework to explore the nuances of queer identity. Like Come Jump With Me, one section featured an immigrant’s confessional: a monologue/solo by French-born dancer Stefan Ferry, who says he struggles to make a living in Israel. But although Cowboy raised some interesting questions, it didn’t resonate as strongly as Two Room Apartment, a fascinating duet that addressed the challenges facing partners who live and work in close proximity. 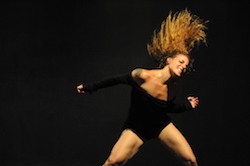 The Emory Dance Program, supported by the Candler Concert Series, presented the bulk of the festival’s most innovative work, all by artists largely unknown in the United States. In addition to presenting Yossi Berg & Oded Graf Dance Theatre, Emory commissioned a shared bill by Hillel Kogan and Anat Grigorio at the Schwartz Performing Art Center’s Dance Studio; the two also led a creativity conversation titled “The Political Body.” Kogen’s work We Love Arabs delighted audiences with a scathing political parody of the quintessential self-absorbed artist too wrapped up in his own experience to recognize his biases. Kogen summoned dancer Adi Boutrous to the stage and (quite literally) labeled him an Arab by drawing the crescent moon symbol of Islam on his forehead. (Boutrous said he was a Christian, but Kogen dismissed it). Although the work could perhaps be better described as theater, highly physical movement sections – including Boutrous’s breakdance/hip hop solo that Kogen belittled – anchored the concept and revealed disturbing parallels to racism in America.

Says Emory Dance Program faculty member Gregory Catellier, “I didn’t think there was a connection between the work of these artists and the current United States political climate until I saw the work in person. It became apparent that we are struggling with many of the same issues: walls, the ‘other’, sexism, religious fundamentalism. The one big difference is that Israeli artists are making work in an environment in which violence is palpable.” Perhaps, when urgency fuels everyday life, the art reflects that. Gordon says the work is difficult to define, but “you sense the origins.”

Although Grigorio’s solo Mr. Nice Guy sharply skewered the male-dominated dance world, it was her piece Run-in, Meaningful Coincidence – a new work she created for the Emory Dance Company students – that captured my heart. Near the end, the all-female cast whipped their hair in a seemingly endless, exhausting floor phrase; the physical difficultly alone nearly brought me to tears. Grigorio conjured feminine power in all its messy, raw sensuality. I’ve seen a lot of “feminist” dances over the years, and this was one of the first I really believed. 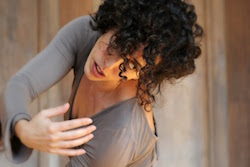 Batsheva made a brief but welcome appearance with a screening Mr. Gaga, Tomer Heymann’s fascinating documentary on the complicated Naharin. Because of the film’s limited release in the United States, I was thrilled for the opportunity to see it at Emory, and it did not disappoint. At 7 Stages, master clown and performance artist Ofir Nahari closed the festival with a showing of his amazing solo mime/physical theater piece NO(SE)ONENOWHERE. A new work for the KSU Dance Company by choreographer and artist-in-residence Ella Ben-Aharon also premiered on the last evening of EXPOSED.

Ivan Pulinkala, Chair of the Department of Dance at KSU called the festival “a feast of Israeli dance.” I’m still savoring its many surprising flavors and textures, satiated and thankful for the opportunity to experience such a wide range of artists on my home turf.