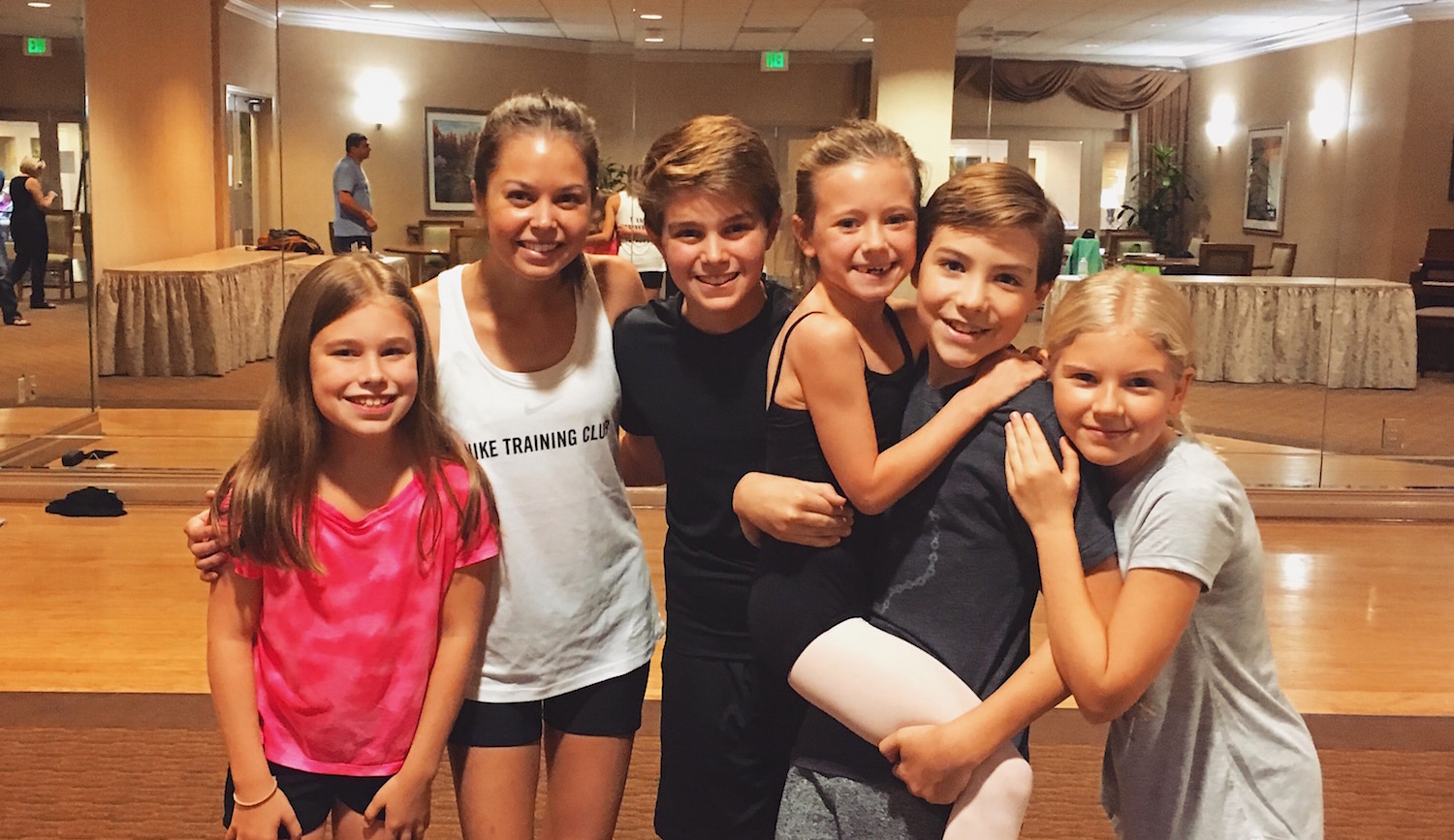 We all have habits. Habits are a part of our everyday life. We see this in everything from how a person makes her coffee, to what order he puts his clothes on. Broadway performers are no different when it comes to preparing for their performances – each forms habits, creative preferences if you will. 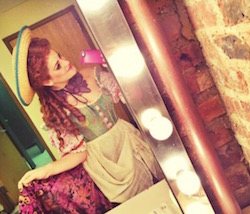 Hannah Jewel Kohn backstage on the National Tour of Disney’s ‘Beauty and the Beast’. Photo courtesy of Kohn.

When asked what pre-show habits these artists love, they mostly list physical practices. Paige Silvester, who describes herself as a “total creature of habit” when it comes to work, says she must take a dance class, go to the gym or do some kind of local fitness or yoga class. If she doesn’t, she says she becomes “overwhelmed and distracted” when she arrives at the theater. 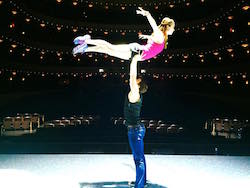 “As it gets closer to our evening call time, I warm up vocally and practice repertoire in the hotel before getting to the theater because I am shy about warming up in front of other people,” Silvester adds. “I know that if I don’t do it before getting to my dressing room, I’ll skip it all together and be mad at myself as soon as I get on stage!”

Rachel Marie Bell also enjoys getting physical before hitting the theater. “I love when I can squeeze in a heated yoga class before a show to warm up my neck, spine and hamstrings,” she says. “When we’re in smaller cities, I always make it to the gym or get to the theater early for a mix of cardio, Pilates and weight conditioning. The choreography for my track requires a lot of back-bending and high kicks in the grounded ‘dirty dancing’ numbers and a carefree grace in the social ballroom choreography, so it’s very important for me to warm up by body and my voice properly for the show.”

She also swears by the benefits of a foam roller and touts working her feet with a theraband and tennis ball. 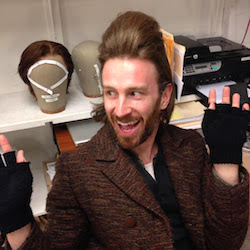 Stephen Carrasco backstage at ‘Fiddler on the Roof’ on Broadway. Photo courtesy of Carrasco.

While also mentioning good nutrition, vocal preparation and physical activity, Hannah Jewel Kohn pinpoints “mind/soul work” as necessary, too. “Traveling around the country can be very exciting, as well as challenging,” she admits. “A great deal of self-care is needed, especially when I am performing eight shows a week and traveling on my off-day!”

Kohn expounds, “My preparation for each show consists of many rituals. I start off with a full ballet barre class (I give myself), my physical therapy strengthening exercises and a vocal warm-up. After my makeup is done, I put in my earphones and sit quietly listening to a 10-20 [minute] mediation tape which helps me focus and ground myself for the show.”

Stephen Carrasco, on the other hand, says it’s important to him to have a good time – and to eat peanut M&Ms. “Plain and simple, I like to have fun,” he says. “We’re not curing cancer here at the Broadway Theater. We are playing pretend and telling a spectacular story. So when preparing to do so, I like to laugh a little. We spend three hours a night telling a story where, by the end (spoiler alert), I oppress the Jewish people. I need my castmates to know I love and respect them before I go out on that stage and hate them.”

Why These Habits are Meaningful

As a showgoer, most expect the performers in the show they’re attending to be 100 percent on their A-game. It’s clear that for all these artists, this physical, mental and emotional prep time is part of that. 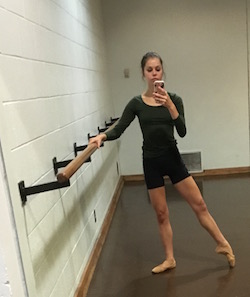 “Once I’ve warmed up physically and vocally before the show, I know I can fully commit to the choreography and intention of my character while on stage,” Bell explains. “I can trust I’ve done the necessary preparation and do my best to live in the moment while performing.”

For Kohn, her meditation technique is vital. She shares, “I discovered the importance of doing a mediation technique after I suffered a minor injury to my ankle. I realized being 100 percent present at each and every moment of the show requires a quiet mind and is absolutely necessary to focus.”

In addition to these habits being important to each of these individual performers, they are also significant to the rest of the production’s cast and staff, as pre-show habits tend to communicate more than anything else that you’re present, focused and ready.

Plus, the pre-show habits that involve others tend to be some of the best stress relievers. 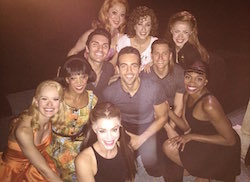 Bell perhaps pinpoints this best. “I love the camaraderie that takes place during vocal warm-up and in the female ensemble dressing room before the show,” she says. “We often have music playing as we put on our makeup and pincurl our hair in preparation for our wigs. Once half hour is called, we all focus in more on our pre-show needs.”

Silvester, who personally likes to do mental visualization right before she goes on, also notes that one of her shared habits – a secret handshake with the young actress who plays Gretl before every show – is something she enjoys.

Since he’s one of the more experienced members of his current cast, Carrasco shares that he likes to make a point of reaching out to his friends and letting them know he can help answer any questions if they need him.

“I’m basically their mother,” he says. “But I love it! So I love to have fun and laugh with them because then I’m not always some know-it-all nanny trying to tell them what they should be telling their agents. I want to be their friend and co-worker, who they trust.” 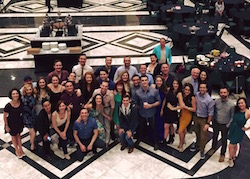 Kohn and the rest of the ‘Beauty and The Beast’ cast. Photo courtesy of Kohn.

How These Habits Affect Careers

Obviously, if you don’t take care of yourself, your personal career will suffer. But habits are also crucial because they often set a standard. That’s why these artists often make sure to teach the importance of creating good habits, and not just pre-show, when working with Broadway Connection students.

When asked how she does this — introduce students to healthy habits and encourage them to develop their own in the classroom — Bell says, “I make a point to vocally acknowledge, and I love encouraging students in class when I notice a moment when they pushed themselves. You must do the work and continue to strive for excellence of your craft in order to discover what you’re capable of.” 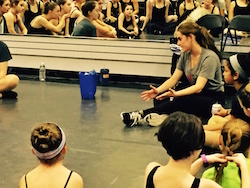 Carrasco says, “I encourage all my classes to take care of themselves. Your body is your instrument. If you treat it like crap, you will reap what you sow. You can only put your best foot forward as an artist if you take care of yourself. And that’s different for everyone. Find what works for you and run with it.”

On a similar note, Kohn says that prior to warming up, she likes to talk to them and stress the importance of being true to them. “After all, everyone else is already taken!” she recounts. “I leave them with a feeling of hope that they can be anything they want if they do their best and believe!”

In conclusion, Silvester says, “I hope to communicate and instill my belief in the importance of training, hard work and learning from your coworkers to my students. Your work as an actor is never complete – there is always something to be learned, improved upon or reexamined.”

Photo (top): Paige Silvester (second from left) teaching class to some of the kids on the National Tour of The Sound of Music with her. Photo courtesy of Silvester.