If you asked a very young Fabrice Calmels what he wanted to do when he grew up, the answer may be surprising.

“What I really wanted to do was be a pilot in the Air Force,” Calmels says.

As he dreamed about flying jets, he also attended ballet classes after school. He had no idea then that his extracurricular activity would become his passion and his profession. Now 35, Calmels is a principal dancer with the Joffrey Ballet in Chicago and, at nearly 6’7”, he holds the Guinness World Record for the tallest ballet dancer. 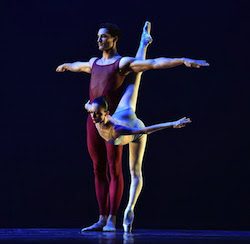 Born in Colombes, France, Calmels says his parents used to work a lot, so at age four, he began following his sister to her ballet class. His intention was to stay and watch while his parents worked, he says, but the dance instructor had other plans.

“The teacher [Murielle Maurin] didn’t have a boy,” Calmels says. “So she said to me, ‘You’ve been here a lot and watching, so you need to start taking.’”

Maurin, who owned the dance school that Calmels attended in the French town of Magnanville, saw his potential and eventually encouraged him to audition for the Ballet School of the Paris Opera. He entered the prestigious academy around age nine and says it was “a very different ballgame” from his small town school.

At 15, he fell in love with the art form and made it his mission to get into the company.

“That was my desire,” Calmels says, “and when that happens, it becomes more competitive and stressful because you understand you have one chance to perform well.”

The pressure to succeed was only part of the challenge. Calmels did well in the school. Then, around 17, he had an unexpected growth spurt.

“I took [on] almost an inch a month,” he says. “It was shocking…and it was painful. My bones grew so fast it pulled on my muscles.” There are a number of additional difficulties for dancers with that type of height gain. “Your center of gravity changes,” Calmels adds. “I started losing my technique and strength. It was stressful because it was my last year [at the Ballet School of the Paris Opera].”

He says he had to relearn how to dance.

Height: “A problem in the ballet industry”

Calmels’ ambition of landing a position with the Paris Opera Ballet did not come to fruition.

“When I didn’t get in, it was difficult mentally,” he says. “It was like my dreams fell apart. But then you have to ask yourself if you want to continue.”

Claude Bessy, who was the director of the school then, encouraged Calmels to go abroad. This led him to the Rock School in Philadelphia and then to Boston Ballet II. He says, during this time, he regained his confidence.

“I looked at my body like an engine,” Calmels says of his long frame. “I had to tune it to make it work appropriately. So I figured out all my weak spots and worked really hard to be able to compete with people half my size.”

He also acquired a curiosity for America. 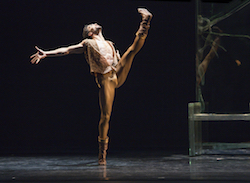 “So I auditioned everywhere,” Calmels says — including the Joffrey Ballet. The company’s co-founder, Gerald Arpino, who passed away in 2008, had no concerns about Calmels’ height and offered him a job. Calmels returned to France to audition more in Europe before accepting the offer. Then, after the attacks on the World Trade Center Twin Towers on September 11, 2001, Calmels was unable to acquire a visa. Unsure what his next ballet opportunity might be, he joined the famous French cabaret LIDO de Paris. He says it was an “awesome experience” that strengthened his partnering skills.

The dream of America and ballet was not dead, though. Calmels emailed the Joffrey Ballet a year later, in 2002, and asked to take class in Chicago. He hit an immediate roadblock; company officials informed him they had plans to downsize. He went anyway.

“At the end of the ballet class, they said, ‘It was nice to see you, but unfortunately we won’t have a position for you,’” Calmels recalls. “It felt like everything was falling apart. And at this particular moment, Arpino walked out of his office, he passed me, and was like, ‘Oh you’re here. You made it.’”

Arpino had no interest in eliminating positions and insisted Calmels receive a contract right then and there. Calmels says he had found his dancing home.

It’s not simply his height that makes him stand out

Calmels says his first big moment with Joffrey was dancing the lead in George Balanchine’s Apollo. He attributes another pivotal moment in his career to performing the title role in Lar Lubovitch’s Othello, A Dance In Three Acts, an adaptation of the Shakespearean work. Originally created for American Ballet Theatre and San Francisco Ballet in 1997, Lubovitch re-staged the piece for the Joffrey Ballet in 2009. Calmels says it was a huge challenge.

“There’s acting that’s really involved, as you have to carry a story,” Calmels says. “It’s grueling…but one of the best times I’ve ever had on stage.”

Initially drawn to Calmels’ height, look and technical abilities, Lubovitch says it was ultimately the dancer’s artistry that landed him in the role.

“Acting without words means one must capture the essence of what must be portrayed through dynamics, timing, musicality, emotional vulnerability and, above all, imagination,” Lubovitch says. “Fabrice brings all that to Othello in abundance. He’s a dancer who can speak physical poetry.”

Calmels has also been praised for his partnering skills — something former Pacific Northwest Ballet principal dancer Carla Körbes can speak to. Körbes says they first danced together four years ago when she invited him to perform at a festival in her hometown in Brazil. At the time, Körbes lived in Seattle and Calmels in Chicago.

“We met briefly before going to Brazil,” Körbes explains, “but working with him felt so natural and easy that we pulled together two pas de deuxs in about a day.”

She says it was the start of a great partnership, in which his height was advantage, not a hinderance.

“But there is more to him as well,” Körbes continues. “He is very careful and attentive as a partner. We get along so well. We always have a good time on stage together.”

“The changing face of ballet”

Calmels says that not having another exceptionally tall dancer who preceded him — someone he could look up to — was at first disheartening.

“You ask any dancer and say, ‘Who was your hero or idol?’” he says. “They always have someone who is similar to them. Someone they can follow.”

He hopes to be a source of inspiration for future generations — and not only for dancers towering over six feet, but for all young dancers frustrated with something they perceive as limitations within the field.

“You have to believe in yourself,” Calmels encourages. “I had to trust myself and do the homework.”

He says he sees an evolution of the parameters around the ideal dancer.

“Everything is always going to change, [even if] people have a hard time accepting change,” Calmels adds. “We see it’s possible that not one superior person is able to do [ballet]. Tall people can do this. People are open to see other types of dancers.”