The tap-centric, throwback to the early 30s, witty Broadway revival, Dames at Sea, opened to an energetic crowd on October 22. Centered around three women and three men, Dames at Sea is sure to make a huge splash in the musical theatre and tap world with its campy writing, comedic and talented cast, and spectacular choreography. 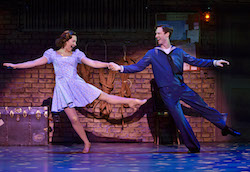 Eloise Kropp and Cary Tedder in ‘Dames at Sea’. Photo by Jeremy Daniel.

Directed and choreographed by Broadway guru Randy Skinner, Dames at Sea was fantastic and a show I would love to see again and again. I did not want the show to end. Every single number was better and better, and the smile on my face did not dissipate until hours after the show. The pace was perfect, the cast’s comedic timing was flawless, and the DANCING! Every number was so clean, and the detailed tap sounds all hit.

The casting was exactly right, and I could tell each actor truly loved performing his or her specific role. The partner tap numbers stood out to me because it’s not often choreographed and executed as well as in Dames. The cast members seemed to glide on stage – very reminiscent of a Fred and Ginger movie musical.

The coolest part about seeing Dames at Sea for me was the fact that Cary Tedder, who plays Dick in the show, is one of my oldest and dearest friends. We’ve known each other since second grade, went to high school together, and watching him on stage in Dames made my heart smile and swept all of my glooms away.

Tedder says of the show, “It’s so much fun. I feel like I’m getting paid to goof off with my fellow actors, although a lot of it is very technical. But we have the best time feeding off one another on stage.” 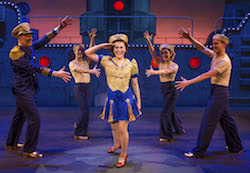 Being cast in Dames was not an easy feat, and once cast, the rehearsal schedule was that of record pace.

“They went through 700 people to cast six parts,” Tedder explains. “The whole show is magnetic and everyone cast has an ‘X-factor’, and that’s what Randy was looking for. He didn’t want to settle and try to teach someone the ‘X-factor’. We had three-and-a-half weeks of rehearsal, six days of tech. It was 16 weeks from casting to first preview. There was no time to teach the ‘X-factor’, so casting was definitely important.”

Working with Skinner is a dream for anyone in musical theatre who can tap.

“I would get frustrated with a lot of the tap steps,” Tedder says of working with Skinner. “But the good thing is that Randy trusts his actors. Some choreographers out there will change a step if you don’t get it immediately to make it easier. But Randy would say, ‘I’m going to give you the step’, and he would know it was over my head, but watch me every day get better and better.”

Some young choreographers today move on to an easier step if dancers are not embodying the more complicated movements. Because there is usually such a time crunch to mantle a show, this is an every day occurrence in the choreographic process.

“There is something to be said about someone who gives you movement that they know is out of your skill range and says, ‘Get there, I believe in you’,” Tedder says. “It wasn’t out of fear that I got the step, it was out of wanting to make [Randy] proud.” 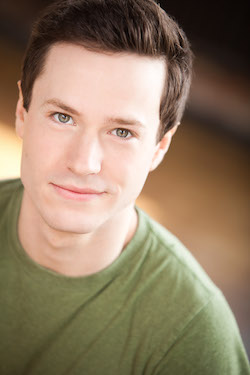 Skinner’s choreography had a little bit of everything under the musical theatre and tap umbrellas. There was hoofing, rhythm tap, classic tap, and some new exciting sounds made with a piano on stage.

“My favorite number in the show is ‘Choo-Choo Honeymoon’,” says Tedder. “It’s just the most joyous moment, and the piano tapping…it’s the number [Danny and Mara] worked the most on. My favorite number that I’m in is ‘Dames at Sea’ because there’s a chance for three guys to showcase real masculine Broadway dancing.”

For Danny Gardner, who plays Lucky and has a similar style to the late Danny Kaye, Dames at Sea is his Broadway debut.

Gardner says of the show, “I’m continually inspired and challenged by the amazing performers I work with every day. And the fact that I get to do my Broadway debut with Randy Skinner choreography is a dream come true.”

Eloise Kropp, who plays Ruby opposite Tedder, adds, “Every performer’s dream is to be able to do a show where they push their limits to be able to do everything in their arsenal. We sing, we act, and we dance. Doing that every night is a real treat.”

Dames at Sea is a real treat to watch. Tedder attributes a lot of what makes Dames such a treat and a cohesively polished production to the workshop experience and to being able put his stamp on his character from the beginning. Tedder has been a part of Dames since early 2014, when the creatives decided to revive the show.

Of the workshop experience, he says, “There is something special about getting on in the beginning and planting a seed. Workshops are the way to do it. The earlier you can get on the project, the more you can make it yours. As you see the show grow, the writers will start to write for you, instead of plugging you into a role that is already established.” 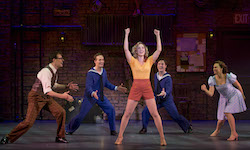 Each cast member truly embodies his/her character, and I could tell that they all love performing their role, and I loved laughing and bobbing my head to every number. I think Dames at Sea is one of the most heart-felt, goofy and fun theater experiences I’ve ever had.

If you’re going in to the Helen Hayes Theater wanting to see dramatic monologue, serious subject matter and thought-provoking themes, you’re probably not going to enjoy Dames at Sea. But if you want to laugh, smile and see some really superb dancing from some really superb actors (with sweat dripping from their forehead for 95 percent of the show), then Dames at Sea is the perfect show for you!

“To sweep your glooms away,” he says. “There is a point when Joan (played my Mara Davi) says, ‘Good times are here to stay. The glooms are very common today. There’s the empty-pocket glooms, the empty-cupboard glooms, the domestic glooms, and the foreign glooms.’ And that’s very topical because we have those same problems now. While this is a show that’s a throwback to the 30s, it rings very true today. So, if you have any type of the glooms, come sweep your glooms away with Dames at Sea.”

For more information about Cary Tedder and the cast of Dames at Sea, visit www.damesatseabroadway.com. Be sure to catch the show before it closes on January 3rd.

Photo (top): The Cast of ‘Dames at Sea’. Photo by Jeremy Daniel.