The classic musical, Fiddler on the Roof, is making its way back to the Broadway stage this year. The show, which had its original Broadway run in 1964, lasting for almost 10 years, began previews on November 20, with an official opening night scheduled for December 20, at the Broadway Theatre. This revival production has some exciting updates, including direction by Tony-winning director Bartlett Sher, choreography by Hofesh Shechter (inspired by the original choreography of Jerome Robbins), and a stellar cast.

Here, Dance Informa hears all about the revival from two members of the cast, So You Think You Can Dance’s Melanie Moore and Australian dancer-actor Reed Luplau. 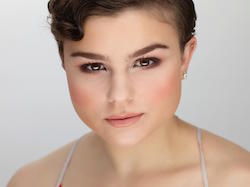 Melanie Moore, who plays Chava in ‘Fiddler on the Roof’. Photo courtesy of Moore.

How excited are you to be a part of Fiddler on the Roof on Broadway?

Melanie Moore, Chava in Fiddler on the Roof

“I am so excited for Fiddler on the Roof to be coming back to Broadway! This production feels so authentic and new, and the cast is just unbelievable! I literally have to ask myself daily if this is actually real! It feels like a dream.”

Reed Luplau, Ensemble in Fiddler on the Roof

“I am overjoyed to be a part of this new and exciting revival of Fiddler. Not only is Fiddler an American classic, but our creative team is extraordinary. For me, this couldn’t get any better. I get to experience the musical theatre side that I absolutely love, and then we get the incredible Hofesh Schecter as our choreographer.”

Did you watch Fiddler growing up?

“I remember watching Fiddler the movie as a child, but I never really got into it that much growing up in Australia. I do remember the tour that came to Australia with Topol, but I was very young. A student from my mother’s dance studio used to perform ‘If I was Rich Man’ as a song and dance for competitions. I remember being in awe of the song but also being a little confused by a 15-year-old girl dressing as a large sweaty man with a big beard. These images will never leave my mind.” 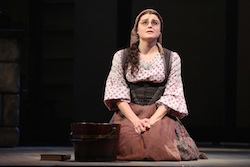 Melanie Moore plays Chava in ‘Fiddler on the Roof’. Photo by Joan Marcus.

“As a lover of show tunes, I have been exposed to the music of Fiddler on the Roof for ages. All the songs are classics! I, however, have never actually seen a production of Fiddler on stage! So the story is still quite new to me.”

Did you audition for the show, or were you called in?

“I auditioned for the dance lab of the show, and then from that was brought in to audition for Chava.”

“I remember the night so well when my agent, Sofia, called me with the breakdown for Fiddler. Sofia was so upset, as I was leaving to visit my family in Australia for two weeks the next morning. For some reason, however, when I booked my flights, I bought the flexible fare, in case I would have to change it. Somehow I knew it was going to happen, so I changed my flights and postponed my trip and stayed for the audition.

The audition for Fiddler was a very different audition for Broadway. Usually, we learn a combo for a dance call, casting will do a cut, and then people would be asked to stay and sing. The invited call for Fiddler happened over two long days. The dancers were asked to improvise across the floor so Chris Evans, Hofesh’s associate, could see how the dancers would move freely. We then learned a very energetic and rhythm-driven dance from one of Hofesh’s works. After this, some dancers were asked to come back the next day. The callback was just as intense, if not more. I was so unsure of how I was doing, but I did my best and had the absolute pleasure of learning some of Hofesh’s rep. I remember when I got the call from my agent, screaming, telling me I got the job!” 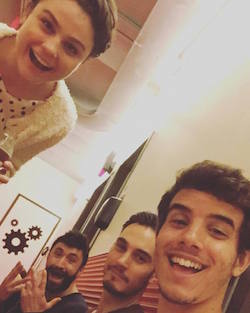 Melanie Moore and Reed Luplau with dancers from ‘Fiddler on the Roof’. Photo courtesy of Luplau.

What’s it like working with Hofesh Shechter? How would you describe the choreography?

“Working with Hofesh has been a growing experience for me. I am learning so much and can feel the way that I approach movement changing. The choreography is based off of Jerome Robbins’ original movement, but Hofesh has put his own take on it and has evolved the ideas to something very beautiful, grounded and smart.”

“First, I have to say that I am a Robbins fan and love his collection of works. Hofesh is an extremely talented man, and I love working for him. I believe he has a unique dance vocabulary that I am loving working into my body. Hofesh’s movement is not one that you can just grab a group of dancers and yell ‘5,6,7,8’ and everyone will just nail the style. Well, not usually anyway. What I admire about it is that it takes time to marinate in your body, and it’s more than just steps; it’s a different skill in the way of moving. It is a complete language that goes hand-in-hand with the theme of Fiddler.”

Do you have to dance and sing? What’s that been like?

“I do have to dance and sing. My other musical theater experience was with Finding Neverland on Broadway.”

“Thanks to my mother and Nanna, I grew up singing and dancing. I have always had a passion for musical theatre, especially after watching every Gene Kelly film.  I’ve been very fortunate in having a good career in concert dance, and I knew it was time to transition to theatre. I made a commitment to take more acting classes and, of course, singing. I have a great team of coaches behind me who have helped me progress and gain confidence in singing. It’s usual and likely that dancers dislike having to sing, but once I fell in love with singing all over again, I couldn’t wait to audition and sing for casting and directors.” 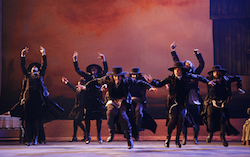 What’s your favorite scene or moment in the show?

“Don’t make me choose! We have a very talented cast in this production. I love watching the scene work come to life as Bart Sher, our director, is very heavy into the story and not just singing the songs and dancing. If you’re going to make me answer, I’d have to say right now that I love the ‘wedding’ and the ‘bottle dance’.”

“So far in our staging, my favorite scene and moment is in the inn – the scene leading up to and the song ‘To Life’. It is just so good with all the men dancing and celebrating!”

Are there any similarities or differences between this revival and the original, do you think?

“We have the same script and score! The new choreography will certainly be a difference. I think we all want to remind people why Fiddler on the Roof is such a long-standing, brilliant show while looking at it with fresh eyes and bringing it to a new generation of people.”

How is rehearsing for a Broadway show different from anything else you’ve done?

“There are so many different elements for each person to consider. There is dancing, singing, acting, staging, and then the who, what, where and why to each. It requires a lot of attention to detail and carefulness on each person’s part to tell a believable and honest story.”

“Our schedule during the creation of Fiddler is Monday to Saturday, 10am-6pm. The hours are a lot more intense than, say, a rehearsal with Lar Lubovitch, but we have time for creating a massive show like Fiddler. We are very physical every day in rehearsal, but then there are also times when we are creating scene work, which is not as demanding on the body. You have to be smart and choose when to push your body. Trust yourself, and know when to take it easy.” 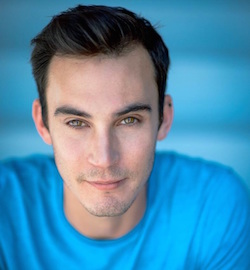 Reed Luplau, who is part of the Ensemble in the Broadway revival of ‘Fiddler on the Roof’. Photo courtesy of Luplau.

You’ll be doing eight shows a week! Are you ready? How will you prepare your body for that and maintain yourself once it’s up and running?

“I performed in an Off-Broadway show called Kung Fu, with the same eight-show schedule for three months, and when I say ‘Kung Fu’, it had a lot of combat and highly physical movement in it. I love the feeling of having the daily ritual of performing a show for a decent amount of time. I have already been icing during rehearsals and taking hot baths weekly, just to keep my body maintained during creating. The company has a physical therapist who treats us weekly, so they are looking after us very well.”

“The preview process helps a lot with getting ready for eight shows a week! By the time we open, we will all be finely tuned and ready to go! Staying in shape after we open, for me, requires class – of all different kinds – and often!”

What do you hope audience members will take away from this new production?

“I’m not quite sure yet. We are still discovering so much about the production, and it feels very new to all of us. I think we are all trying to figure out what we want people to take with them. For right now, I hope the audience takes even more love for this classic musical home with them. Also, I hope it raises questions and the audience takes a sense of gravity, necessity and consequences of change within one family.” 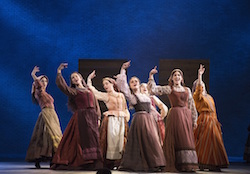 Melanie Moore (center) in ‘Fiddler on the Roof’. Photo by Joan Marcus.

“I wish for the audience to be transported on a new adventure of an old story. Fiddler is an American classic, and people have seen versions of the musical numerous times. It holds a special place in a lot of people’s hearts, and I hope we can perform a new riveting version of this Broadway tradition.”

What’s your favorite part about being involved in this Fiddler revival?

“I would have to say the cast and the creative team. To be able to work with all these incredibly talented actors, designers, director and choreographer is a great experience that I am very grateful to be a part of every day. Coming from Australia, I never thought that this would be a possibility, but I kept at it, worked hard and held my head high, even after several knockbacks. There is a place in the world for every performer.”

“My favorite part about being involved with the revival is being involved with, and learning from, this genius group of people and getting to tell this beautiful, heartbreaking story every night. And gaining a whole new family to add to my own!”

For tickets to Fiddler on the Roof, head to fiddlermusical.com.