Jim Nowakowski has always considered himself a man with a plan. But if he were to pinpoint one prevailing theme of the past year of his life, it might be “leap before you look.”

“A lot of people think that I left Houston Ballet for So You Think You Can Dance, but I actually made the choice not to sign my company contract back in February,” says the young dancer, who was, up until the first half of this year, a celebrated demi soloist with one of the top-tier ballet companies in the United States. “The last audition for the show wasn’t until March, and it happened to be on a weekend when I could go, so I thought, ‘Well, I guess I’ll put that on my list of things to do.’ That’s how it fell into place.” 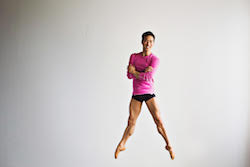 Nowakowski has built up quite the hefty to-do list for himself since his formal training began in Rochester, New York, and his decision to audition for the twelfth season of a famed televised dance competition was no more a whim than his departure from Houston Ballet. In fact, one might presume that he was headed for the screen all along.

“As a child, I was very active and a little bit theatrical,” he relates. “My mom would say that when she wanted me to sit still, she would put me in front of some kind of musical on TV. I always liked to move and imitate what I saw in terms of dancing on television, so that’s how it all started. It wasn’t until later that my love for ballet grew.”

That love took hold in the studios of the Timothy M. Draper Center for Dance Education and on stage with Rochester City Ballet, affiliated organizations that offered Nowakowski the support and inspiration he needed to rapidly advance. As a teen, he had already garnered several titles at Youth America Grand Prix and an award from the National Foundation for Advancement in the Arts (now the National YoungArts Foundation) by the time Houston Ballet approached him with a contract. 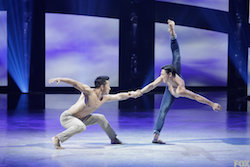 Ultimately, it was a combination of his affinity for classical technique, his innate flair for the dramatic, and sheer tenacity that led him from the first SYTYCD audition to his final performance as one of the top six finalists on the show. He still carries the sage guidance of his early coaches with him today, recalling that their positive reinforcement gave him the jumpstart he needed to pursue his dreams.

“When I was introduced to classical ballet, I really didn’t know much about it,” Nowakowski admits. “It was like this whole new world of what dance could be opened up to me. I fell in love with it. I don’t know what it was — if it was the classical music, hearing the orchestra, or the beauty of it. It was just really fascinating to me, and really challenging. I had mentors that told me, ‘You can do this. This is something you can do as a career. You just have to really work.’ When you have people encouraging you and telling you something can happen, it makes it that much more exciting for a child. You want to succeed.”

With that thought in mind, Nowakowski has already begun to consider how his artistic choices and experiences might make a similar impression on future generations. He knows that his story has the potential to kindle creative passion in aspiring dancers, and as such, he tries to write each new page with care: 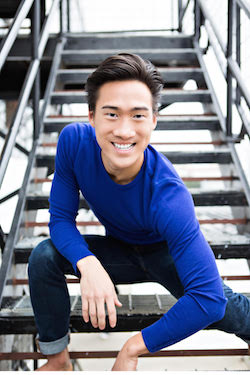 “I’ve always been someone who wanted to try a bunch of things because when I look back on my career and I’m a mentor to somebody else, I want to be able to say I know what it’s like to be in a classical company; I know what it’s like to do a television show, to dance in Europe, to be in a small company, to be on Broadway. I want to have all of those experiences under my belt so that I can be the best mentor and teacher.”

In SYTYCD, Nowakowski saw an opportunity not only to expand his repertoire, experimenting with genres he had never before dared to touch (such as hip-hop and ballroom), but also to shake himself out of his comfort zone and to test his vast capabilities. Having spent much of his final year with Houston Ballet on the sidelines due to a nasty injury, he found the process of returning to be unexpectedly arduous, both physically and mentally. True to his buoyant character, however, Nowakowski never considered giving up, instead seeking out a new challenge to help him rediscover his drive to dance.

“It’s weird to say, but the ballet world was… not draining me exactly,” he explains, “but I kind of needed a break, a fresh start. This amazing thing I got to do over the summer was like a new chapter. . . The biggest lesson I’ve learned is that you have to go in with no barriers or walls, and you have to be okay with the fact that it’s not going to be perfect. Ballet dancers are perfectionists and we normally have more time. But in a setting like So You Think You Can Dance, you just have to leave that alone, to trust and be ok with the fact that you can put everything into it — give it your all — and it’s not going to turn out exactly the way you want it to. . . It was really difficult doing so many different things that were out of my style, but that’s kind of why I wanted to tackle this new adventure.” 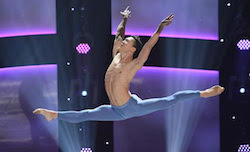 And an adventure he had, shifting gears from three-act ballets digested in two weeks to entire techniques absorbed in two days. Injury, illness, exhaustion, anxiety — Nowakowski experienced it all during his long SYTYCD run, and he feels the highest possible admiration and respect for those who made the grueling but gratifying journey with him.

“The people who go through this show, whether they get voted off first or they’re winners, I consider them all champions because it’s really challenging and the schedule is really rigorous,” he says. “When we do the live shows, what you see is, like, the fourth run-through we’ve done. I think a lot of people imagine we get up there and we have all this adrenaline because it’s the first time we’ve done it, but it’s really the fourth or fifth run we’ve done that day. And the call-time in the morning is 5:15. I’m going to take all that with me to any job I have in the future and remember that I’m stronger than I think I am.”

Even as he faced elimination in the final few weeks of the season, when the roster of performers was reduced to only four, Nowakowski knew he was walking away with a reward greater than any tangible trophy or title. 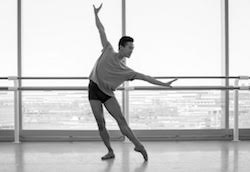 “I kind of found something within myself,” he reflects. “In interviews, the press would ask, ‘Who’s your biggest competition?’ And I was like, ‘Me. I’m doing this to prove something to myself.’ It definitely made me feel more confident. People would write me encouraging messages and all my friends would tell me they were so proud of me and that I was so brave. At first, I thought, ‘Brave? No way!’ But looking back, I am proud of myself, and it was a really brave thing.”

Nowakowski is now in the midst of a three-and-a-half-month tour with his fellow top-ten SYTYCD contestants, and though his future remains entirely up in the air, he is content to set his usual “man with a plan” mentality aside for a little while longer.

“People have asked me what my dream job is after the tour, and I have to say that I just haven’t figured it out yet,” he confesses. “I would love to move to Europe, to explore that broader dance scene, and a few agencies have reached out to me, but there’s a part of me that wants to sign with a smaller ballet company. I don’t know anything for sure yet. . . I went into this thing so optimistic and so open-minded. I didn’t know what to expect. I told myself that it wouldn’t matter when I got eliminated. I just wanted to make an impact on the season and to really inspire. I just wanted to be someone that people would remember, whether or not I won.”