Art has gone through many journeys over the centuries. At separate points, different art forms have connected and disconnected. How do different art media connect and disconnect today? What are audience members like today, Tweeting and Instagraming away, and what can we ask of them? I found myself pondering these truths and questions as I discussed the LaneCoArts upcoming December performances series with the company’s Artistic Director Lane Gifford. 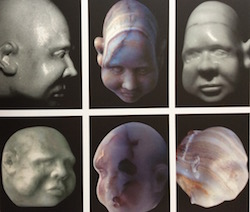 These considerations of art beyond concert dance followed from us talking about her collaborations with artists such as Mark Mennin, a sculptor whose works will be featured in these pieces. Both Gifford and Mennin (who makes many site-based sculptures) closely focus on how surrounding atmosphere affects art, and vice versa. Such partnerships are true to LaneCoArts’ mission, to “create a rich and dynamic dialogue that fuses a distinctive movement aesthetic, deep emotional exploration and stimulating visual and dramatic narrative components”.

The series, at University Settlement in New York’s Lower East Side, will include a world premiere, Dash, and two New York premieres, Striptease and Ana Deo. In a press statement, Gifford described that the works are all “built with a rigorously investigated movement style and combined with a visual component of sculptural parts, video projections, dramatic content, sound design and original music compositions”. Dash follows from a former piece from the company, The Space Between.

Lane explained how the Dash is in that “space between”, as a connector. The former piece conveyed disconnect between individuals in relationship. Dash looks toward reconnecting us – not only the dancers but also audience members with the performers and with one other. Gifford created the piece to “comment”, she describes, on changes in how we communicate in 2015.

“It’s about a problem we’re having [with communication], but I don’t want to call it a ‘problem’, because then I’m judging it”, she says.

The piece calls upon multimedia tools, such as video projections, to achieve that goal. Future plans for the work include site-based performances and theater-in-the-round presentations, to even further immerse and involve audience members in the “dance experience”, Gifford explains. 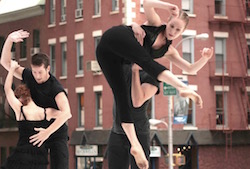 Striptease looks toward communication of another kind – with oneself. Gifford says that a poem from Poet Laureate Wyatt Baker inspired the piece. In it, a solo dancer strips down from a beautiful Baroque-style costume. The piece raises the question of “how do you get to the essence of what you are all about?” Gifford explains. It premiered in 2014 as part of the McKnight Artist Fellowship for Dancers’ SOLO Commissioning Program. Gifford was the commissioned choreographer for Dancer Fellowship Recipient Kari Mosel.

Ana Deo discusses the complexities of yet another kind of communication – between people in close relationships, particularly of the romantic kind. A trend of Indonesian wooden sculptures from the 1700s, which sensually depict men and women together, inspired the piece. Ana Deo brings these sculptures to life in dance through two men and one woman. On another level, the piece can convey that unfortunate “same old story”, Gifford states, in difficult relationships or simply in bad habits that we can’t seem to drop.

Communication with self, other, and a wider collective – LaneCoArts’ December series will delve into all of these. These are big topics, and I’m thinking about another consideration Gifford and I discussed – how much we can realistically ask of audience members when social media and other Internet use are changing the way we can (or can’t) focus. Gifford asks, “everything is so frenetic, [so] does the art form have to be?” On the other hand, she seems fully aware that she must, and truly wants to, connect with her audiences. 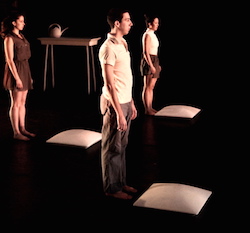 For instance, we discussed the balance between achieving a physical aesthetic in dance and conveying meaning. Lane explores the “dance language” with her company members, something that she calls “beautiful”. Through that, she seeks to “create content that [audiences] can follow”. On the other hand, she states her strong belief that “dance doesn’t mean anything until there’s a concept, there’s emotion, attached to it. … I’ve got to have a story, a narrative, that I can offer.”

Audience members of LaneCoArts December 3-5 series, at the Lower East Side’s University Settlement – including Dash, Ana Deo, and Striptease – will have narrative and dance aesthetic offered to them. Gifford wants to create a sensory atmosphere in her works, but also have audience members “walk away with some brain function, some questions”. Even just thinking about these works, I have many of them.