Tracking down choreographer Joshua Beamish is like chasing a butterfly in a windstorm. One midsummer evening, he’s at the Joyce Theater for the New York premiere of his Rouge et Noir, a work created for the Ashley Bouder Project. The next, he’s in Vancouver preparing to lead a school of young dancers through a weeklong intensive. And this after spending the first half of 2015 touring North America with Wendy Whelan, rehearsing artists of the Royal Ballet at London’s Royal Opera House, and overseeing the 10th anniversary celebration of his own Canadian troupe, MOVE: the company. But all things considered, this has been a pretty simple year for Beamish, as he related in an interview artfully interleaved between breakfast and a 10-hour day of teaching: 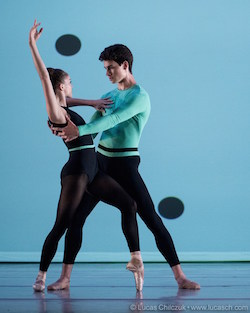 “I’m partially based in the UK now, and my only international travel outside America this year has been to England. In past years, it was more like Asia, South Africa, India, South America — I was constantly doing a lot more long-haul flights. The thing I find is that I can’t quite ground myself in any one place. In general, I have not had any time to collect myself and figure out how exhausted I really am. I’ve just been perpetually going.”

Despite the inevitable fatigue his non-stop schedule has induced, Beamish sounded more fulfilled and energized than ever when we spoke. At the time of our first conversation in 2013, the young dance-maker was in the midst of composing a duet for himself and then New York City Ballet principal Whelan as part of her inaugural independent project, Restless Creature — an endeavor that has now seen two domestic tours, garnering copious critical praise along the way. In the meantime, Beamish has established somewhat of a reputation for taking ballet dancers out of their elements, inviting them to immerse themselves in his distinctive, labyrinthine movement language for performances that often take place beyond the bounds of their current companies.

His recent program at the Joyce, one of six on the roster for the venue’s end-of-summer Ballet Festival, featured four such creations, each developed separately within the past two years on members of the Royal Winnipeg Ballet, the Royal Ballet, and American Ballet Theatre. The task of transitioning classically trained artists into the contemporary realm, of allowing them the opportunity to explore and expand their range in a supportive setting, is one that Beamish clearly relishes.

“For Surface Properties, I had these ABT dancers and I knew that I wanted to do something that was kind of more brash,” he said of his latest work, which premiered during his Joyce engagement last month. “The whole piece came from me wanting to show this company that is largely very classical in a different light. If I’d had more time with them, that’s something I’d really have wanted to push more in performance because when you’re constantly performing in an ensemble, sometimes you end up just filtering back your personality in order to be the same [as everyone else]. But the thing that interests me is all those different personalities. I’m excited for opportunities to keep working with them on showing more of themselves on stage.” 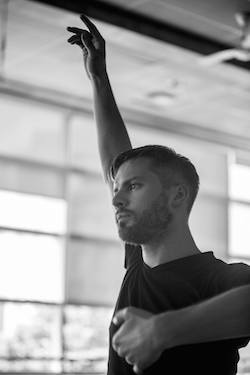 Beamish is also fascinated with the process of resetting his work on new people and admitted that it is generally as much of a learning experience for him as it is for the dancers. He doesn’t shy away from the potentially humbling act of revision, instead embracing the possibility that there might be more behind a piece than he originally intended or imagined.

“I feel like every year I know more about myself or about creation or about how to direct dancers or about how to transition work,” he reflected, “so I make little changes to things whenever I remount. The more that you can adapt a work to suit the person who’s doing it at the present time, the more successful it’s going to be because not everyone moves the same way and not all bodies are the same. It’s kind of nice to see how a work can become something else on someone else.”

Occasionally, this flexible mentality proves imperative, as when the original cast for Beamish’s duet burrow (Matthew Ball and Nicol Edmonds of the Royal Ballet) was waylaid in transit to New York for the Joyce performances. Tasked with finding two dancers willing to step into and capable of absorbing his choreography within the space of only a few days, he swiftly enlisted ABT member Jose Sebastian and Matthew Dibble, a Royal Ballet alum and long-time Twyla Tharp collaborator. Beamish recalled the incident with a chuckle, acknowledging his good fortune in having a strong network of talented, adventurous friends to call on in desperate moments.

“I knew Jose could pick up my choreography because he’d been working in my movement for two weeks. His brain was already in it. And Matt is a really good friend, somebody who cared about me enough to spend every waking minute of his weekend trying to learn this piece,” he shared. “They’re such an odd couple. You look at them and you’d probably never think of putting them together. Matthew and Nicol are very different from Matt and Jose, so it was a really good learning experience for me, to try to define what my work is. Is it the details? Is it the specific steps? Or is it the way you feel when you’re watching it? And if so, how can I preserve that feeling even if the dancers don’t have time to explore all of the individual details? It was quite a process to go through over three days.” 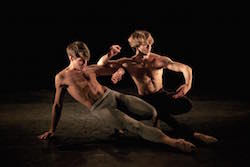 As for determining the when, where, and why of launching a project, Beamish keeps an open mind and is constantly on the lookout for the “new information” that every fresh artistic relationship has the capacity to provide. But as prospects continue to multiply with his ever-heightening profile, he has become increasingly wary of overextending himself or falling into the trap of obligation.

“I’m definitely conscious of not taking on too many creations so that I don’t burn out. Every piece I’ve made is something that I’ve wanted to make,” he asserted. “I’m not quite at the point where the demand has outweighed my ability to meet it, and I’ve made conscious efforts to try to maintain that as an objective of my career. I only want to be creating work that I have an interest in creating. I would never want to be resentful of a commission.”

Perpetuating this positive ethos means not only selecting the right projects, but also singling out the right artists to take them on. Commitment, Beamish has found, is far more vital than prestige or pedigree.

“It’s not about the name of the company or the scale of the company. It’s more about the artists within that company and how much time they want to invest in doing something well,” he said. “The National Ballet of Mexico just did my work in Vail, and I ended up having to video rehearse the entire process of teaching these dancers my vocabulary. At first, it was a little terrifying, but they totally devoted themselves to it. I feel that dedication with the Royal Ballet dancers, too. I can trust that when they go on stage, they’re going to do justice to my work because they want to. They’ll commit themselves wholeheartedly to it.” 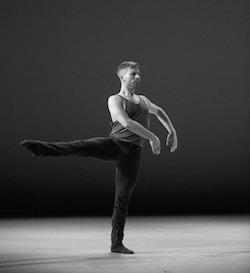 Given the high expectations Beamish sets for himself and the level of dedication — or perhaps more accurately, indefatigable grit — the pursuit of his passion has required, it’s no small wonder that he gravitates toward and encourages similar attributes in others. When asked what guidance he might supply to young choreographers hoping to find a foothold in his industry, he stressed the necessity of upholding personal integrity while still respecting the system upon which they will inevitably rely.

“Everything is so much more political than you ever imagine it could be,” he stated frankly. “It’s so competitive and there are so few opportunities. As such, the best thing you can do is put yourself in a situation where you have an institution or something behind you that benefits from your doing well. Follow the path of being a dancer, even if only for a little while [because] if you’re the only person pushing for you, then you’re constantly fighting an uphill battle. That’s the struggle that I’ve faced: That I’m always on the outside knocking on the door saying, ‘Hey let me in, let me work with your dancers. I have a unique perspective to offer you.’ Of course, I wouldn’t have the voice that I have as a choreographer if I hadn’t come from the outside. It’s kind of a double-edged sword. You have to play the game and follow the system, but also stay true to yourself and constantly inform yourself by remaining open to as many different avenues as possible.”

For more on Beamish, his company, and his latest projects, visit joshuabeamish.com.