Most artists, by the time they’re 23, are just beginning to discern the direction in which they want to head, or path they want to take. Emerging choreographer Andrew Winghart is not one of those artists. He has a clear path, a sure vision, and a strong work ethic. He has known since an early age that he was meant to be a choreographer.

“I don’t remember a time when I didn’t want to be choreographing,” Winghart says. He even remembers wanting to be a choreographer as young as elementary school. “When I was 6 or 7, I would go into my parent’s room and choreograph one-person, elaborate shows, all my own original choreography… which I’m sure was horrific,” he says, laughing.

Growing up in the competition world, Winghart was exposed to dance and choreography from many different artists at an early age. He learned from and was influenced by many different people, including Mia Michaels, Mandy Moore, Travis Wall and the ever-evolving Sonya Tayeh. With inspirations like this, it’s no wonder Winghart wanted to be a choreographer.

Taking class from those amazing artists fueled his desire to choreograph, unlike some of his peers who became dancers. He says, “I never wanted to be a dancer. I just wanted to choreograph.” Seeing this desire, Winghart’s studio director let him choreograph small groups for his dance studio’s competition team when he was just a junior and senior in high school.

From this, JUMP Dance Convention took notice, and Winghart began working for JUMP backstage and teaching some Friday night master classes as a sophomore in college. Throughout college, Winghart worked about 15 cities annually for JUMP.

After graduating from the University of Southern California, where he received a full academic scholarship, Winghart worked his way up at JUMP, and this past year was his first year working for JUMP full-time. At the time of this interview, Winghart stated that this was his 26th city with JUMP this year. 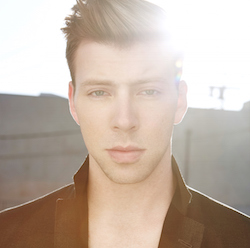 While working full-time with JUMP, Winghart premiered his first full-length work, Emergence. He says, “I thought of it as my thesis project. My goal was to see what I could produce with the smallest budget in the shortest time frame possible.” This “thesis project” is truly a sight to see. With clean and structured choreography, Emergence is the product of Winghart’s hard work and ingenuity. Similar to the Rockettes, Winghart plans ahead with diagrams. He says, “I have elaborate staging plans… I have these diagrams with different colors.”

You can watch all five parts of Emergence on YouTube, (Watch Part III below) and through the internet and apps like Instagram, Winghart is gaining a steady following. His Instagram following has exploded in the last year from 2,000 to 20,000. Through all of this, Winghart stays quite humble, wanting his work to shine, not his personal life. He says, “I don’t post pictures of myself. I don’t want to be known for my persona… I want people to think, ‘Oh, he makes really great work.’”

This great work he speaks of is truly inspiring. What makes the work even more impressive is that Winghart backs all of the funding himself. “I finance all of my own work, and I always pay my dancers,” he states. While it can sometimes be a struggle to finance his artistry, Winghart focuses on creating quality work and focuses less on getting jobs. He says, “I have found that the more I concentrate on making my work the best it can be, the more attention I get for it.”

When asked what art or work is in his near future, Winghart says, “This past year I focused on establishing and refining my voice. This coming year I want to focus on making more work.”

Winghart is not just about the diagrams and color-coordinated staging though. He explains, “I want to make dance that people feel connected to and feel a part of. At the end of the day, it’s not about the steps; it’s about that fleeting transcendent moment shared between the dancers and the audience.” 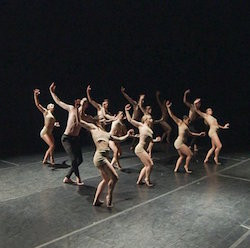 This summer, Winghart is set to debut a new 25-minute work entitled Loud Places. Winghart tells a bit about the theme of his new work stating, “[Loud Places] is inspired by coming to terms with things that have happened in the past, and how you deal with it, and how you make it something positive in your life, and how that’s where the real beauty in your life comes from.” With plans to be set over the course of seven days, Loud Places is debuting in L.A. at the end of July.

At only 23, Winghart has already distinguished himself as a top choreographer to work with and dance for. You can catch him at Edge in L.A. teaching a class, at JUMP throughout the year, or at DancerPalooza later this month.  He is also a finalist in the Capezio A.C.E. Awards to be held at Dance Teacher Summit in late July. And maybe in the future we will see his work on a national tour stage. “I’d love to choreograph and creatively direct for tours,” he says. And he’d love to keep making work for live audiences. He emphasizes, “There’s something unreplicable about watching dance live.”

However, Winghart is not set on one thing for his future. He states, “I’d like to keep exploring the art form and see where it can take me. It’s hard for me. I’m very much a planner, so it’s scary for me not to have a five-year plan. I change my mind a lot on what the next step is. But I’m trying to just keep taking steps, that’s all I can really do.”

One thing’s for sure. Winghart is definitely taking the right steps to remind us all that there is no age to true artistry.

You can see past works, learn more about ‘Loud Places’ and read about Andrew Winghart at www.andrewwinghart.com/upcoming.