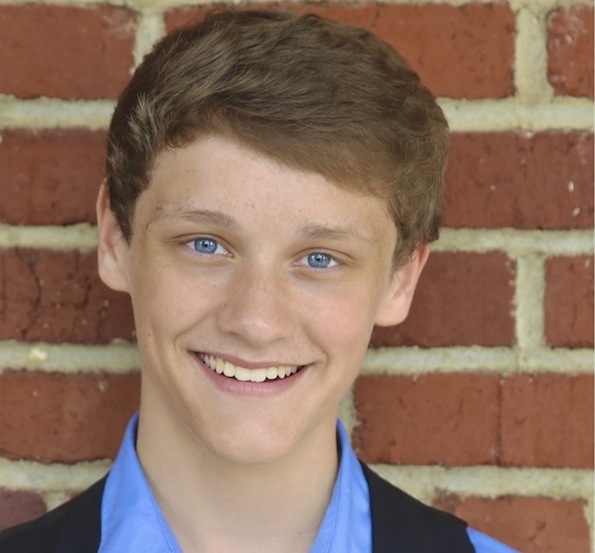 Newsies is fresh off Broadway and touring the U.S. This Disney stage musical tells the real-life story of New York City’s Newsboys Strike of 1899. The production won two Tony Awards in 2012 for Best Choreography and Best Score and is absolutely full of song and dance.

Dance Informa spoke with Ben Cook (playing Race) from the cast of the show. Ben celebrated his 17th birthday the day before our conversation, but don’t let his age fool you. He’s a seasoned Broadway performer who is clearly living his dreams. Ben shares a little about his background, how he manages being a youth performer and his favorite aspects of Newsies on tour.

Do you have a favorite song or choreographic piece in the show?

“My favorite song in the show is ‘The World Will Know’ because it’s when the kids go on strike. It’s such a powerful song and it’s very emotional in terms in of all of us banding together. It’s so great!

In a choreographic sense, I personally love the finale and the curtain call of the show. Since we all have major dance backgrounds, we get to go off and do our strengths. We turn, leap and flip and get all our energy out at the end of the show. It’s so exciting. You get to see every individual person dance and do their strengths.

I think this show pertains to any age range and any type of person. Newsies is a feel-good show. It’s entertaining and good for the entire family. If you get the chance to see it, go for it – it’s an incredible show to see.” 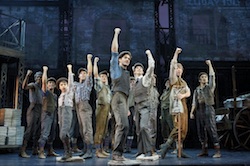 Ben Cook performs in the ‘Newsies’ strike scene to the left of Jack Kelly (center front) with the vest on. Photo by Deen van Meer, courtesy of Disney.

Did you begin training as a triple threat or, rather, did you begin with a particular interest and diversify?

“I got into dancing around the age of 9 years old and mainly because of my sisters. I didn’t love it at first but then I eventually just fell in love with becoming a dancer. From there, my dance teacher was helpful and nice enough to be like, ‘Hey, I think you are a great kid and I’d love you to look into branching out into some acting.’ She’s the one who convinced me to audition for an agent and start taking voice lessons so I could train as a triple threat. From there, I kicked off with theater in the D.C. area when I was around 9 or 10 years old. Then, when I was 11, I went to New York to do Ragtime on Broadway. I am so very grateful for every opportunity.”

You are 17 years old and have already experienced success in various venues. How do you balance the physical changes of a maturing physique with being cast as a character of a particular age?

“For Billy Elliot, I was 12 when I started doing it on Broadway and I started in the ensemble. I wasn’t growing a whole lot back then. In terms of the show, it was great because I was able to stay in the show a good amount of time. When I was about 14 or 15 I started growing a lot. And, I was lucky in Billy because they were really great about changing keys if [the score] became too high because of your voice changing. Also, if your body was changing and didn’t feel so great, they were willing to change some choreographic things to make you feel comfortable doing the work every night. Of course, after a while you just get too old. We all know we’ll grow out of the role sooner or later. It’s like that for kids in any show who are around that age.” 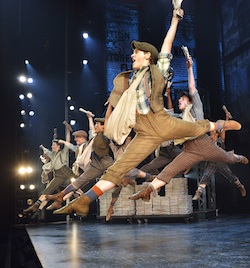 This is the first tour of Newsies after its close from Broadway. What’s different about the touring show?

“There are obviously a few little changes here and there. But, aside from very minor changes, this is the same production that was on Broadway.

We are very lucky to have some incredible lighting designers and set designers who were able to make everything compatible for the road. We have a huge set – it’s about five thousand pounds! – and we’re lucky enough to have crews who assemble it on every travel day. It’s nine trucks!

Also, there is a new song in the show that’s been made public. It’s a great song. It’s in Act II and has gotten some positive feedback. Other than that, you will see the same production that was on Broadway.” [See more on this new song here: variety.com/2014]

How do you keep up with your schoolwork while on the road?

“We have two little kids in the show who are 9 and 10 years old and we have a tutor who tours with us. When I did the tour of Billy Elliot, she was my tutor. Now I am actually doing an online program. Since I’m from the D.C. area originally, I’m doing an online program based out of Northern Virginia. It pertains to kids who are into sports or very into their craft and may be working already. It gives them the leeway to work but also keep up with their schoolwork and course credits. It’s tough because you have to find your motivation [to study] after doing your show or many hours of rehearsal. It can be a tough process. For example, right now, I’m at the theater and I was doing a little schoolwork before talking with you.”

How much did you study the Newsboys Strike of 1899 in preparation for your role?

“We learned a lot at the beginning of the rehearsal process. We sat down with Jeff Calhoun, our director, and our costume designer Jess Goldstein and talked through what life was like for these boys and why they did what they did. I was lucky enough that my Newsies character, whose name is Race, is actually based off a real newsboy named Racetrack Higgins. I had Google at my disposal and was able to learn details about him, like how the character has a cigar running at all times.”

Ben Cook (second from the left with a cigar in his mouth) does a toe touch with ‘Newsies’ cast. Photo by Deen van Meer, courtesy of Disney.

What are some health and fitness tips you could share about performing in a touring show?

“Be sure that you are eating well. And I don’t necessarily mean only greens and vegetables all the time. Be sure you eat a lot of protein and carbs. Before the show, I actually like to eat pasta. We are dancing so much the body just burns it all off and that gives it the right amount of energy. Also, drink a lot of water. That is the best thing I can say. Stay hydrated and energized.”

What’s your favorite aspect of being on tour with this Newsies cast?

“This is such an incredible group of people. I don’t know if it’s the show or what it is exactly. It’s such a brotherly type show. All the guys and women in the cast are a huge family. We just love each other. We’re all just so honored to be part of a show that’s so incredible. So, getting to share the stage together with each other every night makes us realize just how lucky we are to be here. We’re one big happy family on the road. It’s the best of both worlds. Everyone is so incredibly talented but they are also such sweet people. It’s great professionally and socially.”

Locate your closest tour venue for Newsies at www.newsiesthemusical.com.