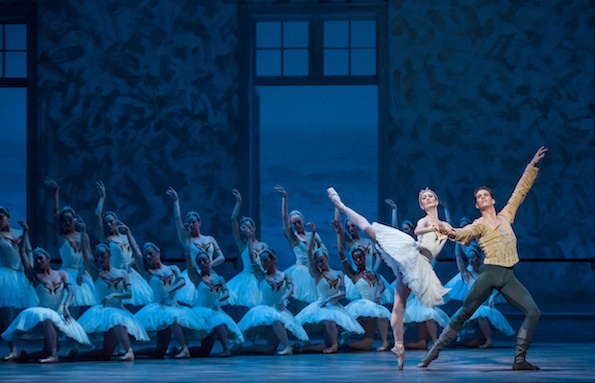 Celebrating 20 years in Chicago, Joffrey Ballet recently premiered Christopher Wheeldon’s Swan Lake, bringing the opulent $1.5 million production to the Windy City for the first time. This was also the first time that the Joffrey, a premier American ballet company, has performed Swan Lake in its almost 60-year history! It was certainly a pleasure to witness, as well as to see how Artistic Director Ashley Wheater is continuing to bring new, re-imagined story-ballets to the great “Second City.”

At the Saturday evening performance, delicate and long-limbed 11-year company member Victoria Jaiani danced the Odette/Odile lead role beside the noble and regal Prince Siegfried danced by Dylan Gutierrez, who has only been with the company five years after transferring from San Francisco Ballet. The two expertly delivered Wheeldon’s newly envisioned version of Swan Lake, capitalizing on the characters’ naivety and later their despair.

Wheeldon’s Swan Lake is in no way the classic you might remember though. The iconic ballet has been manipulated into something fresh and new with a plot twist that both deepens and complicates the already mystifying (and frustrating) thematic elements. Simply put, Wheeldon places a ballet within a ballet, presenting a dance company that is performing the very classical Swan Lake the audience thought they came to see, with the ensemble meanwhile playing out its own Swan Lake in the ensemble’s everyday dramas. 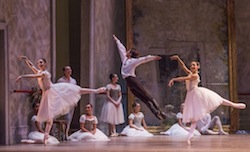 Wheeldon, who sets Act I and III not in a royal court but in an everyday dance studio, has the dance company rehearsing Swan Lake. Here, Prince Siegfried isn’t a bored aristocrat but the star male dancer, and Von Rothbart is not the shabby sorcerer who binds swans but a wealthy, ill-intentioned patron. Odette is a budding dancer who catches Von Rothbart’s eye to Siegfried’s disapproval.

As an Artistic Associate of The Royal Ballet in London and one of the most sought-after choreographers in ballet today, Wheeldon initially created his Swan Lake for the Pennsylvania Ballet’s 40th anniversary in 2004. He set his rendition in the 19th-century Paris Opera Ballet at the time when Tchaikovsky was actually composing Swan Lake in Moscow and when a young impressionist painter named Edgar Degas was on the rise in Paris.

It’s evident in many ways that Degas influenced Wheeldon’s choreography, with Act I serving as one example. Art enthusiasts can spot how he pulls upon familiar poses from Degas’ ballerinas collection as the dancers warm up.

A ballet in four acts, Wheeldon’s Swan Lake is constantly transforming itself and morphing into something new; the journeys between “reality” and performance are hazy at times and often blur the lines of which characters’ perspective we are seeing. In some ways, the production makes you wonder if this is how professional ballet dancers feel in real life. Are they constantly drifting between reality and fantasy? Do they sometimes forget where the performance ends and actuality begins? Do they find themselves slipping so deep into their characters that they become them in some ways? Of course, this obsessive tendency is not new in ballet, but in Wheeldon’s Swan Lake it takes on a new air of sensitivity and melancholy. 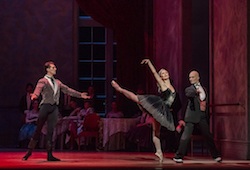 Yet, even in the midst of his remodeling of Lev Ivanov and Marius Petipa’s original choreography, Wheeldon did not sacrifice the famous scenes one expects to see, like the perfectly synced four swans in the “danse des petits cygnes” (“Dance of the Little Swans.”) This is wise as ballet enthusiasts can only take so much innovation at any one time in good measure.

In the end, this mixed up and multi-layered storyline is definitely not the best choice for a new-to-the-ballet attendee, as it takes someone very familiar with Swan Lake to follow the transitions between the fictional company’s reality and the foggy cloudland where Siegfried’s dreamscape resides. Throughout the production, Wheeldon investigates ideas of fantasy, delusion and transformation, juxtaposing both time, setting and characters “to reveal a new way to see this classic fairytale ballet.” To his benefit, the clean set design and skillfully lit stage helps more obviously shift between reality and fantasy, as does the magnificent costumes by Jean-Marc Puissant.

Still, even with the slightly confusing transitions, Joffrey’s execution of Swan Lake is undeniably gorgeous and irrefutably breathtaking, even in the unexpected. Besides Gutierrez and Jaiani, the other attention-grabbing dancers of the evening were Fabrice Calmels as Von Rothbart and Amanda Assucena and Jeraldine Mendoza in the Act III Pas de Quatre. Also, a special ovation to the Chicago Philharmonic Orchestra, who made the music truly come alive.