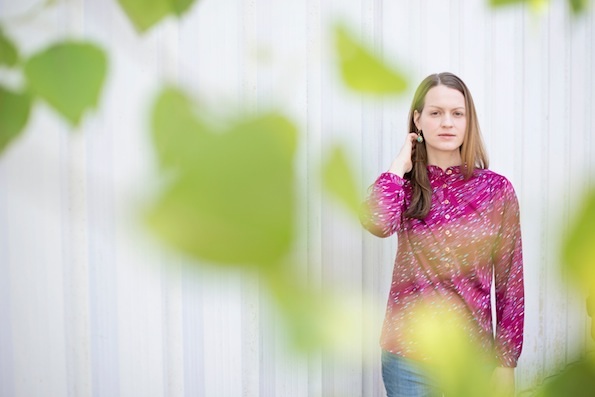 Atlanta choreographer Blake Beckham grew up like many little girls – dancing around her home and enthusiastically attending dance class in her hometown of Miami. However, she never thought she’d actually be a professional dancer, much less a choreographer. After all, that’s just a childhood fantasy, right?

Yet today, Beckham is the Co-Artistic Director of The Lucky Penny, a non-profit arts organization that serves as a production outlet for her choreography, a platform for presenting other contemporary artists, and a managing body for the portable performance venue, Dance Truck.

For years Beckham has been a strong voice on the Atlanta dance scene, and now she is producing another original evening-length work that she hopes will expand her reach nationwide. The work, entitled Dearly Departures, will premiere at DramaTech Theater at Georgia Tech on July 24-August 3.

Beckham recently shared her vision for the work over a cup of coffee at the Cafe at Cakes and Ale in Decatur, a trendy community right outside Atlanta. While the rain fell against the café’s windows, she divulged her inspiration for the piece, what nourishes her choreographic process, how she’ll use her time during her upcoming residency in Portland, and what her goals are for the next season in life.

So Blake, let’s start by talking about your inspiration for Dearly Departures. What was the work’s inception?

“A lot of times for me, when I start a new project, it begins with a specific, singular visual image. That typically becomes the point of departure for a lengthy process of research that leads me into new places and different layers.

For this particular piece, it began with a very specific image, which is a departure board, like the kind you would find in a space dedicated to travel, whether an airport terminal or a train station.

Specifically, I became really fascinated with these old signs that you rarely see anymore. They’re called split-flap boards. You can imagine the old board’s that scroll through each letter that make that distinctive clattering sound; that’s what these are. There is one left in the Philly train station, but they are mostly outdated now. I became very interested in imagery around spaces of travel and transit, specifically this kind of board. So we’re building one for this work. That will be one of the conceptual anchors of the work and also one of the technical challenges as we build our own.” 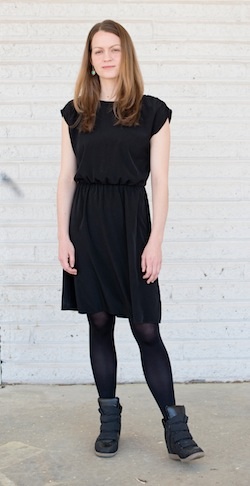 Who will collaborate with you on the work?

“It’s a work that I’m creating with a cast of five amazing dancers. I really can’t even say enough about who they are and all that they do for me and how they nourish my creative process. They are super human, amazing people…

[For the split-flap board,] I’m working with an amazing team of people who are figuring out how to make this thing from scratch. It’s mechanical engineering, industrial design and electro mechanics all in one. It relies upon a whole new skillset and therefore, has been drawing a whole new community of people to our creative process to solve problems and create this piece of scenery – although, in my mind it’s way more than just a piece of scenery. It’s also a visual art installation in and of itself, and it’s also a sound installation. It’s going to be very loud. I have enjoyed talking about this with Paul Kayhart, who is going to be the composer for the evening. The presence of the sign is definitely influencing the sound environment that we’re creating.”

Who are the dancers that you are working with? Are they dancers you’ve worked with in the past?

“I don’t maintain a regular company in the traditional sense. I cast my dancers on a project-to-project basis. For this project, three of the dancers are dancers I’ve worked with in the past. Two are brand new. The dancers are Claire Molla, Alisa Mittin, Alex Abarca, Erik Thurmond and Anna Bracewell. It is such a gift to work with them.”

How would you describe the work?

“I’ve been describing the piece as a meditation on distance and leaving and loss. It’s centered around spaces of transition inspired by these places of transit. I’ve been working with the imagery of transit and also the imagery around the various modes of communication.

For me, looking at the board itself and seeing how it switches, connects to this idea of the switchboard and people trying to communicate across distances. So there is a lot in the sound environment that relates to telecommunications, like dial tones and busy signals. It’s a motorized, abstract landscape that is reminding you of connection and transportation.”

What should audiences expect in terms of choreography and physical movement?

Would you say contact improvisation is the main source behind what will be seen in the final work?

“There is a lot of contact improv work in the piece so far. I think we’re exploring a state of being as isolation as well as about making contact…I’m also interested in the two very different states of being, being present and being present but not fully there. A lot of times when people experience loss, they can feel a sense of disembodiment, like they have to detach in order to cope. So we’ve been exploring in our bodies the feelings of isolation vs. full disembodiment, and then later how you reenter the present. That’s interesting to me as well.”

Other than Dearly Departures, what other projects are you working on right now?

“In terms of choreographing, this is my sole focus right now. But the Lucky Penny has several things going on. In the month of June, we are very excited to be collaborating with Emory [University]. We’ll be in residence at Emory for a program they call ‘Breaking Ground’ for two weeks. Basically, Emory extended this opportunity to us to curate two weeks of activities. So I will use some of the studio time myself to work on Dearly Departures. Then we’ve also invited Corian Ellisor, a local choreographer, to also benefit from studio time to develop a new project. 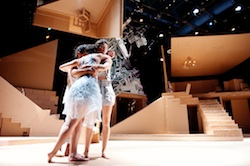 We’ve also invited some out-of-town artists named Melissa Krodman and Kelly Bond. While they’re here, we’re going to give them time in residence to work on their new piece as well as free performances of their work called Colony, a duet they’ve been touring successfully over the last year. We’re really excited that The Lucky Penny gets to present this work and offer it for free to audiences. I think it’s going to be really special and memorable.

Then in September, I’m going to be in Portland, Oregon. I’m thrilled to have a change of scenery and to be refreshed in a new environment, to just be reinvigorated. I’ll be at Performance Works NorthWest. Right now, what I think I’m going to do is take Dearly Departures and figure out what’s next for that material. After having premiered the full evening-length work in Atlanta, I’ll probably use that time to re-access and reenter the work. Then I’ll ask myself some questions about it, like ‘If I was to create a shorter version, what would that look like?’ Also, if I was to chop it up into episodes, what would that look like?’ I’ll also look at what the teaching applications are of this material; if I was to break it down for a workshop, what that would look like?

My ultimate goal is to come away with a more portable version of Dearly Departures that I could tour in 2015. The last couple of years I’ve been making these really large and unrepeatable projects that there was no way of touring. While they were great, I think what’s next for me is being able to share my work with more communities. So with Dearly Departures, I am being very intentional.”

Congrats on winning the 2013 Tanne Foundation Award! What was that like?

“I burst into tears when I found out. Actually, both that award and the Robert Rauschenberg award came as a surprise. These were awards I was nominated for and didn’t apply for, so it was surprising and game changing for me. It was really empowering.

After my work Threshold, which was so large in scale and rigorous, I was so drained. I was mutually grateful and depleted. I was really at a place of questioning my sustainability as a choreographer, thinking, ‘God, this work takes so much out of me! Can I keep doing this?’ I was kind of in a dark and confused place and then these awards came. It was like a little angel jumped on my shoulder and said, ‘Keep going!’ Aside from the financial resources, it is just so meaningful to have the encouragement.”