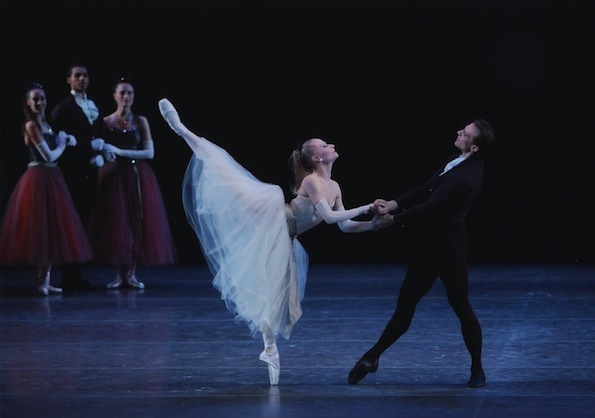 All four of these Principal Dancers joined the company during the 1990s as members of the corps de ballet, and have performed countless roles by numerous choreographers during careers spanning from 15 to 24 years with New York City Ballet.

Jenifer Ringer will give her final performance on Sunday, February 9 at 3 p.m. performing in Jerome Robbins’ Dances at a Gathering and George Balanchine’s Union Jack.

“I am so grateful to have had this career—what a gift that I have been able to dance for a living for 24 years,” she said. “There is nothing like the feeling of being out on stage, after all of the rehearsal and repetition, finally free to release the emotions generated by that ballet, that music and that performance with that particular audience. We share something unique in a specific moment in time and then it is gone like a puff of smoke. But we all experienced it, differently perhaps, but yet still the same.” 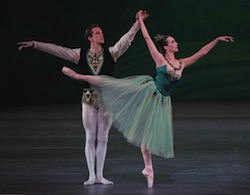 During her career with NYCB, Ringer has originated featured roles in works by Melissa Barak, Eliot Feld, Robert La Fosse, Miriam Mahdaviani, Peter Martins, Kevin O’Day, Twyla Tharp, Alexei Ratmansky, Helgi Tomasson and Christopher Wheeldon. She has also danced an extensive repertory of leading roles in works by George Balanchine and Jerome Robbins. In 2011, Ringer was the recipient of both the Dance Magazine Award and the Jerome Robbins Award.

In February 2014, Viking Press will publish Ringer’s memoir, Dancing Through It: My Journey in the Ballet.

“I have loved dancing beside the incredible artists of NYCB,” Ringer told Dance Informa. “These dancers work so hard and care so much. Their technique, individuality, discipline, artistry and humor have inspired me and gotten me through many difficult days. I will miss that community of friends and the bond we have all shared dancing together for so many years.”

In December 1997, Ringer received her B.A. in English from Fordham University; and in July 2000, she married former NYCB principal dancer James Fayette. Ringer has also taught at the School of American Ballet and is the Artistic Director of the New York State Summer School of the Arts, which is located in Saratoga Springs, NY.

Ringer is planning to announce details about her future plans later this year.

Janie Taylor and Sébastien Marcovici, who were married in 2012, will dance their final performances on Saturday, March 1 at 8 p.m., performing together in Robbins’ Afternoon of a Faun and Balanchine’s La Valse.

During her career with NYCB, Taylor has originated featured roles in ballets by Martins, Benjamin Millepied, Justin Peck and Richard Tanner. She has also danced an extensive repertory of featured roles in ballets by Balanchine and Robbins, as well as in works by Ratmansky, Susan Stroman and Wheeldon. Taylor also appeared in Columbia Pictures’ feature film Center Stage in 2000.

Marcovici, originally from Paris, originated roles with NYCB in Robbins’ Brandenburg and West Side Story Suite, as well as in works by Martins, Mauro Bigonzetti, Bonnefoux, La Fosse, Mahdaviani, Millepied, Angelin Preljocaj, Twyla Tharp and Wheeldon. He has also performed featured roles in numerous works by Balanchine and Robbins, as well as additional works by David Parsons and Lynne Taylor-Corbett.

Looking back on her career with Balanchine’s company, Janie Taylor remarked, “I have always loved to dance and move, but the discovery of Balanchine illuminated me. It has been the greatest privilege to perform his works, which have stirred so much passion in me, with the company he created. There is a magic that lives in the walls of this theater that I will miss feeling around me.”

Marcovici, too, will miss his time with the company. “Dancing with New York City Ballet has been a magical journey,” he said. 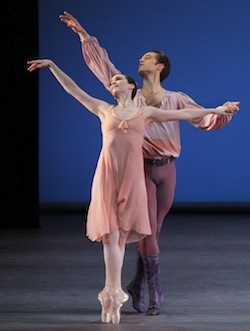 Jenifer Ringer with Jared Angle in Jerome Robbins’ ‘Dances at a Gathering.’ Photo by Paul Kolnik.

“Coming from a very classical background and stepping into Mr. Balanchine’s world made me question everything I had learned. But very quickly it all made sense to me, and I knew I had come upon something really special. Being surrounded constantly with genius choreography by George Balanchine and Jerome Robbins was inspiring and fulfilling, which always left room to grow artistically and technically. The level of respect for the choreography, the musicality and the attention to detail I have for all these ballets is more than I ever thought I could feel. Leaving New York City Ballet is not just leaving a dance company and all the amazing people that I have danced with and become friends with, it’s leaving a very unique place.”

Following their final performances with NYCB, Taylor and Marcovici will relocate to Los Angeles, California, where Marcovici will begin a new position as a ballet master with L.A. Dance Project, the artist collective that was co-founded in 2012 by the choreographer and former NYCB Principal Dancer Benjamin Millepied.

Jonathan Stafford will give his final performance on Sunday, May 25 at 3 p.m. performing in Balanchine’s Emeralds and Diamonds, from NYCB’s full-length production of Jewels.

Stafford, too, has close relationships with the other dancers in the company. His sister, Abi Stafford, is also a NYCB Principal Dancer and he is engaged to NYCB soloist Brittany Pollack. 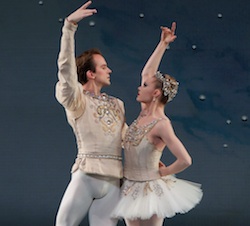 “Dancing with the New York City Ballet for the last 15 years has truly been a dream come true. When I retire from the stage, what I will miss the most will be performing our great repertoire of ballets in front of the best audience in the world,” he said.

In 2006, Stafford became a guest faculty member at the School of American Ballet, and has been a member of SAB’s permanent faculty since 2007. He will become a Ballet Master with NYCB and will also continue to teach at SAB following his retirement from dancing.
“I am very excited for my transition to the artistic staff as a ballet master—I look forward to passing on my experiences from the stage to the next generation of dancers,” he shared.

Tickets for all of the farewell performances are available online at www.nycballet.com, by phone at 212-496-0600, or at the David H. Koch Theater box office, located at Columbus Avenue and West 63rd Street in NYC.