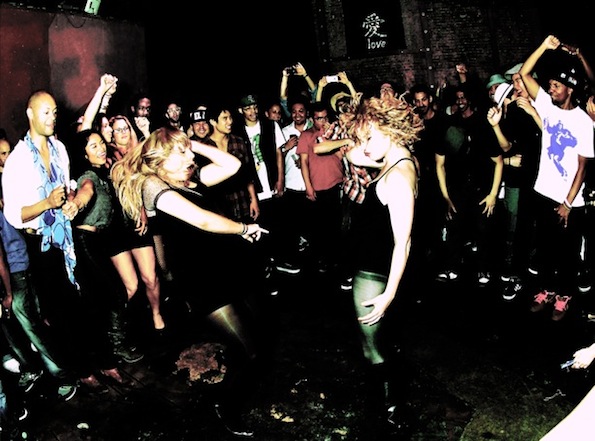 Los Angeles-based Floor Productions recently enjoyed its fifth birthday, celebrating the success it’s had in hosting unparalleled dance events that unite the various dance forms of its city. Combining the “raw essence” and spontaneous nature of improv with high-caliber venues and supporting musicians, the organization is certainly achieving its mission – to “entertain, transcend and inspire audiences and artists alike, using authentic talent to create unforgettable experiences.”

Comprised of three entities, Floor Productions is like a well-oiled machine, running with impressive efficiency to produce amazing productions. The first entity, simply entitled THE FLOOR, is what inspired the take off of the organization and still continues to fuel the other off-shoots. A monthly event, THE FLOOR is basically an improv night between musicians and dancers of all genres. It launched on July 20, 2008 when Floor Productions’ Founders Carolina Cerisola and Sascha Escandon partnered with King King, a local nightclub positioned in the heart of Hollywood. And the event was wildly successful! Yet, the road that led to THE FLOOR’s launching was long and windy, as it took over a year to come together.

Before creating and founding Floor Productions, professional dancers Carolina Cerisola and Sascha Escandon were just acquaintances, at best long-distance friends. Carolina, originally from Buenos Aires, Argentina, had met Sascha, a Los Angeles native, in the salsa competition sphere, where both performed and competed for many years. Sascha, who had previously danced with renowned L.A. salsa dance companies Los Rumberos and Salsa Brava, was returning to L.A. after working abroad when she reconnected with Carolina, who was headlining at then hot-spot Forty-Deuce, one of the first Burlesque Cabarets in Hollywood.

The two immediately hit it off when they began discussing a vision for a new dance organization in L.A. Sascha explains, “So we both had this idea and it ended up being kind of the same idea – a really well thought-out Latin show that showed the best of the best of each Latin genre and the real representatives of those crafts.” 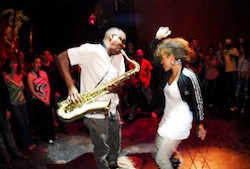 A saxophone player and dancer at THE FLOOR. Photo by Kevin Hahn.

The next step was committing to staying in the city for a while to define, establish and launch the organization. “So we decided to move in together in order to go into business together,” Sasha explains. “While it was kind of risky cause we didn’t know each other that well at the time, we also knew it was what we needed to do to make this work.”

So after basing themselves in L.A., the two set out to thoroughly research the local dance scene and to network with both dancers and musicians. It was then the idea of THE FLOOR first came to them.

“One night we were at Carolina’s friend’s house for a dinner party. Her friend, who is an amazing piano player, composer and musical director, had some other musicians over,” Sascha remembers. “A musical jam session started and really began to take off. Carolina and I were just lounging and listening when we just looked at each other and had a shared ‘aha moment.’ We knew we needed this to be a part of what we were creating because it exposed the creativity in process – the shifting and becoming in the musicians’ improvisation.”

After more research and more inspirations, ideas started to really churn and formulate. They started pairing various styles and ideas and playing with possibilities. “We started adding and layering, saying, ‘Well, what if we added a dancer with a horn player’ and etc.,” Sascha says. “We just kept layering and all of a sudden came this idea – what would become THE FLOOR.”

Going into the first FLOOR, Carolina and Sascha didn’t know exactly what to expect in people’s feedback, but they were hoping for something positive. Carolina explains that it was a difficult idea to get across to dancers and performers who weren’t as accustomed to improvisation.

“I think in the beginning people were unsure. But it only took two shows for dancers to start to get it and say, ‘Oh! I get it! It’s a place to hang out, play with what’s possible and have a good time,’” Carolina says. 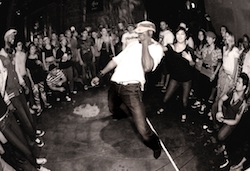 A hip-hop dancer performing at THE FLOOR. Photo by Kevin Hahn.

And by the time attendees started to understand THE FLOOR, the event’s popularity grew due to word of mouth. For Carolina, the best part of the event is that it “has brought so many people together.” And Sascha agrees, saying, “It’s like we tapped into all these little separate worlds and pockets of dance in L.A. and brought them into one big mixed pot.”

She further explains, “While L.A. is one big melting pot of cultures and ideas, most of these cultures tend to stay with their own. And while this is great in a sense because it helps keep their crafts pure, at the same time, this separates everybody. So with THE FLOOR it’s been so nice to witness some dancers see and be exposed to other’s crafts. It is nice to see these cross cultures and crafts come together in a place where they aren’t performing and they’re all equal and level. Everyone is sharing what they do and creating this collaborative, positive vibe instead of just saying, ‘Let me show you what I can do.’ It’s very, very welcoming and positive.”

At any given night of THE FLOOR, attendees might see hip-hop, flamenco, tapping, b-boying, swing dance and more. Since it’s an improv night, the atmosphere is always lively and brimming over with an ever-rising, spontaneous energy.

“There might be a specific night where a whole crew of people are in town for a swing convention and we’ll have 20 swing dancers show up. Then we might have some b-boys walk in or some tappers and suddenly there’s a mixture that sparks something interesting,” Sascha says. “The energy that is created is unbelievable.”

The second entity of Floor Productions is inspired by this energy and unhindered freedom. Named THE SHOW, it pulls from what happens at THE FLOOR to create an annual show packed with top-notch dance and musical talent. Producing passionate and culturally diverse vignettes, THE SHOW is set to all original music by musical director Carlos Rodgarman. It brings together 40 dancers with an eight-piece all-star band whose combined resumes include Stevie Wonder, American Idol, Christina Aguilera, George Lopez Tonight Show, Jordin Sparks, Andy Garcia’s CineSon All-Stars and more.

“THE SHOW is a more produced version of THE FLOOR meant to appeal to a broader audience that wouldn’t necessarily go to a nightclub but might still enjoy the experience that happens at THE FLOOR,” explains Sascha. 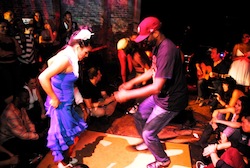 A flamenco dancer and tapper improvising at THE FLOOR. Photo by Kevin Hahn.

To maintain the immersive-feel, THE SHOW was created to happen all around viewers, not like a typical perineum style theater performance. It pulled from the energy of flamenco dance clubs, with the musicians, dancers and spectators all on the same level.

“We didn’t want to make it feel showcase-y,” Sascha says. “So, it happens all around you – behind you, to the right, to the left, up above you and down beneath. We have artists that masquerade as part of the audience and then just come out and start dancing as part of the show. So it’s a unique experience.”

And much like THE FLOOR, the annual production has been embraced by the local community – dancers and non-dancers alike. It exposes viewers to the diverse spectrum of dance, while also showcasing the multiple commonalities between the forms. Those who might consider themselves dance newcomers can often be found alongside those who have been dancing their entire lives as THE SHOW’s audience participation segments get all viewers interacting and engaged.

“We sometimes get the viewers to layer in rhythm with one section stomping their feet, another shaking can shakers and another clapping,” Sascha says. “It’s wonderful getting to see people engaged and excited.”

From this occasion of engagement and interaction came the idea for the third entity of Floor Productions, a nonprofit that would teach younger generations to experience the joy of self-expression through dance, music and improvisation. Termed the OPEN FLOOR SOCIETY, it pulls upon the organization’s amazing network of artists to teach kids.

Along with starting this new initiative, Floor Productions also recently announced plans to take THE SHOW on a national tour. The first six cities will most likely be New York City, Chicago, New Orleans, Las Vegas, San Francisco and Austin.

“The bigger picture is to have all three entities connected wherever we go. So, for example, if we tour The SHOW to New York, we would also host THE FLOOR improv as a backstage after-party and then host workshops throughout the weeks to underserved youth,” Sascha says.

Overall, Floor Productions has truly made a dent on the L.A. dance scene, and now the popular organization is expanding its reach even more. For Sascha and Carolina, the organization has become so much more than they could have ever dreamed. When thinking about the effects Floor Productions has not only had on their own lives, but also on the dance and music scenes in L.A., the two are truly stunned and thankful.

Sasha summarized their excitement and gratitude when she said: “To feel like you just dropped one rock and all these ripple effects are happening – that is just amazing.”

To follow Floor Productions’ events and to keep up to date on the organization’s endeavors, visit http://thefloorproductions.com. Monthly FLOOR dates are posted on the site.